Tyler Gruetzmacher's home in the city of Barron took a direct hit when severe winds blew part of a silver maple tree onto his roof damaging eaves and knocking over a chimney. Rich Kremer/WPR

Powerful storms that swept through Wisconsin this weekend have left thousands without power, damaged buildings and are being investigated in several deaths and injuries across the state.

The series of storms that moved across the state on Friday night and Saturday, brought heavy rains and fierce winds that downed trees and damaged buildings. Storm damage was reported across Wisconsin, from western Wisconsin to the Milwaukee and Green Bay areas on the eastern part of the state. This weather came as many parts of the state were already under a heat warning.

Authorities are investigating whether a storm on Saturday was a factor in two deaths.

The Milwaukee-based utility said crews from Wisconsin and neighboring states will continue to work around the clock until all customers have been restored.

Over 700 wires were down, 50 power poles snapped and broken, and over 600 trees or branches had fallen into the company's equipment. The company planned to clear those hazards, then start restoring power.

During Friday's storms, wind gusts reached more than 80 mph in some areas as the storms toppled trees from western Wisconsin to Green Bay. There were multiple reports of trees falling on homes and other structures.

In Turtle Lake, winds ripped part of the roof from a bar and bowling alley. The Milwaukee Journal Sentinel reported that a confirmed tornado destroyed a barn in Marathon County.

Tornadoes Touch Down In Central Wisconsin

In central Wisconsin, one of three confirmed tornadoes on Friday touched down in Knowlton, destroying a family's barn and farm shed. Lorraine Wodjac said she and her husband took shelter in their basement just before it happened.

"I got the message saying: tornado, take cover," Wodjac said. "We had 30 seconds and we went downstairs and no more than (we'd gotten) downstairs, it happened.”

Wodjac said her mind was blank at the time. Not far away to the east, Eugene Cincera, along with his sister, Marie, and their border collie, Frank, also took cover. 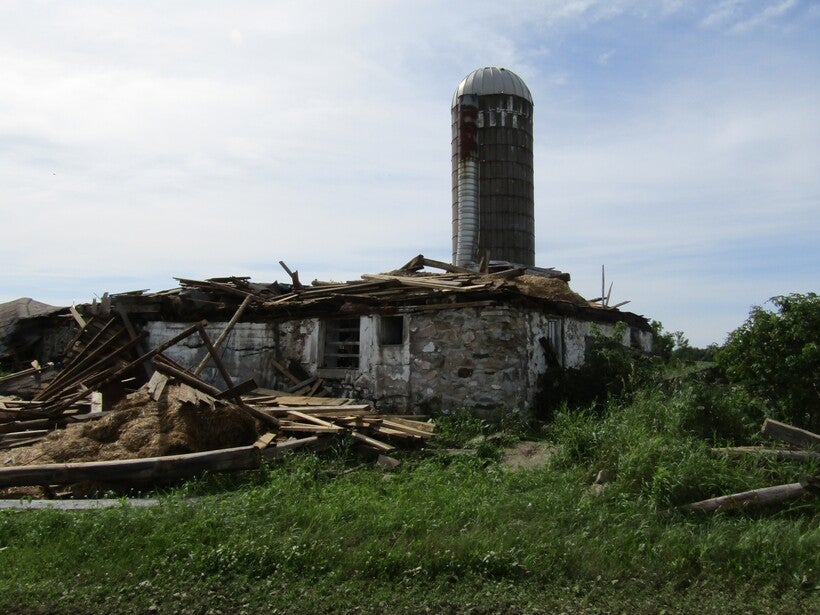 A tornado on Friday destroyed a barn and farm shed in Knowlton, Wisconsin. Rob Mentzer/WPR

"It sounded like a freight train," Cincera said. "It just started turning and boiling like something was coming."

The storms took out large trees on the Cinceras' property both Friday and Saturday, but neither the wind nor the downed trees did damage to structures on their property. 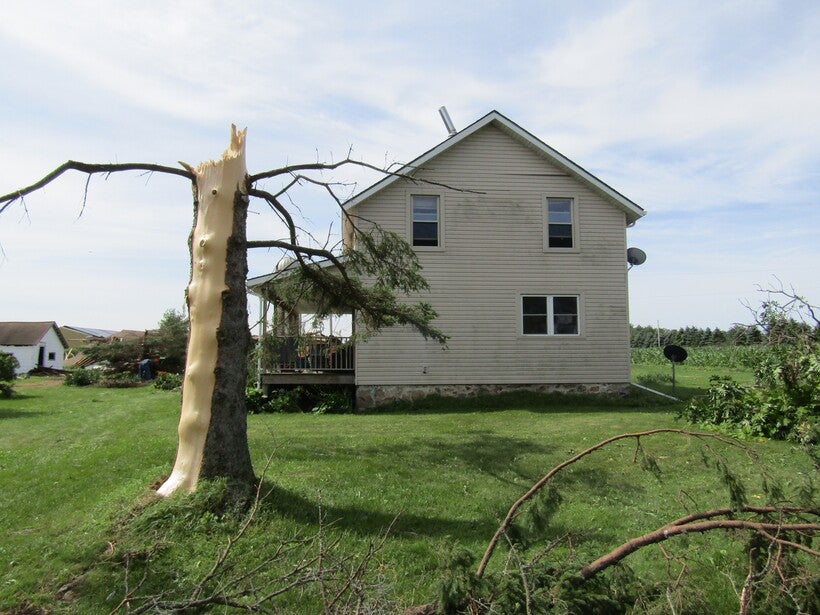 A tree in front of a home in Knowlton was snapped in half by a tornado Friday night. The tornado destroyed a barn and farm shed on the property, but didn't damage the house. Rob Mentzer/WPR

Like many across the state, the Wodjacs and the Cinceras were out Sunday cleaning up, the sound of chainsaws heard nearby and in the distance.

Nearby in the city of Barron, a tangled mess of downed trees, street lights snapped from wind and downed power lines blocked numerous streets Saturday afternoon.

Barron County Sheriff Chris Fitzgerald said some storm damage was widespread across the county. He said some of the hardest hit areas included Turtle Lake, Comstock, Almena, Barron and Chetek.

A large white pine was toppled by strong winds at this rental home on the corner of Barron's East Division Street and Sainte Marie Street. Rich Kremer/WPR

"I know our highway shop was out clearing roads for us Friday night with their snowplows on just to get trees off the road," Fitzgerald said. "It’s just a devastating storm but thankfully we have zero injuries. With all these trees down it’s a miracle that there’s zero injuries."

Tyler Gruetzmacher and his family were clearing trees and branches from his yard Saturday. He said he was on his way home when the storm hit Friday evening he said the wind and debris blowing across the road were bad enough that he sought shelter at a nearby farm. When he got home, he found tree trunks had knocked over his chimney and broke through the eaves of his roof.

Branches from the pine also broke through the home's garage. Rich Kremer/WPR

Assisting in Saturday's cleanup in Barron was a group of Jennie-O employees from Willmar, Minnesota, about three hours west of Barron. Jennie-O area supervisor Adam Cavazos said his crew began seeing severe storm damage miles outside of the city. He said the team was heading to Barron to help repair a roof at a nearby Jennie-O turkey farm, but power outages delayed their work. So, Cavazos and the crew began hauling and stacking branches in neighborhood yards.

"And I figured well, there’s enough need out there in the community," Cavazos said. "So, I asked my guys if we could go out there and help out for a couple hours while we waited."

Parts of the tree damaged a company truck driven by the renter, who declined to be interviewed. Rich Kremer/WPR

Residents in western Wisconsin were cleaning up after Friday's storms downed several trees and power lines and damaged buildings.

The cities of Milwaukee and Waukesha posted a list of cooling sites online, where residents without power could go to stay safe in the intense heat.

The Trempealeau County Sheriff's Office said that one woman in Galesville was cut by flying glass Saturday when a window blew in during the storm. A man in the Town of Gale was also injured when he was hit by a tree that fell into a camper he occupied.

WSAW-TV reported that fire officials in Wausau are investigating whether a lightning strike caused a mobile home fire that left one man dead Saturday.

On the positive side, Saturday's storms broke the heatwave in Wisconsin, with Sunday highs forecast in the upper 70s and low 80s under partly to mostly sunny skies.