In its findings? The Facebook URL with the most views over the past three months is Player Alumni Resources, a site where people can pay to have former Packers players appear at events. The page had 87.2 million views, according to WIRED, and is run by former Packers kicker Chris Jacke.

How'd Jacke do it?

"The answer: memes," writes WIRED. "From his personal account, which has more than 120,000 followers, Jacke posts a steady stream of low-rent viral memes that have nothing to do with the Packers, adding the URL of his business to the top of the post."

The seven-day average for new COVID-19 cases in Wisconsin is 1,241 as of Friday — the highest that figure has been since February. The Wisconsin Department of Health Services has confirmed 7,516 total deaths from the disease.

Fifty percent of Wisconsinites are fully vaccinated — 82.2 percent of people age 65 and older and 32.4 percent of children age 12-15. 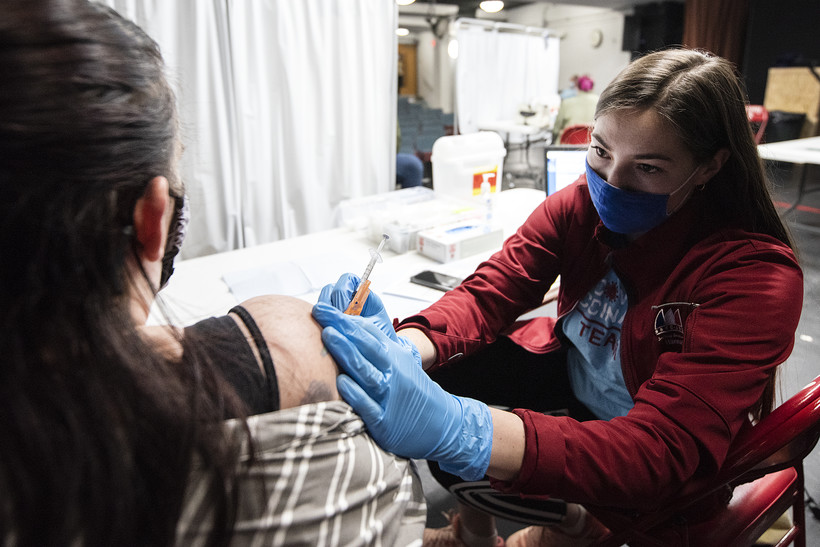 A Pfizer-BioNTech COVID-19 vaccine is given at a clinic set up at a high school theater Tuesday, May 4, 2021, at St. Francis High School in St. Francis, Wis. Angela Major/WPR

Seasonal Summerfest Workers Get A Raise

On Monday, Milwaukee World Festival, Inc. announced the company will be raising wages for most seasonal workers. The move is part of preparations for Summerfest, which will take place Sept. 2 to 4, 9 to 11, and 16 to 18.

Seasonal workers will earn $2 to $3.50 more per hour beginning Aug. 15, according to the release from Milwaukee World Festival, Inc.

As part of funding from the U.S. Department of Education in the American Rescue Plan Act’s Homeless Children and Youth Program, the Wisconsin Department of Public Instruction will be allocating more than $10 million. The funds will be used to assist school districts with identifying and providing support for students who are experiencing homelessness.

On Aug. 16, the Evers Administration announced how it has allocated, and would continue to allocate more than $4.5 billion in federal coronavirus relief funds.

"Over the last eighteen months, we’ve made critical investments to get help to those who need it, get shots in arms, and put our state and our economy in the best position to recover and bounce back from this pandemic," Gov. Tony Evers said in a press release. "Getting the COVID-19 vaccine is an essential part of putting this pandemic behind us as we work to make key investments that will not only support our state’s continued economic recovery but build the future we want for our state."

So far, more than $2 billion has spent on emergency response efforts, public health measures and pandemic support for businesses.

With COVID-19 cases rising due to the more contagious delta variant, the Evers administration has allocated $525 million more to ensure state agencies and local partners can adequately respond to the pandemic.

A summary of planned allocations with the remaining federal funding include:

The Packers 50s Classic Uniform Takes The Field In October

Well, would you look at that. The Green Bay Packers are going to be sporting a new uniform that pays tribute to the 1950s, a decade full of excitement for the team, the Post Crescent reports.

While some may say it reminds them of the University of Oregon Ducks, others say it’s a mix of old and new. The 50s Classic Uniform has a darker green color compared to the Kelly green jerseys of before, according to the Post Crescent. The yellow pants were also ditched for dark-green pants.

The Pack will wear the uniforms against the Washington Football Team on Oct. 24 and then one game a year for the next five years, according to the paper.

Dane County Sheriff's Department To Use 'Residents' For Incarcerated People

The Dane County Sheriff's Department announced this week it will begin referring to incarcerated people as "residents" rather than "inmates."

"I believe our philosophies, policies and practices should be proactive and not reactionary like many other areas of our criminal justice system," Sheriff Kalvin Barrett said.

Education Department Will Erase $5.8 Billion In Loans For Borrowers With Disabilities

The U.S. Education Department announced Thursday that it's canceling outstanding student loans for more than 323,000 borrowers with significant, permanent disabilities. The agency will also remove barriers for borrowers who qualify for this relief in the future, NPR reports.

"Today's action removes a major barrier that prevented far too many borrowers with disabilities from receiving the total and permanent disability discharges they are entitled to under the law," U.S. Education Secretary Miguel Cardona.

The federal Total and Permanent Disability Discharge program is supposed to wipe out student loan debt for Americans who can't work due to a significant disability.

Before Thursday's announcement, borrowers had to apply for the relief. Now it will be automatic for those who are identified through a data match with the Social Security Administration.

The department expects more than 323,000 people to receive relief amounting to $5.8 billion during September's data match.