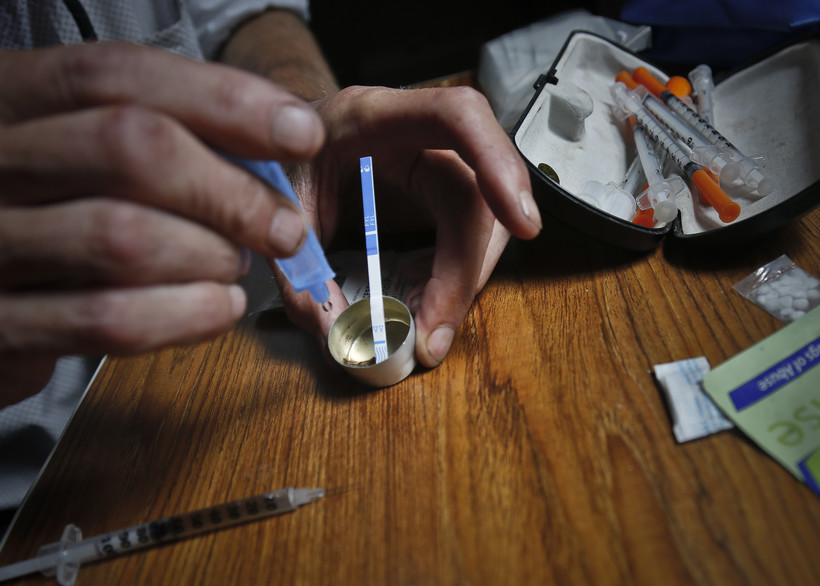 An addict prepares heroin, placing a fentanyl test strip into the mixing container to check for contamination, Wednesday Aug. 22, 2018, in New York. If the strip registers a "pinkish" to red marker then the heroin is positive for contaminants. Bebeto Matthews/AP Photo

According to the Milwaukee County Medical Examiner’s Office in a tweet, last year Milwaukee had 407 fatal drug overdoses, exceeding the previous record high of 401 in 2017.

"We are now at 407 confirmed overdose deaths for 2019, which is the highest ever," said Karen Domagalski, operations manager with the medical examiner’s office, "We still have approximately 15 cases pending additional toxicologies so that number is going to grow."

The office plans to release a full report once all 2019 cases are complete.

Milwaukee Alder Michael Murphy is the chair of the City-County Heroin, Opioid, and Cocaine Task Force, a committee that is raising awareness through creating initiatives and programs.

He said he was hoping for a better outcome.

"It demonstrates that we haven’t plateaued," Murphy said. "We had hoped that there was starting to be a bit of a trend of some reduction from 2018 to 2017 but obviously now we are back up over that number."

"The drug we see the most is fentanyl, either alone or in combination with something else," she said. "We are now at 238 confirmed deaths in 2019 from fentanyl."

The trend in Wisconsin’s fatal drug overdoses differs from Milwaukee County's. According to the state Department of Health Services, in 2017 there were 1,185 overdose deaths and 1,076 in 2018. The data for 2019 has not been published yet.

Domagalski said at the rate Milwaukee County is going in 2020, they could surpass last year’s high.

"This year is also starting out quite high if numbers continue," she said. "As to what we’ve seen since the first of the year, we are probably going to see over 500 overdose deaths this year."

But Murphy said he’s hopeful that with the programs in place, the task force can help people seek treatment.

"We’re not giving up," Murphy said. "Sometimes there’s one step forward and two steps back, but we are committed to trying to find solutions for so many people who are suffering."