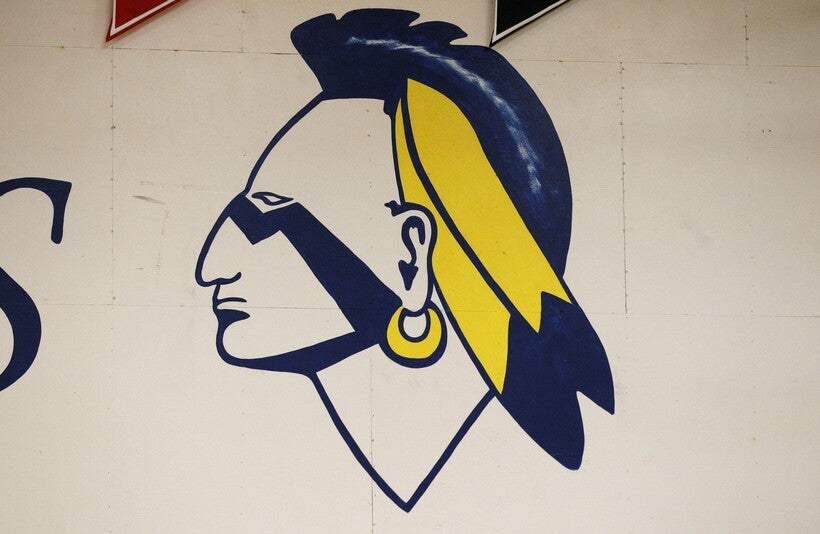 The Banks High School mascot is shown on the wall of their gym Thursday, May 17, 2012, 2012, in Banks, Ore. The Oregon Board of Education is scheduled to vote on a resolution that would require Oregon schools to retire their Native American mascots within five years or risk losing state funding. Rick Bowmer/AP Photo

The Wausau School Board passed a resolution calling for lawmakers to ban Native American mascots at Wisconsin public schools districts.

The board approved the resolution in a unanimous vote last Monday. It calls for the state to mandate the removal of Native American mascots, symbols, images, logos and nicknames on the basis that their usage impairs the educational experiences of all community members.

"They establish unwelcome and hostile learning environments for Native American students," Zunker said. "They teach students that it's OK to engage in culturally abusive behavior."

A student can still come into contact with stereotypes and offensive images even if their school’s mascot isn’t a Native American, Zunker said. Visiting school sports teams wear the logo on their jersey. Students sections with Native American mascots may paint their face red or wear feathers.

The Wisconsin Association of School Boards will look at the proposal in September. If it is approved by the Policy and Resolutions Committee and then at the annual Delegate Assembly meeting in January, the association can lobby legislators about the issue.

The school board’s resolution is a timely part of the effort to remove Native American nicknames and mascots, Zunker said, which has resurfaced in Wisconsin communities and in the Legislature over the years.

"The time is now," Zunker said. "In fact, it’s overdue. The time was decades ago, but we can’t undo the past."

The American Psychological Association called for immediate retirement of Native American mascots, logos and nicknames back in 2005. A study they conducted found their use causes harm to the social identity development and self-esteem of Native American students.

Barbara Munson is a member of the Oneida Nation and chairwoman of the Indian Mascot and Logo Task Force — part of the Wisconsin Indian Education Association. She said non-Native students are also harmed when they witness derogatory stereotypes.

Removing Native Americans as mascots is one step in the process of lifting stereotypes, Munson said. Another key element is education.

"What we really need is to teach accurate and authentic information about different groups and about different individuals so that we are not dealing with stereotypes that lead to prejudice," Munson said.

Wisconsin passed Act 31 in 1989, which required schools to teach about Wisconsin Native American tribes and tribal sovereignty at least three times during a student’s K-12 career. Not all schools obey the law, Zunker said, but she hopes the resolution will spark more compliance.

Correction: This story was edited to clarify that this resolution refers to all public schools, not just high schools.