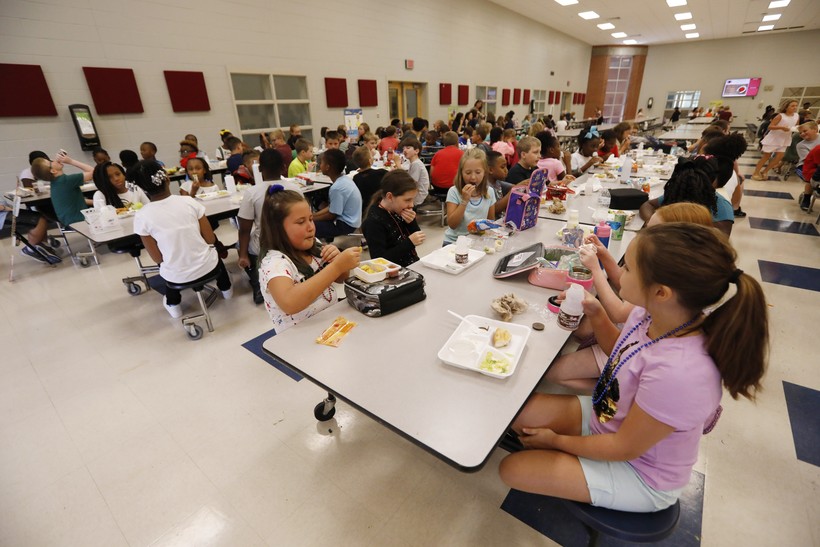 Waukesha Was Only Eligible Wisconsin District To Opt Out Of Federal Program
By Madeline Fox
Share:

The Waukesha School District's Board voted 5-4 Monday night to rescind its June decision not to participate in a temporary federal program that provides free school lunches to all families regardless of income after previously being the only eligible Wisconsin school district to opt out.

"As I learned more about some of the situations that exist in our community, I became concerned that our administration wouldn't be able to reach them all," said Board President Joseph Como Jr. "I believe it was important to make sure that all children were fed, and I also believe that this program should not exist forever, and this board needs to make sure it does not continue forever."

Before the COVID-19 pandemic, students could get school lunches for free, at a reduced rate or by paying full price — though even full-price school lunches are partially federally subsidized. Under the Seamless Summer Option, which began during the pandemic and was later extended through June 2022, all students within the community under age 18 are eligible for free meals, regardless of their income and without requiring them to apply.

The Waukesha School Board voted unanimously in June not to continue with the Seamless Summer Option that provides universally free meals. Instead, the board opted return to the pre-pandemic National School Lunch Program, which offers the free and reduced-price options to families who apply and are approved. Waukesha received national attention last week for being the only school district — out of Wisconsin's 408 districts eligible for the Seamless Summer Option — to reject it.

At Monday's meeting, the board voted to take up the Seamless Summer Option although several of the board members who voted in favor said they, like Como, saw it as only a temporary solution.

Board member Greg Deets said he's learned more about his community's needs and the program since his initial vote in June, which prompted him to change his mind.

"The truth is that many of our students are hungry throughout the school day, and we have the ability to do something about that," he said. "These are stressful times, and it is well known that hunger directly impacts our students’ behavior and their ability to learn."

Board members said they were inundated with calls and emails over the last several days, including threats.

Board member Karin Rajnicek said people left dozens of low-star reviews on her salon, a "five-star business that is no longer," and people also called and left voicemails hundreds of times within a few hours. She said she understands the value of programs for free lunch, which she said helped her family through a tough financial spot, but the district has resources to keep that going for families in need without the universal Summer Seamless Option.

"If we don't start saying 'no' with our government handing out more money that we can never get out from under, we won't have the services to help all these exact children and families that we want to help," she said.

Board member Kelly Piacsek said Waukesha has enough resources to feed students without the federal program. She noted that the district's nutrition program has a $1.75 million budget surplus, and said three of the neediest schools in the district already qualify for free lunches regardless of income level without the pandemic program.

"This SSO program is wasteful by design," she said. "It inappropriately combines meeting basic needs for struggling families with federally-backed perks for high income families... Think about how much more good we could do with our food services resources if they weren't wasted on families that had the means to pay."

Several board members worried the lack of an application process for free or reduced lunches would make it harder for school administrators to identify families in need not only of food, but of other school resources.

The applications were a concern for Patrick McCaffery, the board treasurer, who said students not filling out the paperwork that shows whether they need free or reduced lunch means schools will lack data on which students need additional support beyond food.

"We are going to have to deal with a student body that will be behind educationally, and we will need the funding that you get — attached to those forms — for Title I, or the community services, or any of that stuff to help bring our students back up to where we need to be," said McCaffery.

Some school nutrition professionals have been pushing to make the program permanent. They say districts saw an increase in demand when lunches were free and it cut down on lunch-shaming against kids receiving free or reduced lunch. Roddy, the board vice president, said that kind of data can be misleading.

"Numbers look skewed sometimes, like 'Oh, more people are using it,'" she said. "Well, it gave me 15 extra minutes in the morning that I don't have to make a lunch, yes, I'm going to use it."

Still, Roddy voted to reverse the board's June decision, though she stressed it was not because of the "mob" that had inundated board members' phones and emails.

"Through all this darkness, light has been shed on areas we need to address," she said. "If this program can help for nine months, whatever this school year is going to be, let's do it, but we then hold ourselves accountable and make sure we put systems into place so that we capture the data and the information that we need which will then help us with the learning gaps, and everything else that we need to address."

The school administration's recommendation was to reverse the board's June decision and recommend Waukesha participate in the Seamless Summer Option.

"The reasoning behind this administrative position is our belief that we could better capture as many kids as possible under this program, and that it would help families that may not qualify for free and reduced lunch but may be experiencing situational poverty because of the pandemic," said Superintendent James Sebert.

Board members and administration talked about deeper concerns with federal school lunch funding — that it sets some food prices at a higher price point than the district would otherwise choose, that it creates problems when the district finishes the year with too high a budget surplus in its food program, and that regulations prevent that surplus from being directly used to pay down school lunch debts for students who did not pay.

"This is exactly what happens when you let the federal government determine how we feed kids at a local level — we can't even figure out what's going on," said Montiho. "We're trying to fix this — the reason it's so complicated is because the feds are involved."