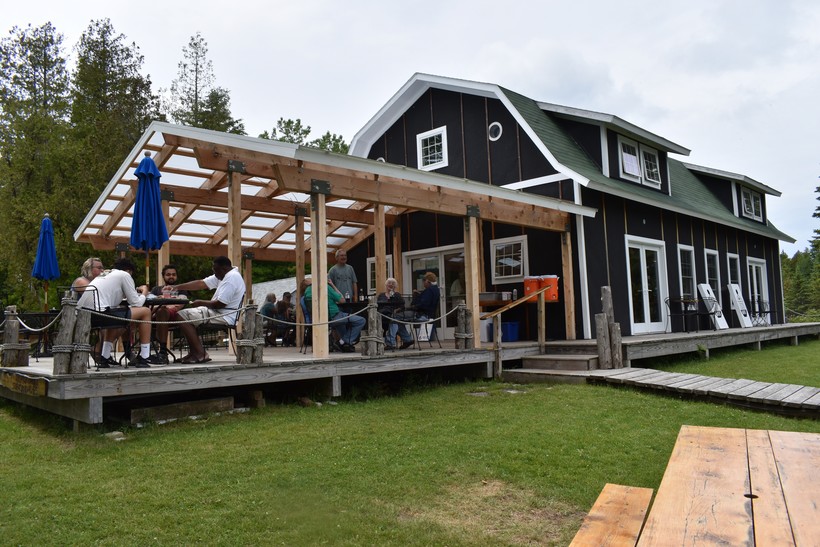 Diners eat al fresco at Jackson Harbor Soup and Sandwiches, a restaurant on Washington Island, on June 22, 2020. Tourism-dependent businesses on the island are seeking ways of adapting in the COVID-19 era. Rob Mentzer/WPR

On Washington Island, Businesses Welcome Tourists With A Mix Of Optimism And Anxiety

How An Isolated Door County Community Is Adapting To Tourism In The COVID-19 Era
By Rob Mentzer
Share:

It's about seven miles from mainland Door County to Washington Island, across a strait known as Portes des Morte, or Death's Door. It's an area dotted with the wrecks of 19th-century ships lost to unpredictable Great Lakes winds. It's the most isolated community in Wisconsin, with about 700 year-round residents, but the population on the lushly forested island swells by thousands during the tourist season.

That season, unusually compressed in any year, is only just now ramping up. Residents say July and August are their money-making months. And this year, as COVID-19 cases increase in Wisconsin, Washington Island businesses are faced with figuring out what a safe tourism season means in the age of coronavirus — and whether it's possible to open the island to outsiders while also protecting the close-knit residents of the island.

"Early in the crisis, there was a lot of 'Don’t come here' kind of stuff. Keep your virus downstate," said Bob Atwell, CEO of Nicolet Bank, who lives in Sturgeon Bay during the week and Washington Island on weekends. "But that's a hard message to give to a place that lives almost 100 percent on tourism." 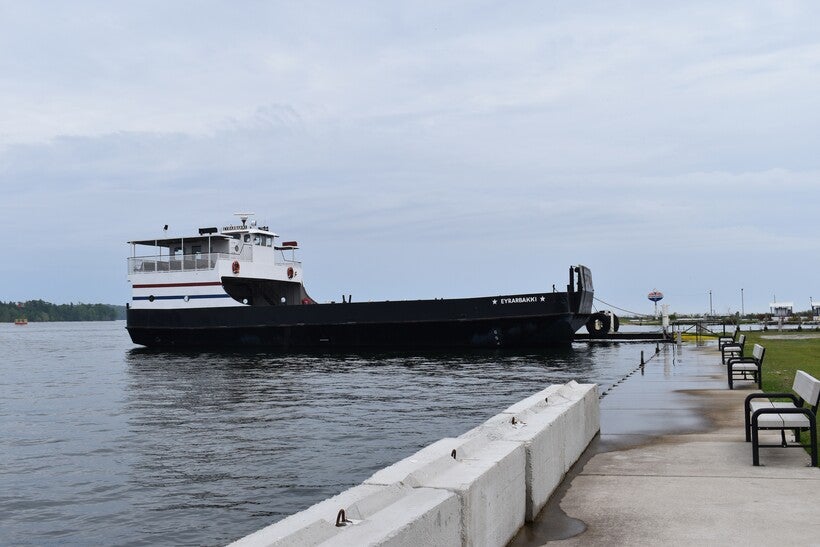 The Washington Island Ferry Eyrarbakki is docked on the island on June 22, 2020. Rob Mentzer/WPR 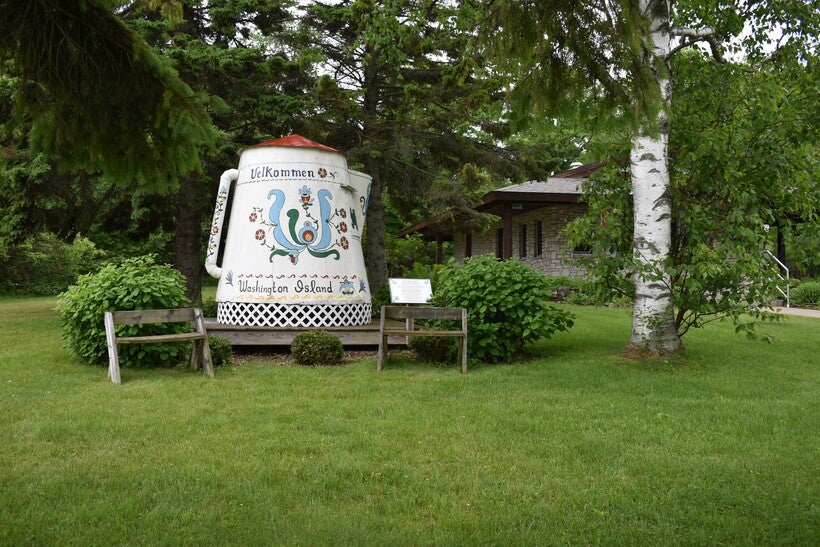 Washington Island is far from the only tourism destination in Wisconsin that's weighing the risks of spreading COVID-19 against the economic necessity of hosting out-of-town visitors. But it's one of the starkest examples in the state. In fact, residents say Washington Island is like a lot of places in rural Wisconsin — only more so.

Many rural communities have seen relatively few COVID-19 cases. Washington Island hasn't had a confirmed case yet. Rural school districts across the state are seeing long-term trends of declining enrollment. Signs posted around the island this month congratulated the district's only two 2020 graduates, a brother and sister. And while many tourist towns depend on summer business, relatively few have a peak season that's only two months long.

In a way, that short season made it easier for the island to shut down in April. Aside from a spring bird-watching event, there isn't much on the calendar then, anyway. The Washington Island Ferry Line, the only way on and off the island for most people, ran just two ferries a day in April and kept a restricted schedule even into June. For a period of that time, the ferries mostly carried packages and freight, not people and cars, said president Hoyt Purinton.

"We had to go back to the 1950s and '60s to see ridership numbers that low," said Purinton, who runs the company that was once owned by his great-grandfather.

Traffic has increased since the state Supreme Court threw out Wisconsin's statewide stay-at-home order, and since Memorial Day weekend kicked off the summer season. But ridership is not back to normal.

"Typically this time of year, in the past three or four years we would have 21 or 22 trips scheduled today," Purinton said on a Monday in late June. Instead, "we have 11 or 12 trips (planned), and we may run an extra boat or two." 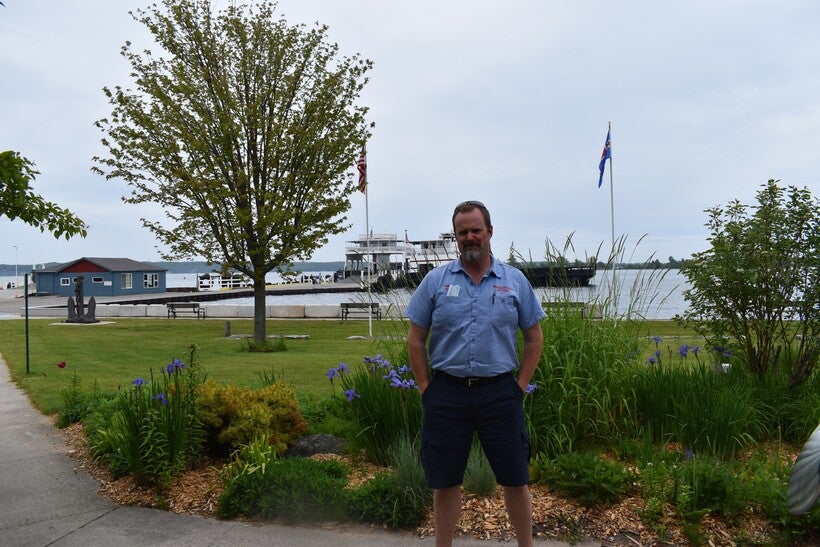 Hoyt Purinton, president of the Washington Island Ferry Line. Purinton is the fourth-generation owner of the business in his family. Rob Mentzer/WPR

The island needs visitors. But not everyone who lives there depends on the tourism economy. Besides some people who work in other fields, such as agriculture or manufacturing, there's another powerful demographic group in Door County: retirees. In general, they're the group that wants the least to do with outside visitors.

"Door County is a have, have-not place," Atwell said. "There are an awful lot of people who have money who come up here and want to control what happens around here. I don't want to overstate it, but there's a fair amount of tension between people who know they need to make a living and people who'd like to put the bridge up at Sturgeon Bay now that they're here."

Of course, it's not just retirees who worry that hosting thousands of out-of-town visitors isn't safe in coronavirus times. Tate Remke, 28, a bank teller and a barista at Red Cup Coffee House, said seeing the ferries fill up again does stir anxiety in her.

"I am (worried), personally," said Remke, who grew up on the island. "I have two elderly parents. I have a lot of elderly friends. I worry for the community and all the people that I love here."

'If there is a place to social distance, you're looking at it.' 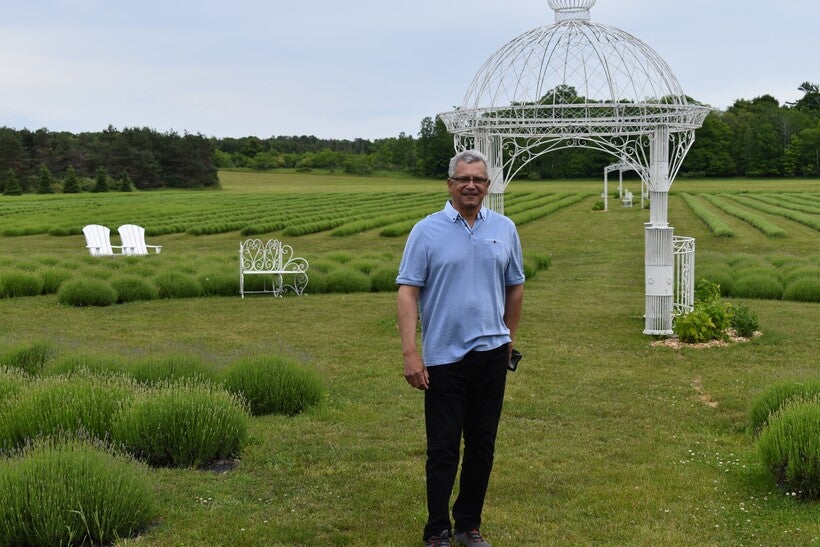 Edgar Anderson, owner of Fragrant Isle, gives a tour of one of the largest lavender farms in the Midwest. The plants will bloom in July and August. Rob Mentzer/WPR

For the first year after Edgar Anderson moved to Washington Island in 2011, he was just glad not to be at O'Hare Airport. A longtime executive for McDonald's Corp. when it was based in the Chicago area, flights in and out of the busy port had been his life. He was ready for a change, and he and his wife loved the way the island felt, both welcoming and far away from the rest of the world.

But Anderson, now 62, wasn't ready to retire. He and his wife Martine launched Fragrant Isle, now one of the largest lavender farms in the Midwest. The sweet, relaxing scent of the plants, from which they harvest oils, floats over the farm. They sell oil and lavender products, but their main business is tourism, hosting tours and demonstrations on the grounds.

"Lavender has a late-summer bloom," Anderson said. "That means we have a chance of really having a good season. People can still come and enjoy the beauty of it in the months of July and August."

Business is at about 70 percent of what it was last year, Anderson said, and he feels reasonably comfortable that Fragrant Isle will survive the COVID-19 recession. Visitors to Fragrant Isle are asked to wear a mask to browse the indoors shop, but outdoors on the expansive, well-manicured grounds, social distancing is not a challenge.

Compared to other places that rely on tourism, Wisconsin has two major advantages this year. The first is that a lot of what people want to do on vacations to the Northwoods or to Door County are outdoor activities that health officials say are relatively safe — or even recommended. Hiking, kayaking or visiting beaches all are considered low-risk activities. Many visitors to Washington Island rent mopeds or bikes, or simply drive on and off the ferry. And mild summers make outdoor activities palatable.

"People are tired of being cooped up and they want to be outside," said Julian Hagen, a musician and business owner on the island. "Many of our activities do take place outside, so people feel safe in that environment."

Or, as Anderson put it: "If there is a place to social distance, you’re looking at it." 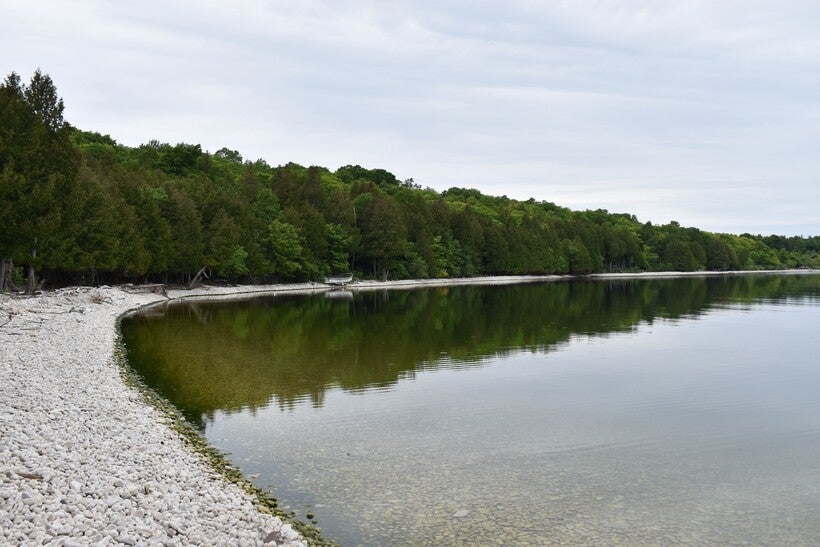 Schoolhouse Beach on Washington Island is a limestone beach, composed of smooth rocks rather than sand. Rob Mentzer/WPR 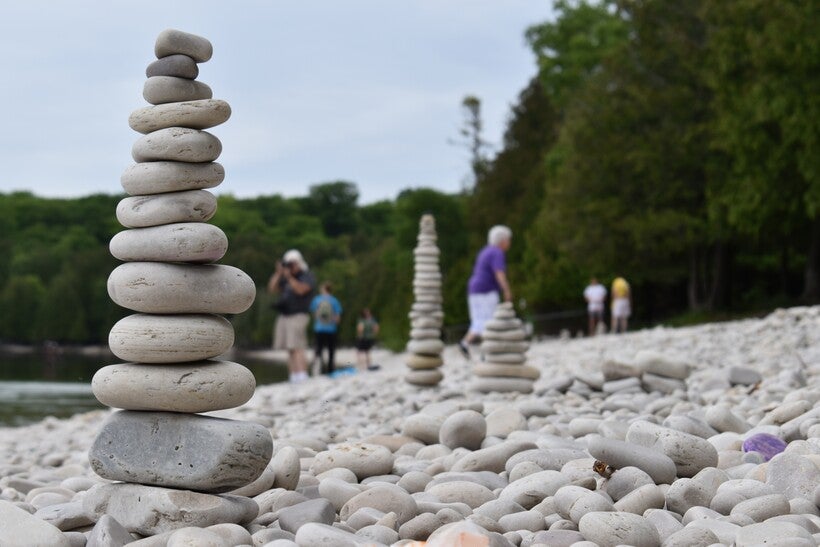 The other big benefit for Wisconsin tourism: Most people who visit, whether from the Chicago area, other parts of Wisconsin or elsewhere in the Midwest, come by car. Air travel has begun to pick up from its nadir in the spring, but it’s expected to take years for it to recover to pre-pandemic levels. And many families who’ve postponed or canceled planned airplane trips are planning closer vacations in their place. In May, tourism secretary-designee Sara Meaney said Wisconsin’s target market for tourists is those making regional driving vacations.

It’s too soon to know what the long-term impact of COVID-19 will be on the state’s tourism economy. But there are plenty of signs of demand in the sector. Washington Island town chairman Richard Tobey, whose family has been on the island for more than 100 years, rents out a historic family house to vacationers.

"We opened that up on a Monday (in late June) and by Thursday we were booked through the second week of September, solid," Tobey said. "So as far as people wanting to come to Washington Island, it sure looks like there are plenty of folks available."

Moving Forward Amid A 'Fragile' Economy

The windows at Jackson Harbor Soup and Sandwiches look out on the water and northwest to Rock Island, a state park that is still closed to visitors, and will be closed all year. There are picnic tables in the yard and al fresco dining under a sheltered patio. The restaurant has been open for five seasons. Sarah Gibson, one of the owners, said she didn't know if they'd open at all this year.

They started tentatively, serving takeout customers in April, and slowly added a day here and there. They added the picnic tables around Memorial Day. As of late June, she estimated the business was getting about 50 percent of the business it got last year.

"It's taken some time to get to that number," she said. "In the beginning of April or May we were at 20 percent." 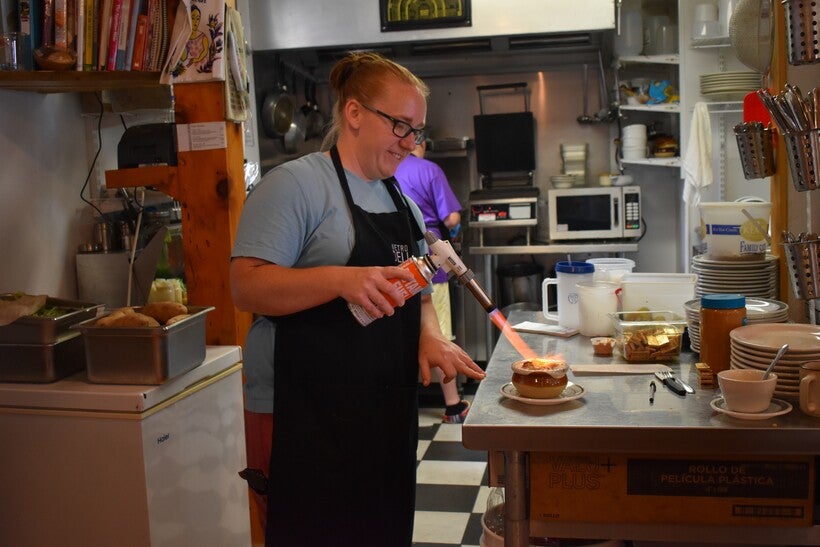 Sarah Gibson, one of the owners of Jackson Harbor Soup and Sandwiches, torches the cheese topping of a french onion soup. The restaurant is doing about 50 percent of the business it did at this time last year, she says. Rob Mentzer/WPR

But things are picking up, and the restaurant was doing brisk business for lunch, with outdoor tables full. Gibson says she thinks the shop will make it through the year.

"You hear 50 percent, and yeah, that's not a lot," she said. "But it's something. We're here to maintain what we can. It's not going to be a huge, booming season."

Gibson said she's hoping the weather will cooperate through summer, or even allow the tourist season to extend into the fall. She has the risks of COVID-19 in the back of her head, but it's not practical or possible for her to close the business down. So she's taking precautions for herself and her workers. And she hopes the tourists who visit the island town where she grew up will be considerate of others' health.

A lot of the people on Washington Island have deep roots there. Hagen’s family has been on the island for five generations. Like other residents, he’s proud and protective of the island, eager to share it with visitors and also a little worried about the future of its economy.

"It’s very tough," said Hagen, the musician and business owner. "Our economy is fragile, like anywhere else."