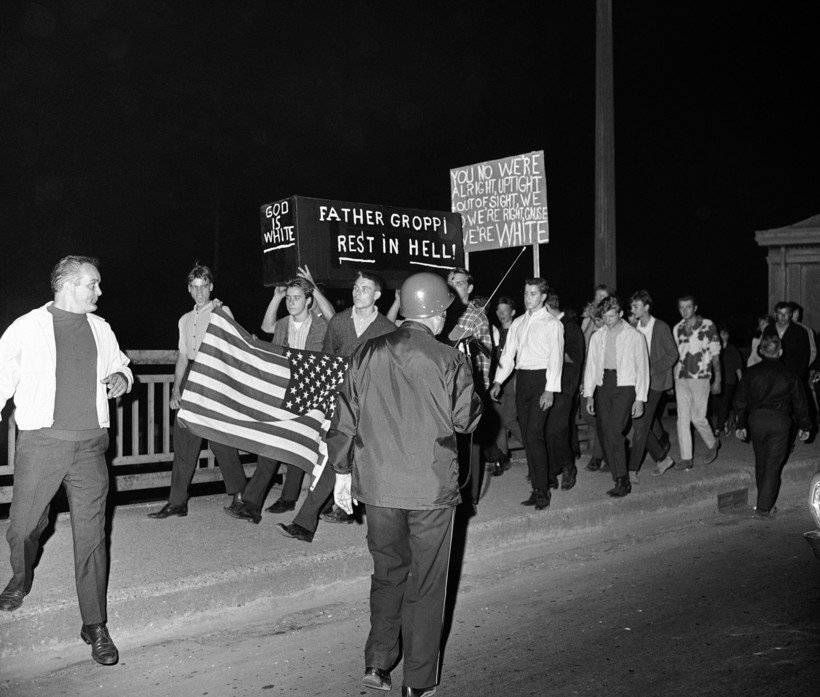 Milwaukee's South Side residents carry a simulated coffin as they march to North Side of city for rally at residence of Roman Catholic Archbishop William Cousins September 13, 1967. They are protesting activities of Father James Groppi, the white priest who has led Black open housing demonstrations the last 16 consecutive nights. AP Photo

Was your Wisconsin community a 'sundown town'?

A look at the past, present and future of racial restrictions in Wisconsin
By Rachael Vasquez
Share:

When asked to think about the history of racism in the United States, many people think first about slavery and segregation in the South. There's often less focus on the racism that existed, and continues to exist, in places like the Midwest.

That racism often took on different forms, including what were known as "sundown towns," communities that didn't allow people of color to be in the municipality after dark.

Wisconsin Public Radio received a WHYsconsin question about the history of sundown towns in Wisconsin. It came from Laurie Lambries after she found out the city where she lives, Manitowoc, was considered a likely sundown town.

"I was shocked," Lambries said. "I don't even remember when I first heard the term, but somebody was talking about it and (said), 'You know, 'sundown town,'' and I'm like, 'What's a sundown town?'"

Lambries said when she asked around about this history locally, there weren't many interested in providing answers.

"It was crickets," she said.

What we know about sundown towns

Sundown towns took off during the 1890s, and were located primarily in the Midwest, West and Northeast regions of the U.S. They were far less common in the South, in part because the South had its own racial system of Jim Crow segregation, Stephen Berrey, a professor of American culture and history at the University of Michigan, said in a recent interview on WPR's "Central Time."

Sundown towns were used to exclude Black, Jewish, Hispanic, Asian American and Native American people, Berrey said. Which group was targeted in a specific place often depended on the ethnic makeup of a particular region. 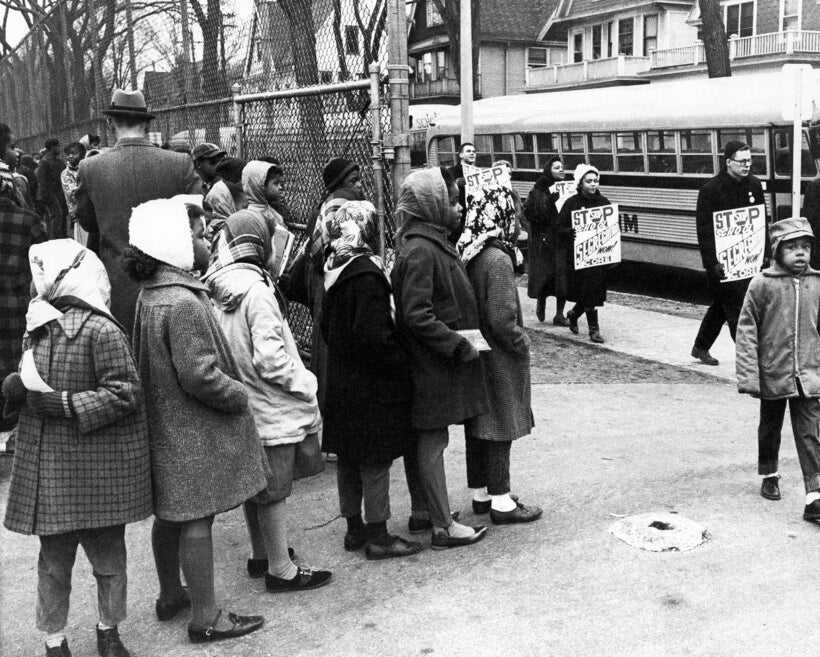 Youngsters at a near North side school wait to board a school bus while pickets from CORE and the NAACP parade in Milwaukee, Wisconsin, Feb. 3, 1963, in protest of what the groups call de facto segregation. Youngsters from this school are taken daily to three other schools because of overcrowding in second, third and fourth grades. AP Photo/Milwaukee Journal

Berrey said the rise of sundown towns came at a time when a growing number of Black people were moving North to flee racial violence as part of the Great Migration. Their rise also coincided with growing labor competition between white American and Chinese workers, and widespread anti-Chinese sentiment across the U.S.

In Wisconsin, three towns are classified as having "surely" been sundown towns: Appleton; Janesville; and Mequon, according to a database of possible sundown towns across the U.S. originally compiled by James Loewen, a now-deceased historian and author of the book "Sundown Towns: A Hidden Dimension of American Racism." Berrey and volunteers continue to update the database today.

There were an estimated 10,000 communities across the U.S. that qualified as sundown towns at their height in 1970, Loewen said.

How racial restrictions were enforced

In some communities, officials voted for a sundown town ordinance that made it illegal for people of color to be within city limits after dark. In other places, the restrictions were less formal.

Some communities had signs posted at the edge of town using racial slurs or other overtly racist language, warning people of color to not "let the sun go down on you in our town." 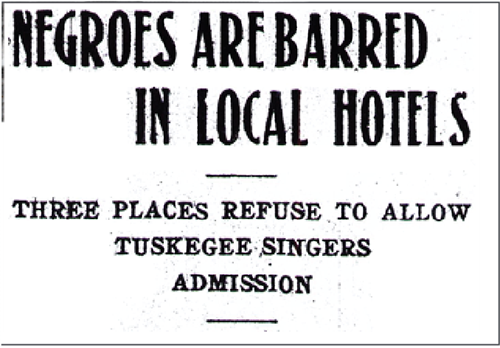 An excerpt from the Appleton Evening Crescent from Aug. 2, 1915. Photo courtesy of Sabrina Robins 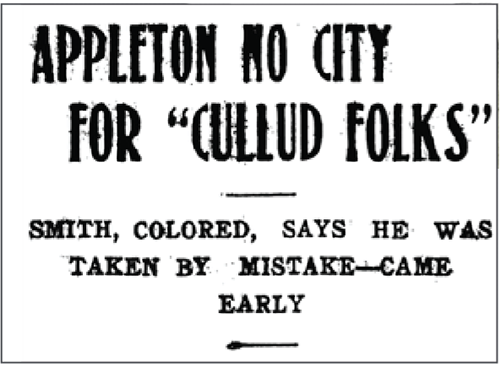 An excerpt from the Appleton Evening Crescent from May 17, 1915. Photo courtesy of Sabrina Robins

In other communities, the rules were common knowledge, with law enforcement, business owners and everyday citizens taking enforcement upon themselves.

Berrey noted that, in many instances, there was a rumor or accusation of some kind of crime committed by a person of color, often sexual assault, that led white residents to drive out that individual or the entire community of color in a town, like the Tulsa Race Massacre in 1921.

In certain situations, police arrested people of color. In others, they were beat up, or white citizens made threats to "leave this town or else," Berrey said.

"In reality, we have documented first-hand ... experiences dating back to the 1700s," Robins said on WPR's "Central Time."

Historical census data collected by Loewen and his colleagues shows the city had a population of 19 Black people in 1880, but by 1930 that number had dropped to zero.

Robins was struck by how many people said they didn't know Appleton was a sundown town and had no idea Black people lived there at earlier points in the city's history.

"We really lost the community memory of Black presence," she said.

Together, Robins and a team of researchers documented Black life in the Fox Valley after the period known as Reconstruction — which was itself controversial in Wisconsin — following the Civil War. They uncovered what Robins termed a "Black aristocracy" of successful business owners, social workers and educators who lived in the city at the time.

"We had a thriving community in the 1865s era," Robins said. "That memory is not included in the Appleton history at all, and so now we have a way to include more voices and have a more inclusive view of 'What is Appleton, who lived here, and what was life like?'"

Expanding what a sundown town is

Sundown town ordinances peaked in the 1970s in part because of the impact of the Civil Rights Movement, Berrey said. That coupled with legal changes like the federal Fair Housing Act made it harder for more explicitly racist policies to continue. But, Berrey noted there are still places in the U.S. that actively exclude certain groups of people to this day through less formal methods.

In an email, Berrey explained this:

The evidence we have shows that in the present, some places remain sundown towns through reputation (people hear that they should avoid), through local policing efforts (such as pulling over someone who looks like they 'don’t belong' in the town), and through zoning, such as restricting a neighborhood to single-family units, restricting mobile homes, etc. (this last effort has strong class implications). Real estate agents can also play a role by steering a client away from a particular neighborhood.

Robins emphasized those points, and argued there's a need to broaden what's considered a sundown town to include the way people of color are policed, treated as suspicious and made to not feel welcome in communities today.

"While we have seen some progress, we have current-day practices going on," Robins said. "Driving while Black. Sleeping while Black ... you have members of white communities ... confronting Black teens and others (asking) 'Why are you here?' and 'Give me your driver's license.'"

Reckoning with why Black people aren't comfortable in certain towns and cities across the state is crucial, Robins said, because these practices continue to harm the health, education and economic outcomes of Black Wisconsinites.

And, she said, making the state's history of racial exclusion more widely known is part of that. If not, according to Robins, "we repeat the same mistakes."

This story was inspired by a question shared with WHYsconsin. Submit your question at wpr.org/WHYsconsin and we might answer it.

The history of 'sundown towns' in Wisconsin 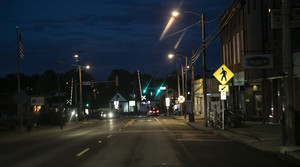 When people think about the history of racism in the U.S. they often think of slavery and segregation in the South. Less attention is paid to the racism that existed in places like the Midwest that often took different forms, including what were called "sundown towns." Two historians answer a...