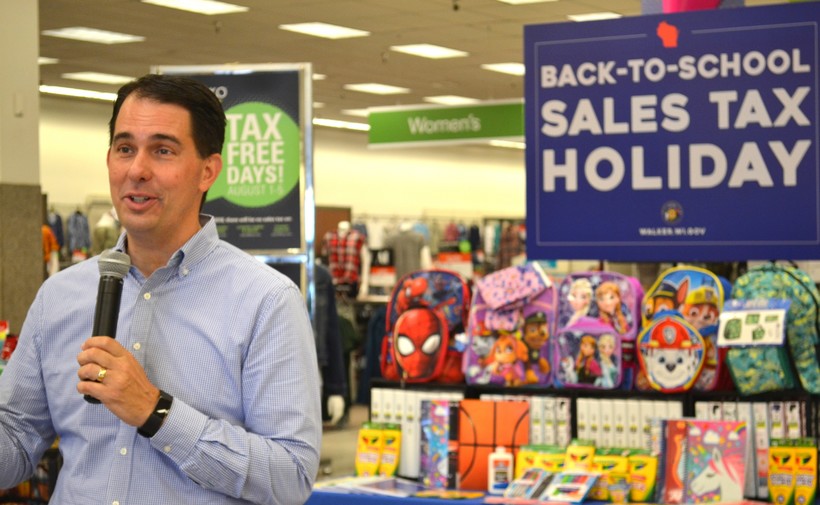 Walker pushed the sales tax holiday at visits to retail stores across the state, including Shopko in the Wausau area city of Rothschild.

"The National Retail Association estimates that a typical family with kids in school spends over $680 for the whole family on back-to-school clothing, supplies, and all of the other things that are a part of that. This would be a really big deal in terms of not having to pay sales tax on that amount," Walker said.

The sales tax holiday comes on top of a recent $100-per-child tax rebate for eligible families.

Walker pushed back against critics who called the two programs election-year gimmicks designed to buy votes.

"If I say the sky is blue, they'll say it's red," Walker said. "If this was about elections, we'd do it the week before the election. Instead, this is about back-to-school, and the real reason is because years ago they didn't do it, because they didn't have surpluses the way we've had surpluses."

Walker credited this year’s larger-than-expected surplus to his budget policies.

"We had a larger than expected surplus because of a growing economy and good fiscal reforms, and so we're giving this right back to the hard-working taxpayers of the state," Walker said.

The governor said the economy would help him win reelection despite a recent NBC News/Marist poll that showed him trailing Democratic Party front-runner Tony Evers by 13 percent.

"The only poll that matters is on election day," Walker said. "Unemployment has been below 3 percent five months in a row, and that's the first time that's ever happened in our state’s history, so I think in the end voters will have a clear choice."

The sales tax holiday is estimated to cost Wisconsin $14.8 million.