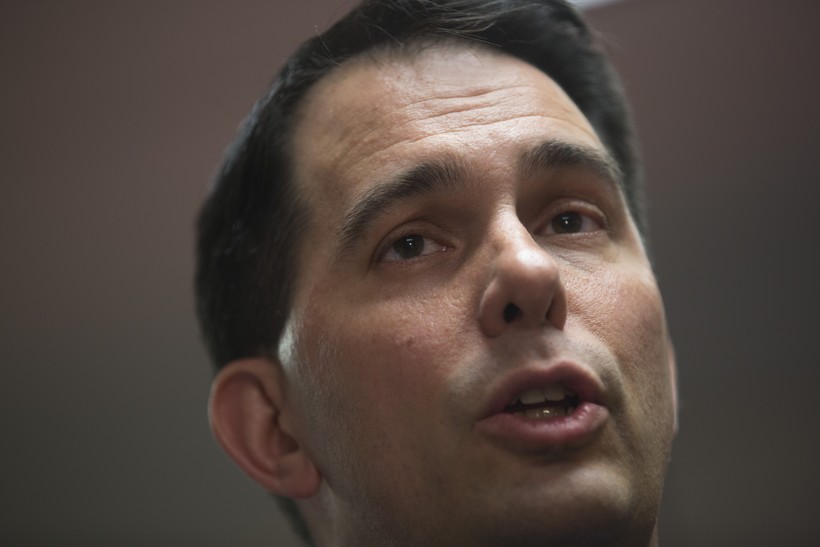 Wisconsin Gov. Scott Walker has signed the $76 billion state budget into law nearly three months after it was due.

Walker on Thursday signed the two-year spending plan at Tullar Elementary School in Neenah surrounded by students, teachers, Republican lawmakers and others.

The budget increases state aid for K-12 schools but also expands the private school voucher program. It freezes tuition at University of Wisconsin campuses and increases funding for higher education, but does not make up for cuts in the last budget.

The budget also increases fees on hybrid and electric vehicles but does not include a long-term funding solution for roads.

It would slightly reduce property taxes on the typical home, but proposed income and sales tax cuts were rejected by the Legislature.

"This is a solid, sound budget," Walker said at the signing. "It allows us to protect public safety and public health, while still protecting the local taxpayer. It invests big-time into student success for all of you. It invests in all of our citizens for being more digitally connected here and across the state. It invests in our roads and our bridges."

Ann Cattau, a retired teacher and school counselor, was among a small group of protesters outside the school. She said she feels expanding voucher schools will drain public education.

"If people choose to go elsewhere for religious education, which I did as a kid, that’s on their dime," Cattau said. "I do believe the vouchers are good for kids who may need to go to a different school for various reasons, but we need more money in the public education system."

"I actually believe we should end the school voucher program. That program's 26 years old. It has never delivered the promised results. It's never provided the increase in student achievement, or the school improvement that was promised," McCabe said.

On Wednesday, Walker made public 99 items he was striking from the two-year spending plan. He is now expected to hit the road to tout the positives in the budget, including the $639 million increase in funding for K-12 schools, tuition freeze and a small property tax cut.

Walker's numerous Democratic opponents are also zeroing in on aspects of the plan they will use to attack him over the next year of the campaign.

State Superintendent Tony Evers said the Republican-controlled Legislature should override a Walker budget veto that would take money away from about 200 mostly rural schools.

Evers, a Democrat running for governor, said Thursday that the Legislature should override Walker's veto of a budget provision that would have allowed low-spending districts to raise more from local property taxes without a vote. Tullar Elementary — where Walker signed the budget — is in a low-spending district.

The change was backed by Assembly Republicans who saw it as a way to fix an inequity in the current school funding formula. But Walker objected to the property tax increase.

State Rep. Gordon Hintz, D-Oshkosh, said Thursday at the signing that he was upset about Walker's move to not help low-spending districts.

"I think it’s telling about the priorities when the governor vetoes $90 million that would have gone to low-spending school districts like Green Bay and Oshkosh, but didn’t veto a tax cut for 47 millionaires," Hintz said, referring to the repeal of the Alternative Minimum Tax, which will benefit people earning up to $500,000 a year.

"Instead of using our resources to empower five million people in this state, we're showering tax breaks and state subsidies on just a few, with the hope that will trickle down to the rest of the population," Sachs said. "I think we've got to do a real about-face as to how we build a sturdy economy."

Republicans have never voted to override a Walker veto and leaders have not been calling for any action this year, either. Senate Majority Leader Scott Fitzgerald, R-Juneau, said there won’t be an attempt to override any of Walker’s vetoes.

"We’re not going to try and override Governor Walker on any of these vetoes. These are all items that were debated significantly in both caucuses," Fitzgerald said Thursday.

Walker signed the budget Thursday while Evers was giving his annual state of education speech. The governor signing the nearly three-month late state budget into law allows him to transition into re-election mode.