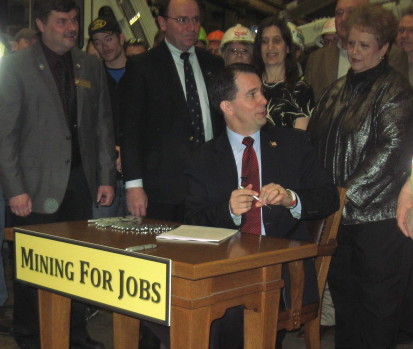 Governor Scott Walker has signed into law a controversial mining bill that could lead to a huge iron mine in Ashland and Iron counties south of Lake Superior.

Governor Walker chose two mining equipment companies for signing ceremonies - the Oldenburg Group in Rhinelander, and P&H Mining Equipment in Milwaukee - to emphasize his contention that the new law will create thousands of jobs beyond the several hundred needed to operate the mine. At the formal signing in Rhinelander, the Governor said the new law will be a boon to unemployed workers all across the state.

"This is going to be a job creator. It's a generational job creator. It's not going to all happen tomorrow. It's going to happen day after day, week after week, month after month and year after year....It sends a powerful message that Wisconsin indeed is open for business."

But the new law faces legal challenges, from environmental groups who say the mine would destroy the landscape of Wisconsin's Penokee Hills, and from the Bad River Band of Lake Superior Chippewa, whose reservation is downstream from the site. Roberta Retrum of Eagle River was part of a small group of demonstrators outside the factory grounds, "to protest the signing of this genocide bill. What they're planning on doing is destroying the watershed for the Bad River tribe."

"There are some people in this state, and I respect that, that just don't want any mines under any circumstances. What we did is put in place a process to streamline the overall process so that we can have safe and environmentally sound mining in the state of Wisconsin. "

The mining bill was passed on party line votes in the state legislature last week. No Democrats voted for it.