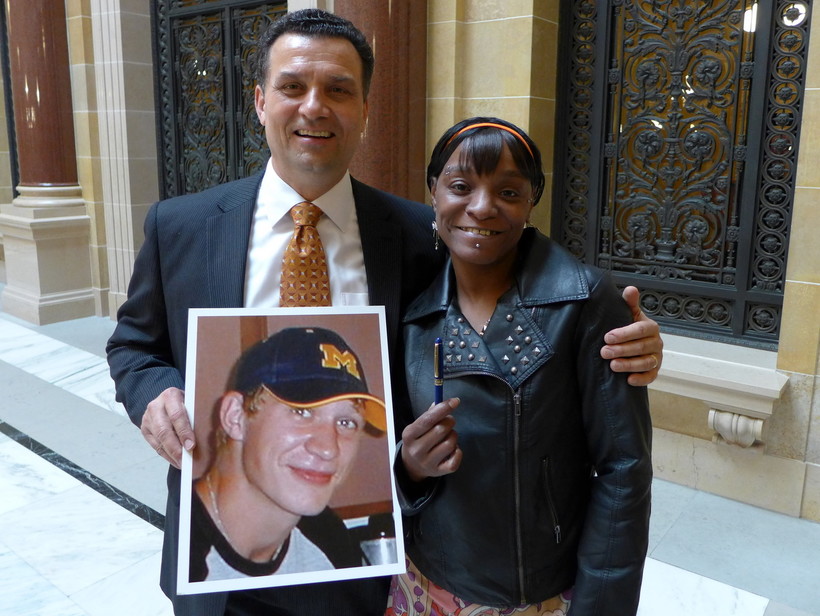 Michael Bell, Sr., left, and Sonya Moore, right, embracing after a bill was signed into law requiring outside investigations of deaths that occur in police custody. Photo: Shawn Johnson/WPR.

Families of people who died in police custody said they felt a sense of closure on Tuesday as Gov. Scott Walker signed a law requiring the use of independent investigators for police-involved deaths.

This law might never have happened were it not for Michael Bell, whose son was shot by police outside of their Kenosha home in 2004. Bell made it his cause when an internal investigation found no wrongdoing by police.

“I think if this bill was in place when my son was killed, I think we would have had a truthful and honest investigation and we would have been able to get honest answers,” said Bell.

Bell said that initially it was hard to get anywhere on this issue, as he met resistance from police unions and legislators. But when Bell filed a federal civil rights lawsuit over his son's death, things began to change.

“I think what gave us credibility is number one, we settled for just under $2 million from the federal civil rights lawsuit,” said Bell. “Number two, we took those funds and started using those funds to educate the public about what's going on. And we created some controversy.”

Bell spent some of the money recently on a billboard campaign in Milwaukee to highlight the death of Derek Williams, who died while handcuffed in the back of a squad car. Squad car video footage of his death has been made public, and was widely seen.

“They say he didn't resist arrest, they didn't put their hands on him,” said Sonya Moore, Williams’s mother. “But I watched him suffocate in the back of a police car.”

Moore says this law will make sure police aren't investigating their own friends.

“Everyone is coming in with a straight head,” said Moore. “Don't nobody know nothing until they hear both sides, ’cause there's not one side to a story, it’s two sides.”

The plan, which was sponsored in the Legislature by Reps. Chris Taylor, D-Madison, and Gary Bies, R-Sister Bay, would also require that the details of an investigation be publicly released if no charges are filed. It takes effect immediately.