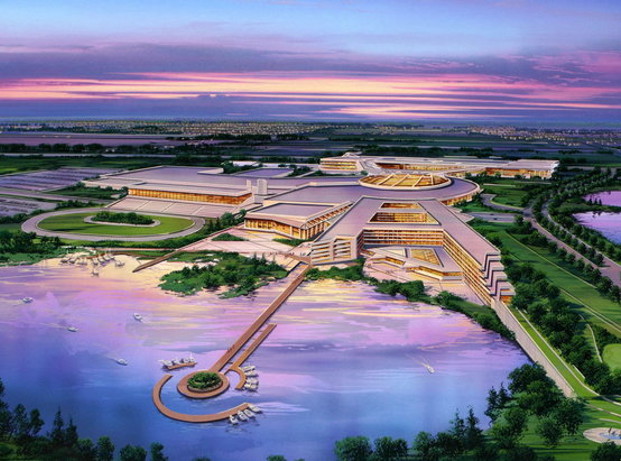 An illustration of the planned Kenosha casino.

Gov. Scott Walker rejected a Menominee Nation proposal to develop a casino at a former dog racing track in Kenosha on Friday.

Walker said his decision was based on the possibility that the state would lose part of its share of money generated by the Forest County Potawatomi casino in Milwaukee. He asserted that might have happened if the Kenosha casino had taken customers away from the Potawatomi.

“Because of the compacts that were put in place by Gov. Jim Doyle, we believe that the state taxpayers would be exposed to about $100 million or more in lost revenue, and millions more far beyond that,” said Walker.

Walker also blamed the Bureau of Indian Affairs for recently rejecting an amended agreement that would have clarified the state's responsibilities in the compact.

The governor announced his casino decision just a day before he speaks at the Iowa Freedom Summit in Des Moines, a major gathering of Iowa conservatives who will be considering potential presidential candidates for 2016. Walker said his presidential bid has nothing to do with the rejection of the Kenosha casino, despite general opposition to casinos among religious conservatives.

“If that was the case, I'd have shut it down right off the bat. If it had been done for political reasons, I would have done it a long time ago,” said Walker.

The Menominee Nation nevertheless said that Walker's run for president was behind the rejection of their proposal, in addition to Potawatomi opposition. It said its new compact with the state would have offset any revenue losses from the Milwaukee casino.

State Assembly Minority Leader Peter Barca, who was a supporter of the casino project, joined the tribe in saying that Walker’s decision may have had to do with politics. Barca noted that hundreds of Iowa conservatives have signed petitions or letters urging Walker not to expand gaming — “prominent people who played huge roles in past Iowa elections in the campaigns of other very conservative people like Rick Santorum,” he said.

At a Milwaukee news briefing on Friday, Walker was asked a second time about the timing of his casino decision and his Iowa trip.

“I don’t think you'll find anybody tomorrow talking about this,” said Walker. “What they're going to talk about is what I say tomorrow, and I'm not going to mention this at all.”

Walker said that in his speech for the Iowa event, he'll talk about how he took on powerful, big-government special interests in Wisconsin and how his message is new, fresh and from outside Washington, D.C.

“I don't understand the governor. They were talking $700 to 800 million dollars in investment, all the construction jobs people were waiting for, (and) hundreds if not thousands of jobs at the casino. This is all outside investment in the state of Wisconsin. I think it's worth a try,” he said.

Bosman said he's not convinced by Governor Walker's argument that the state would lose money in payments to the Potawatomi tribe. He said the economic benefits of a new casino outweigh concerns about legal challenges from other tribes.

Walker, however, said his policies have already created thousands of jobs in Kenosha by luring new companies to the area. He said the local economy is healthy and can do without the boost a casino might have provided. Moreover, he said the economic boost would have been offset by the cost to the state in lost revenue from the Potawatomi.

Assembly Speaker Robin Vos said he's disappointed in Walker’s decision, but he blamed former Gov. Jim Doyle for signing a compact with the Potawatomi that created a no-win situation. A former Doyle cabinet member, however, has asserted that nothing in the agreement from 10 years ago would have resulted in the state losing money.

The $800 million casino would have been managed by Hard Rock International, a gambling company that already operates a successful casino for the Seminole tribe in Florida.

Walker had until Feb. 19 to decide on the casino.