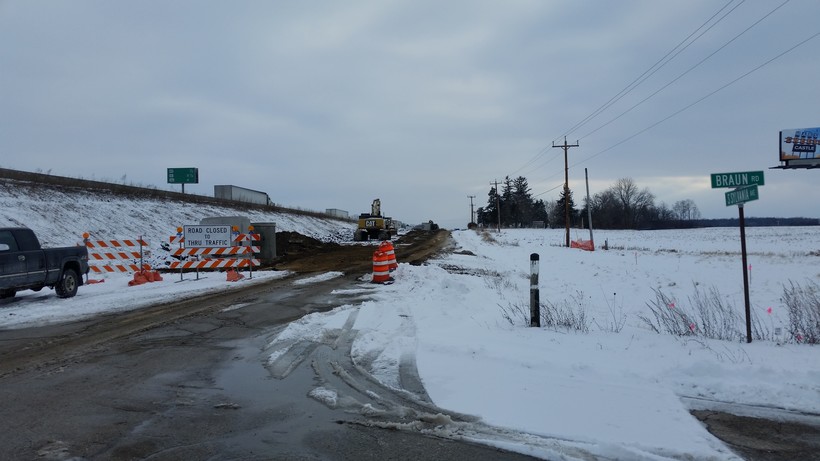 Preliminary work has started on an Interstate-94 frontage road near the planned Foxconn factory in Racine County. Chuck Quirmbach/WPR

Walker To Ask For Road Money While At White House

Monday Visit To Washington Expected To Include I-94 Discussion
By Chuck Quirmbach
Share:

Gov. Scott Walker travels to Washington D.C. Monday to meet with President Donald Trump. The two are expected to talk about federal money for highways and other infrastructure projects.

Walker expects Transportation Secretary Elaine Chao to also be at the meeting.

The governor says one topic will be his request for nearly $250 million to help expand Interstate-94 near the planned Foxconn factory in Racine County.

Walker told news reporters in Milwaukee Friday, "Well, we're going to work hard at it. I've talked with Sec. Chao about this. I've talked to (Presidential Assistant) Reed Cordish in the White House. Both of those have been pretty optimistic about where we're headed. Our timeline is we need to know by this spring, and so it's one more chance to make that case directly to the secretary on Monday."

Wisconsin has committed about $130 million for roads near Foxconn.

On Friday, the Democratic Party of Wisconsin tweeted that Walker will "hop over to DC where he'll be begging Trump to bail him out of his utter mismanagement of Wisconsin's infrastructure."

Busy few days ahead for Scott Walker. He'll be spending this weekend in Vegas begging billionaire Sheldon Adelson for money, then he'll hop over to DC where he'll be begging Trump to bail him out of his utter mismanagement of Wisconsin's infrastructure!https://t.co/kZcHNpzU45 https://t.co/wGJTEvgPyD

The Democrats' tweets charged that "While Walker advanced his own political career — Wisconsin roads became the 2nd worst in the nation."