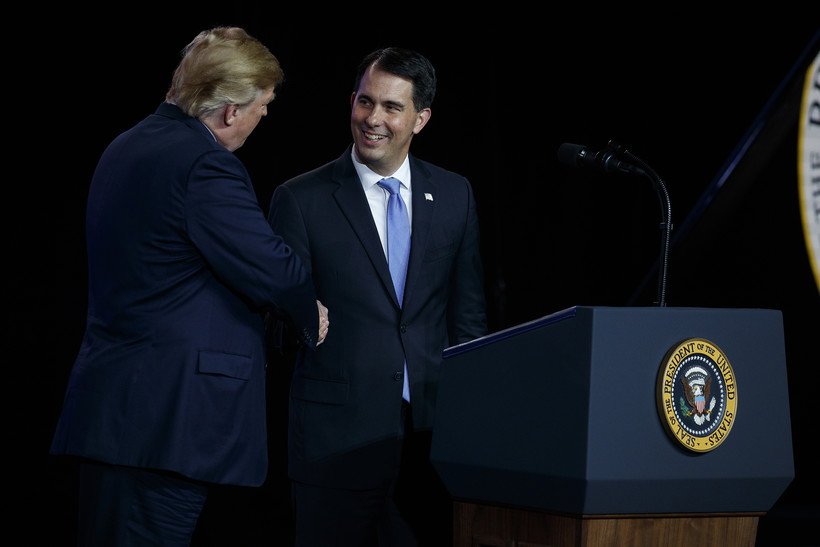 Walker Appears With Trump For Worker Event At White House

Gov. Scott Walker has attended a White House ceremony with President Donald Trump and members of his Cabinet focused on bolstering American workers including at the planned Foxconn Technology Group project in Wisconsin.

Walker was among many other elected officials and business leaders at the event Thursday.

After signing the order, Trump had business executives — including Taiwanese technology company Foxconn — put down on paper how many jobs they hoped to create and how many workers they would train.

Foxconn along with representatives from several other industries like trucking, hotels, retailers and building contractors all hope to fill what the Trump administration estimates are more than 6 million available jobs in the U.S. – many which don’t require a college degree.

But how many jobs fall under this "middle skill" category is in dispute.

The National Skills Coalition says up to a half of total U.S. employment requires some training beyond high school but less than a bachelor’s degree.

A UW researcher who worked for the Wisconsin Department of Workforce Development as a labor analyst says that’s an overestimate. His own research shows only 16 percent of relatively skilled jobs don’t require a bachelor’s degree.

"We need to be as accurate as possible because we are providing information for students and parents who are making decisions on what career to follow," said Matias Scaglione. He’s an associate researcher with Wisconsin Center for Education Research at the University of Wisconsin-Madison.

The middle skill positions he examined include a variety of jobs like mechanic, electrician, police, sheriff deputies, plumbers, paramedics and office administrative support.

"I think in society we have a stereotype of middle skill jobs, that they are mostly technical. Many people think about high tech manufacturing or new jobs in the health sector. We have those technical jobs, yes, like machinists, computer support specialists and industrial machine mechanics but we also have firefighters, sheriff and patrol officers," he said.

And wages vary greatly, Scaglione found in his research.

"Emergency medical technicians and paramedics make $15.71 an hour. That’s below the median hourly wage nationally. These people save lives," Scaglione said. "Then you have air traffic controllers who make $60 an hour. Getting one of these middle skilled jobs doesn’t mean you will have a high salary."

There are workers at all skill levels, he says, who have higher educational attainment than the job requires. But labor officials and business leaders like Jamie Dimon, chairman and CEO at JPMorgan Chase, lament that companies can’t find workers with the abilities needed to do a particular job.

"The main issue here is the idea of a 'skills gap' which is promoted by government officials from the federal administration and here in Wisconsin. It’s a big talking point, they say 'there are plenty of jobs, plenty of vacancies' and we’re not seeing that," said Scaglione.