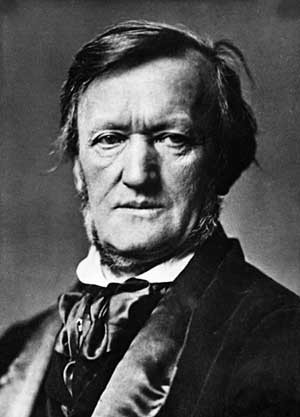 Wagner vs. the Londoners

It wasn't the best offer Richard Wagner had received--an invitation to conduct eight concerts for the London Philharmonic Society for a fee of 200 pounds.  But Wagner was attracted to the chance of conducting a large and excellent orchestra, and so in 1855 he came to London--and the center of a musical controversy.

Once he got to London, Wagner found out that the conductor of the orchestra, a Mr. Costa, had argued with the Philharmonic Society and refused to conduct their concerts.  Apparently Costa had been bluffing, though, and he was thoroughly disgusted when the society not only took him at his word but also hired Wagner to replace him for the season.

Costa did his best to alienate the orchestra from its guest conductor, and at the same time, a powerful critic with the London Times took a hostile attitude toward Wagner.  Then Wagner discovered that he was limited to one rehearsal for each concert.

At the first concert Wagner conducted Beethoven's Eroica Symphony, and members of the society were so impressed that they arranged for two rehearsals for the next concert and insisted that some of Wagner's own music be included on the program along with Beethoven's Choral Symphony.

For the chorus Wagner had to use an Italian Opera ensemble.  It included a baritone of whom Wagner later said, "his English phlegm and Italian training drove me to despair."  Nonetheless, the concert, in Wagner's words, "left nothing to be desired." Still, the critic for the Times pounced upon it with contempt. Wagner considered backing out of the contract, and tensions grew right up to the eighth and final concert.

Made cautious by the errant conductor Costa and the consistently hostile reviews, the orchestra had kept their distance from their guest conductor.  But at the end of the final concert they crowded around him and cheered as the audience pressed forward to shake the hand of Richard Wagner.

That's how Wagner describes his London experience in his autobiography, My Life.