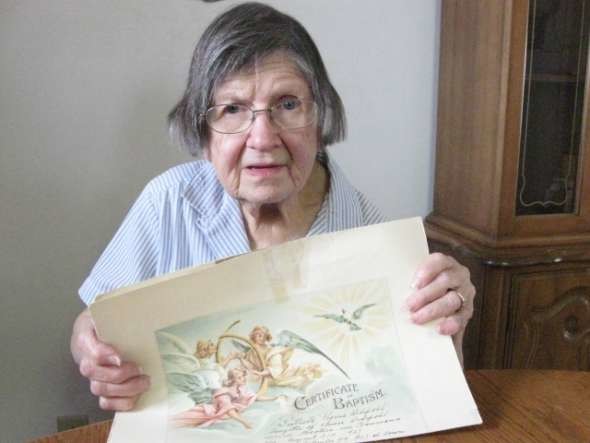 Ruthelle Frank holding her certificate of baptism, which is not sufficient to qualify for a photo ID under Wisconsin law.

The Village of Brokaw woman died June 4 at the age of 89, without seeing the resolution of the civil rights case that bears her name.

In 2011, Frank became the lead plaintiff in the case, which was filed by the ACLU.

Frank was a village alderwoman who couldn’t vote in her own election because she didn’t have an ID or the birth certificate she needed to obtain one.

"Well, that was just a slap in the face," Frank said at the time. "They wouldn't even look at my other papers. I had everything. I had my social security card. I had my marriage license. I had proof where I lived, and I had all the other requirements. The only thing I didn't have was a birth certificate. I don't feel that I should have to have a birth certificate to be able to vote."

Her son, Randy Frank, said she refused to accept a state ID unless the law was changed for everyone.

"She passed away before she was able to obtain a state ID without getting any special consideration and that was important to her," he said. "She was offered the ability to get an ID, but she did not want to do that and receive special treatment."

Her daughter, Rochelle Frank, remembers her mother as a fighter.

"She believed in fighting for her rights, and working hard in everything that she did, no matter if it was for voting, or to save the Village," Rochelle Frank said.

Ruthelle Frank was also involved in the struggle to keep Brokaw from dissolving because of millions of dollars of debt created when the Wausau Paper mill closed.

The Appellate Court still has to decide whether people who have difficulty obtaining identification can vote by affidavit.