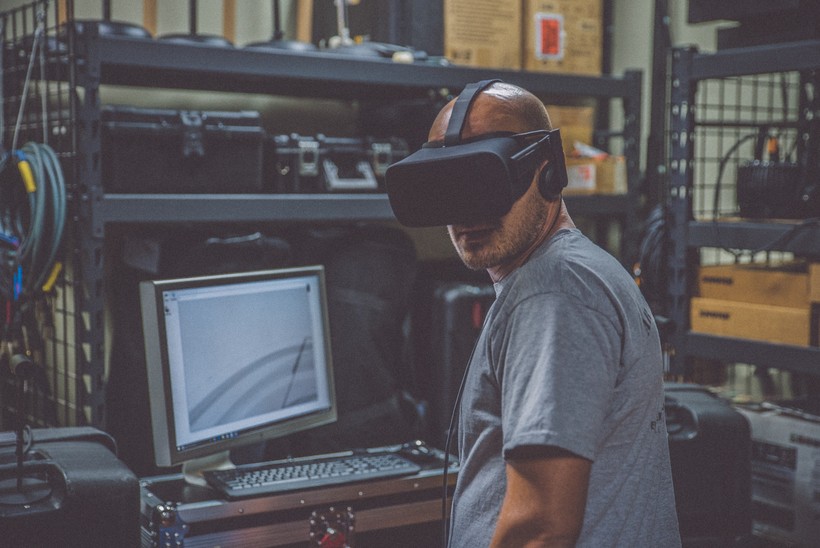 Photo by Eddie Kopp on Unsplash

Virtual Reality Is About To Get Very Real

There are a lot of stories about virtual reality in the media landscape these days. (Come to think of it, this is yet another one.)

VR may sound like something out of a Philip K. Dick novel but virtual reality is on the verge of becoming actual reality. That's the argument award-winning journalist David Ewalt makes in his book, "Defying Reality: The Inside Story of the Virtual Reality Revolution."

"I think there's a lot of skepticism about it because this is a business and a technology that's crashed and burned so many times in recent decades," Ewalt told WPR's "BETA." "But the technology's here now and it's really convincing. Unfortunately, it's kind of one of those 'you have to see it to believe it' things. But people who've tried the real cutting-edge hardware and who do it, like myself, it's really hard to deny that it's compelling and that it's real and that it's happening."

Ewalt says the experience that convinced him that VR was the real deal was a demo of one of the prototypes of the Oculus RIft, which was released in a consumer version a few years ago.

Before it was released, he did a demo of it in a hotel conference room at a tech convention. He was very skeptical about the technology because earlier ones had made him sick.

"I put on that headset and really found myself transported to a different place," Ewalt said. "And that's when I realized that even if the technology isn't perfect yet, it's very convincing to certain parts of your brain. It's just good enough at this point to really make you lose yourself in it."

Ewalt has come to the conclusion that VR works because it speaks to a lizard part of our brains.

"We can understand on a very conscious level, 'Oh, I've got this plastic thing on my head. These graphics aren't perfect, I know they're computer-generated.' You can understand on that level this is all fake. But the lizard parts of your brain just knows, 'Oh, I looked around. I saw this terrain, I saw these people.' That's what's happening. The lizard parts of your brain are not hard to fool and the technology's now good enough that you can fool that part of your brain and then you really just forget. It becomes where you are," he said.

Although VR may seem like a fairly recent technology, Ewalt likes to think that you can trace the history of virtual reality back to around 17,000 years ago and the Lascaux cave paintings in southwestern France.

"You don't realize until you're there or if you visit it in a virtual reality simulation but the caves are meant to wrap around you. So that when you stand in the center of one of these caverns, there are animals all around you. And as you turn and look around the cavern, they seem to run around you. It's like you're in the middle of a hunt and you're surrounded by all these creatures. And that is probably what the intention was of these people in decorating these caves this way," Ewalt explained. "They weren't just random drawings. They were trying to simulate an environment and draw people into this other world and say 'Oh, this is what it looks like to be on the hunt.'"

Ewalt says there's a good argument to make that everything from theater to stereoscopy to 3D images and 3D movies are all part of the millennial-long march of people to make better and better simulations that put themselves in another world.

In 1967, a second lieutenant at Wright-Patterson Air Force Base in Green County, Ohio named Thomas A. Furness embarked on a project that earned him the nickname, "The Grandfather of Virtual Reality."

"He started developing immersive technologies to improve battlefield experiences, which is a fancy way of saying fighter pilots would get into their planes and were just overrun with dials and gauges. And there was just way too much information. They couldn't handle it all. So Furness said 'Well, let's set out to find a way to create a better display, a better cockpit, a better interface for people to get information," Ewalt said.

Furness' solution to information overload was to create helmet-mounted displays that superimposed computer graphics on to what the pilot was actually seeing. In the 1970s, Furness took the next step and created an entirely virtual cockpit.

Although virtual reality will revolutionize the way we live, Ewalt says it also has the potential to become addictive and cause us to spend so much time interacting with VR that we lose our connections to actual reality.

"I think there's absolutely a danger of getting lost in virtual reality," Ewalt said. "But I think there's danger of people getting lost in television and in books and in video games. There are plenty of people who just stay home and watch Netflix all day at the expense of their personal relationships. VR makes that a little bit more dangerous because VR is so engrossing, in a lot of ways it can really replace real relationships or real experiences. But I think like any technology, it's about striking a balance."

Ewalt continued, "The benefits of virtual reality I think are going to be stronger than the problems with it. Some people will get lost. But the number of people who find new things and who expand their lives is going to be greater."