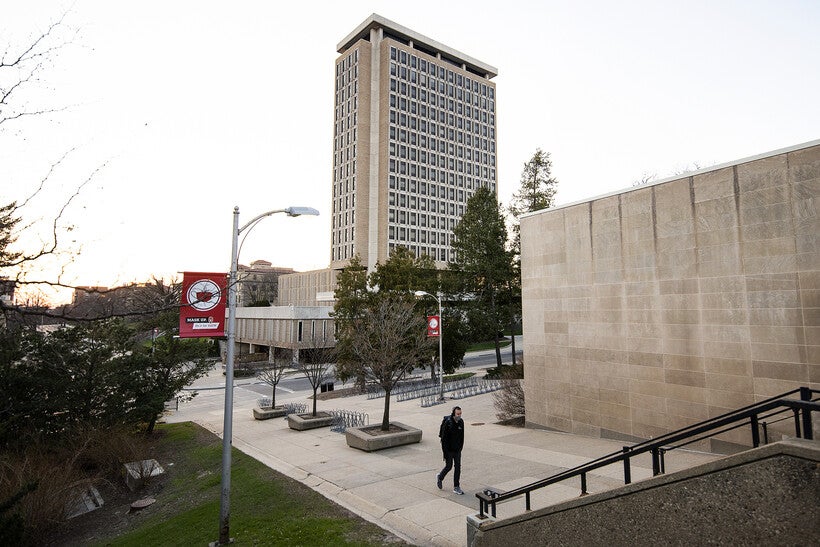 UW System to survey all students about campus free speech

The University of Wisconsin System will survey students over the next month about whether they feel campuses support freedom of speech and freedom of expression. The survey is being funded by a donation to UW-Stout's Menard Center for the Study of Institutions and Innovations.

The survey is a joint effort by UW-Stout's Menard Center in Menomonie and the Wisconsin Institute for Public Policy and Service in Wausau. It comes amid a state and national debate over whether viewpoints of conservative students and campus speakers are being silenced at colleges.

A copy of the survey provided to Wisconsin Public Radio includes questions about things like: their opinions on diversity; whether giving voice to unpopular or offensive viewpoints encourages healthy academic dialogue; and whether they have felt pressured by a professor to agree with a specific political or ideological opinion discussed in class.

The survey then pivots to the First Amendment and asks students to consider theoretical scenarios and whether the behaviors are protected by it. Those include situations like a fellow student distributing pro-Nazi leaflets near the university, a professor criticizing elected officials on Twitter or a group of students telling others they aren't welcome on campus because of their ethnicity.

Finally, students are asked what campus they attend, how old they are, what their racial or ethnic background is, what their sexual orientation is and what political ideology they identify with.

Tim Shiell is a professor of philosophy at UW-Stout and director of the Menard Center for the Study of Institutions and Innovation who helped design the free speech survey. He told WPR he's been interested in collecting this data for several years. After a donation made through the Menard Center, Shiell said former UW System interim President Tommy Thompson got on board and was supportive of the effort.

"The motivation is legitimate academic research, so we have a more informed public debate and that policymakers have actual data to look at and not just their own biases or speculations or assumptions," Shiell said.

Shiell said getting actual data on attitudes about free speech on campus is vital and pointed to a November report from the national Bipartisan Policy Center that, among other things, recommends college and university officials survey students, staff and faculty "in ways that build trust and ultimately empower campus leadership to respond to the results in meaningful ways for the campus culture."

Republican lawmakers, including state Rep. Dave Murphy, R-Greenville, are also interested in what students will say in the system free speech survey. Murphy said the survey was set to go out but he heard that campus chancellors had objected. Murphy told WPR he and other lawmakers pushed back.

"After we complained about it, they backtracked again," said Murphy, who also chairs the Assembly Committee on Colleges and Universities. "Then, System took the blame, but I'm not absolutely sure it was them."

On Tuesday afternoon, a UW System spokesperson sent a copy of an email sent by Shiell on March 30 to current UW System interim President Michael Falbo complaining about the survey being canceled. Shiell's email sought written justification for the cancellation.

"This is not a fly-by-night operation," wrote Shiell. "The study is funded by a well-established academic center (MCSII) and being conducted by a highly reputable subunit of UWS (WIPPS)."

Representatives for the conservative Wisconsin Institute for Law and Liberty and the national Foundation for Individual Rights in Education were among more than a dozen individuals copied on the email.

Shiell's email also came with a statement from Falbo who said he had heard concerns about the survey from UW chancellors, which caused him to notify representatives of MCSII and WIPPS that the UW System would not be participating.

"When I received more information and feedback, most notably the attached email from Dr. Tim Shiell, the Director of the Menard Center, I felt more comfortable with the survey and its timing," said Falbo.

In an email sent to WPR on Tuesday afternoon, Eric Sandgren, a UW-Madison professor and member of the UW's Systemwide Shared Governance Representatives, said the survey represents "a violation, at least in spirit, of human protection regulations" because the survey hasn't been reviewed by a campus institutional review board that reviews research protocols.

"One reason to do so is to ensure that recipients are protected from inappropriate intrusions, and clearly this survey has upset many people," said Sandgren.

Eric Giordano, executive director of the Wisconsin Institute for Public Policy and Service, pushed back on Sandgren's comment and said study authors got an exemption from further review by UW-Stout's Institutional Review Board. He said researchers contacted review boards at other UW campuses with some stating they didn't think the survey constituted human subjects research. Giordano said boards at other universities approved the process after seeing the comments from UW-Stout's board.

"So really, the statement that we did not have this kind of protection, human protection, or was not subject to campus review is actually completely inaccurate," said Giordano.

The idea of surveying students about free speech is not new. In January, Murphy and other Republican state Assembly members introduced legislation that would require UW campuses and technical colleges to survey students annually about First Amendment rights, academic freedom and whether they think there is political bias at their school.

The bill also proposed allowing district attorneys or the Wisconsin attorney general to sue members of the UW Board of Regents or members of technical college district boards if a judge ruled against a school. That bill never got a vote in the full Assembly or Senate.