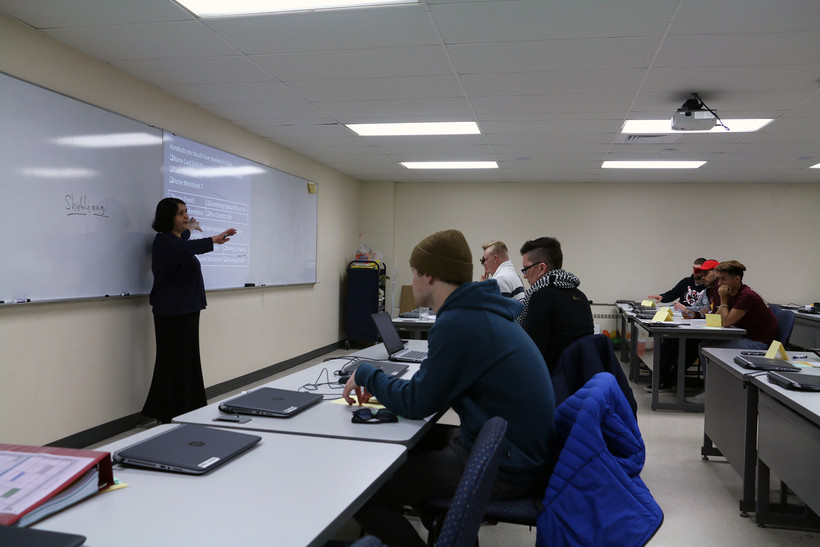 Mathematics professor Shubhangi Stalder addresses students in her corequisite entry level algebra class at UW-Milwaukee at Waukesha. The course combines remedial math and a college level course into one and promises to help students finish their basic math requirements in a single semester as opposed to spreading them across an entire year. Rich Kremer/WPR

For the past three years the University of Wisconsin System has been reforming the way its campuses teach entry-level mathematics. Starting with the premise that too many students are routed through remedial classes, the goal of the initiative is to stem the flow into remedial courses and get more students to pass general math requirements in their first year.

The latest UW System report on remedial education shows 5,504 freshmen were required to take remedial math classes in fall 2017, which works out to 19 percent of the incoming class. When broken down by race and ethnicity, students who were listed as African American, Hispanic or American Indian made up the highest percentages of those requiring remediation.

Remedial classes were first mandated by the UW Board of Regents in 1988 for students testing poorly in math and English on college placement exams. The requirement was aimed at helping students get up to speed in college, though the mandatory courses don't count toward graduation.

But over the past decade, research has emerged showing traditional remedial education could be hindering students on their college journeys.

With those concepts in mind, the UW System began a math initiative in 2017 with the goals of reducing the number of students requiring remedial math classes, increasing the number of students passing remedial and college-level math, and making it easier to transfer math credits between UW campuses. That work was boosted a year later by a $2.3 million grant from the Great Lakes Higher Education Corp., which has since been renamed Ascendium Education Group.

UW campuses have already begun implementing some strategies from the math initiative.

At the UW-Milwaukee at Waukesha campus, Shubhangi Stalder is teaching a new type of math class which combines remedial and college-level coursework into 90-minute class sessions. 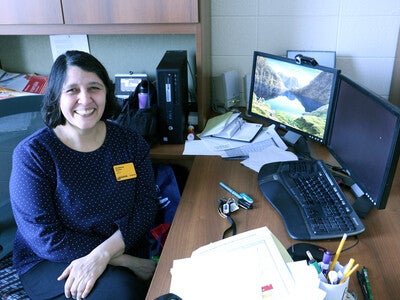 Shubhangi Stalder has been a math professor at Wisconsin’s two-year college campuses since 1993. Over the past decade she says the traditional methods of teaching remedial math to students who test poorly on college entrance exams leads many to forget what they’ve learned before they enroll into their first credit-bearing math class. Rich Kremer/WPR

"Anytime you don’t use mathematics you basically lose it," said Stalder. "So, if students take developmental math one semester, then either the three-week break or three-month break, they haven’t used it and now they’re back in intermediate algebra, and they forgot already what they did."

The two-in-one math or corequisite classes were first offered at the Waukesha campus last year and though some changes were made to course materials, Stalder said the new method shows promise.

"When you do corequisites, you’re doing prerequisite material and then right away you do whatever comes right after," Stalder said. "So, there is no way they forgot it."

Alice Pulvermacher is the project director of the UW System Math Initiative. She said early data from UW campuses show students are far more likely to pass their math requirements if remedial and general courses are taken together than if they’re spread over two semesters.

"So, when we look at the number of students that have passed those credit-bearing math courses," said Pulvermacher, "if they’re in the prerequisite pathway, 34 percent of them pass from the initial number enrolling compared to 82 percent for students that enroll in a corequisite path."

Pulvermacher said additional data from the initiative will be presented to the UW Board of Regents during their next meeting Thursday, Feb. 6 and Friday, Feb. 7.

Steven Ercole is a part-time student at UW-Milwaukee at Waukesha. He tested into remedial math, but he likes having the opportunity to take that and his first college-level math class at the same time.

"Essentially the combined class helps, so it gives me less credits but it knocks (out) the majority of what I want to do for my degree," Ercole said. "So, I’m trying to go for the business, advertising, marketing kind of ordeal, and this gives me the biggest bang for my buck."

But for Whisper McDonald, the experience was less positive. She took the Waukesha corequisite algebra class last semester, when it was first offered. She said the way the class was structured was confusing, and she didn't feel she got the support she needed.

"When I came in I was excited because it had been a while since I’d been in school, and I was like, 'I can do this. It will be no problem. I can work through it,'" McDonald said. "Leaving math now, I have a completely different opinion. I hated it. It was awful."

McDonald said she got a B in her remedial course along with a C+ in the college-level class. Since she wants to go into conservation, McDonald said she’ll have to take another class.

"Unfortunately, I have really low expectations for my next math class," said McDonald. "It's just that hope that I’ll pass it and not that I actually want to succeed and do well. It's just that I want to pass and get through it and be done."

Aside from corequisites, another push for the math initiative is expanding what are called alternative math pathways on campuses.

UW-Milwaukee mathematical sciences associate professor Kevin McLeod said the idea is to cater entry-level math classes to a student's major rather than sending them through the traditional default of college algebra.

"So, we never did have the philosophy here at Milwaukee that every student had to have an algebra course," said McLeod. "But it is part of the culture of the university. It is the default. If a student comes to the university and says they don’t know what major they want to take, the safe route is always to put them into algebra." 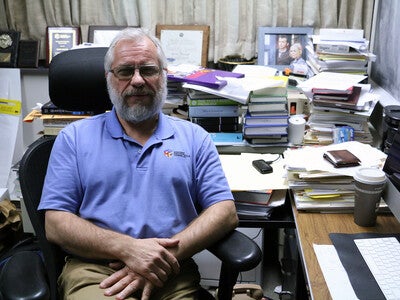 Kevin McLeod has been teaching mathematics at UW-Milwaukee for 32 years and says the campus has been working to place students into alternative math courses based on their majors as opposed to defaulting them into college algebra. Rich Kremer/WPR

Instead, he said the campus is working to place more students in quantitative reasoning classes, which teach statistical and data analysis along with mathematic reasoning skills as opposed to algebraic functions.

"They’ve been successful," McLeod said. "Certainly, the pass rates in those courses have been greater than the pass rates in our traditional algebra courses, and for students who do not need algebra for their majors, this is a very viable alternative."

McLeod said internal data suggest around 93 percent of students with declared majors are still taking college algebra, which means there is more work ahead on implementing the pathways approach.

For the rest of this year the UW System Math Initiative efforts will dive into early data collected at UW campuses to find out how different groups of students, like underrepresented minorities, are faring under the new teaching methods. Meanwhile, the UW System's Pulvermacher said individual colleges are working to expand the reformed course offerings around the state.