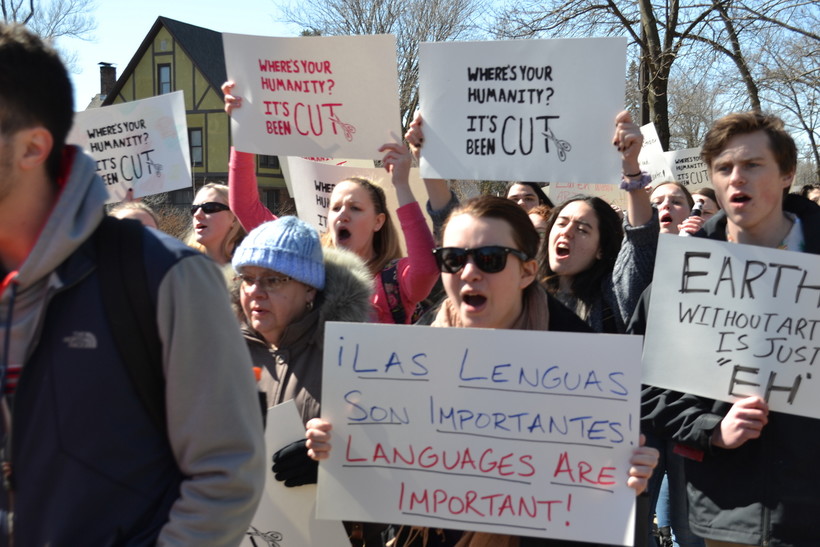 UW-Stevens Point students march to the chancellor's office to protest the planned elimination of 13 academic majors in the humanities.

University of Wisconsin-Stevens Point students held a sit-in in front of the chancellor's office on Wednesday to protest the planned elimination of academic majors in the humanities.

The cuts come as the school faces a $4.5 million structural deficit.

Chanting "hey, ho, ho, this proposal has got to go" and marching behind a large plastic banner that read "We want transparency," about 200 students filed into Old Main and filled the hallway on the third floor. There, they sat silently for 13 minutes to protest the 13 majors that are on the chopping block.

Mackenzie Madison, who is pursuing a BFA in art and a BA in art history, lamented the losses for the school’s nationally accredited art department.

Connor Schoelzel, who is double majoring in math and English, predicted that the cuts would hurt the school.

"I think it's going to affect the university in a big way, in terms of diversity, in terms of opportunities for people in central Wisconsin to get an affordable education in the humanities,” Schoelzel said.

Faculty members marched alongside the students.

Andy Felt, a professor of mathematical sciences, predicted that enrollment would be hurt if the proposal went through.

"I think it's already had an impact. I worry that we're going to have a hard time recruiting students. They know that an entire swath of majors will not be available," Felt said.

Jennifer Collins, a professor of political science, said the proposal "threatens the whole concept of the Wisconsin Idea, which started out as the idea that we should have comprehensive universities around the state."

"To shrink the mission of a university and to say that it really is just about getting people ready for the workplace is a huge mistake, and what's happening at UW-Stevens Point, I think, is like the canary in a coal mine. It's a sign that there's something toxic," McCabe said.

State Rep. Katrina Shankland, D-Stevens Point, in a fiery address to the protesters, called the cutbacks "a manufactured crisis" caused by the Republican-controlled state Legislature.

"What happens here at UW-Stevens Point will happen at other campuses if we let this proposal go through," Shankland said.

Chancellor Bernie Patterson praised the protesters who sat-in in front of his office.

The chancellor said the university would continue a commitment to the liberal arts even though it was planning to discontinue the 13 academic majors.

"We have to separate the issue of having a major in an area from providing a solid foundation in the liberal arts, and it's the latter that we will continue to do," Patterson said.

He said UWSP is facing a “perfect storm” caused by declining enrollment, 15 years of state budget cuts, and the state imposed tuition freeze.

Patterson said the proposal to eliminate the academic majors could be "modified," "changed" or "expanded," but "we have to do something. Doing nothing is not an option."