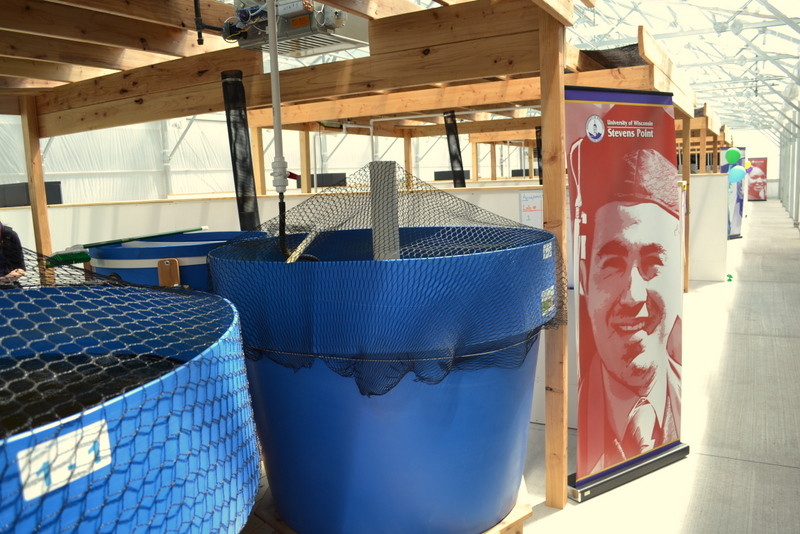 Researchers at University of Wisconsin-Stevens Point's new Aquaponics Innovation Center hope to create the world’s first commercially viable walleye farming operation. To reach that goal, the university is partnering with a private company in Montello.

At the grand opening for the Innovation Center, located on the property of aquaponics company Nelson and Pade, UW-Stevens Point Chancellor Bernie Patterson said the public-private partnership could help feed a hungry world.

Invoking Eleanor Roosevelt, Patterson said, "'The freedom of man, I contend, is the freedom to eat,'" adding, "It would be hard to overstate the importance of the work that's going on in this facility, in this state." Co-owners Rebecca Nelson and John Pade highlighted their company's 13,500-square-foot greenhouse that combines hydroponic gardening with aquaculture fish farming, growing crops with no chemical fertilizers and a fraction of the water.

"There are six different fish tanks," explained Nelson. "There are numerous filter tanks that break down the fish waste so just nutrient rich water goes out to the plants. The plants as they take out the nutrients are helping to clean the water for the fish, and that water then comes right back into the fish tank recirculating 24 hours a day."

"We can put together a system that can feed an entire village, both a protein crop and a vegetable crop," said Pade.

Added Nelson, "Greens and beans and peas and things like that. We’re providing a complete nutritional package that would be the ideal diet."

Nelson and Pade are raising tilapia, but that ideal diet could also soon include walleye, according to Chris Hartleb, director of both the Aquaponics Innovation Center and UWSP’s Northern Aquaculture Demonstration Facility in Bayfield.

"They refer to it as a white tablecloth fish because it's served at some of the fancier restaurants," Hartleb said. "Right now, walleye that you get at restaurants or supermarkets here is all imported from Canada, and there is no commercial production in the U.S."

Hartleb’s goal is to create the first commercially viable walleye farming operation in the world, combining research in Montello with a hybrid walleye his scientists created in Bayfield.

“It's just a mating of two natural Wisconsin fish, the walleye and the sauger. But it shows accelerated growth, and we've been able to get it from egg to market to table in nine months," he said.

That’s less than half the time it takes for walleye to mature in the wild. The lunch menu at the event included the hybrid walleye along with salmon raised in Bayfield, and tilapia raised in Montello. The salads and coleslaw were all grown in the greenhouse.  Nelson said they have local customers.

"The fish and lettuce, everything we grow in this greenhouse is sold within about a 20-mile radius: the Montello schools, Marquette County Services, restaurants and grocery stores," said Nelson.

Nelson and Pade is also selling its technology to private companies in Wisconsin, Canada and Texas.  But the celebration in Montello was bittersweet, according to Chris Hartleb, because the facility in Bayfield is threatened by Gov. Scott Walker’s proposed budget cuts.

"Our funding right now is slated to be eliminated and unfortunately, if that happens, the facility will have to close, because that's what keeps it open," Hartleb said.

But Bayfield’s Northern Aquaculture Demonstration Facility has its supporters in the state Legislature, including Sen. Janet Bewley, Democrat from Ashland.

"That center is producing amazing results.To tell the University of Wisconsin-Stevens Point to close it, is not only inappropriate, it's anti-business," said Bewley.

And the governor’s representative at the event, Tricia Braun of the Wisconsin Economic Development Corporation, had some encouraging words.

"Elevate Wisconsin's economy---we rely on our partners in both industry and academia to help realize this vision. And Nelson and Pade and UW-Stevens Point are great examples of this," Braun said.

"I don't believe when there is a need for something that it will be eliminated,“ he said.

The Legislature and Gov.Walker will have the final say on that.