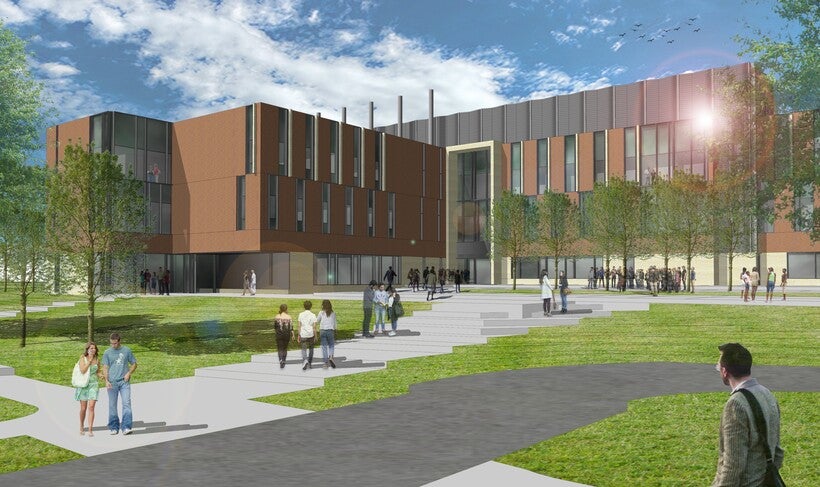 Project still needs approval of the Legislature's Building Commission, which rejected it in 2021
By Rich Kremer
Share:

The University of Wisconsin-River Falls expects to begin construction next year on a $117 million academic building aimed at addressing growing demand for science and technology-related degrees. Now, the project must get the approval of the state Building Commission, which rejected the proposal during the 2021 state budget process.

During its meeting on June 10, the University of Wisconsin System Board of Regents gave UW-River Falls the authority to construct a new Science and Technology Innovation Center project on the state's westernmost campus.

Known on campus as the SciTech building project, it features 73,865 square feet of classroom space for biology, chemistry, pre-engineering and health sciences programs and a first floor dedicated to collaborations with regional businesses.

UW-River Falls Chancellor Maria Gallo, who took the university's helm in 2021, said around 60 percent of all students on campus take a science, technology, engineering and mathematics — or STEM — course during their academic careers. UW-River Falls produces the third-highest percentage of STEM graduates in the UW System, Gallo said.

"That'll be good to have state-of-the-art facilities for teaching and learning, as well as laboratory spaces to do the same and also to conduct student research, which is really important," Gallo said. "That's one of those high impact practices that allow students to complete their degree and then go on and be very marketable out in the workforce."

Between 2011 and 2019, the U.S. Census Bureau estimates St. Croix County, next door to UW-River Falls, had the second-fastest population growth in Wisconsin, with 10.6 percent growth.

Employer demand for college graduates, particularly with STEM backgrounds, has been growing as well.

"So, local businesses seeing the demand that they have and that they project to have, need that workforce," Gallo said.

The building's $117 million price estimate was first approved by regents in 2020. Construction costs have risen since due to inflation, and Gallo said planners have made tweaks like foregoing an outdoor plaza to keep the finished project under budget.

Despite approval of the UW System regents, UW-River Falls' SciTech building project must get final approval from state Legislature's Building Commission in August.

Still, Gallo is optimistic. She said the project has strong support from Democratic and Republican legislators from the region.

"I'm confident that because we've met all the milestones up to this point, that we should be able to go forward," she said.