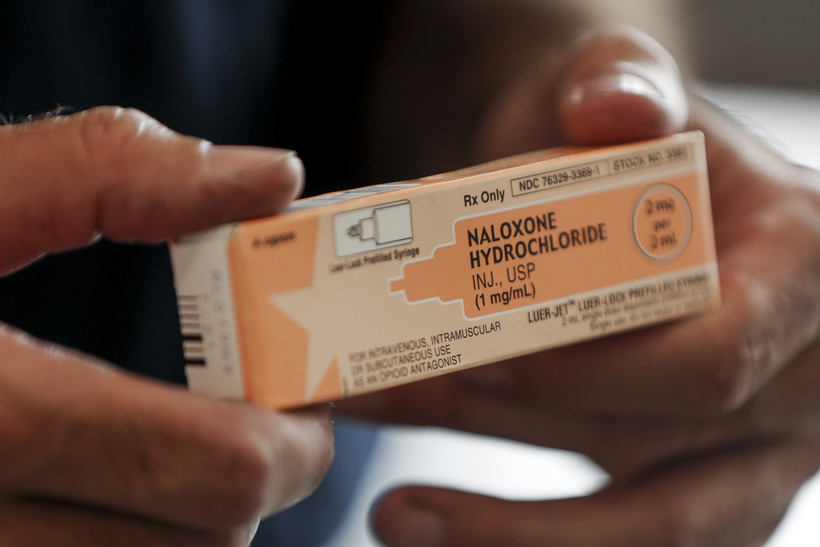 In this Wednesday, Sept. 11, 2019 photo, a fire medic holds a box containing naloxone hydrochloride which is carried in all their department's emergency response vehicles, in Akron, Ohio. Keith Srakocic/AP Photos

The University of Wisconsin-Oshkosh is the first state campus to install opioid overdose kits in residence halls and campus buildings. The "Nalox-Zone" boxes aim to make the lifesaving drug, Narcan, more accessible to campus and the greater Oshkosh community. Wisconsin Voices for Recovery has installed naloxone boxes across UW-Oshkosh's campus for people overdosing from opioids. Photo courtesy of the UW-Madison Department of Family Medicine and Community Health

UW-Oshkosh Chief of Police Kurt Leibold said the "Nalox-Zone" boxes look similar to automated external defibrillators, or AEDs, found in public buildings and some offices. He said the boxes — installed in campus residence halls, the student union and library — contain two doses of Narcan, a rescue breathing apparatus for CPR and instructions for how to reverse a suspected opioid overdose.

Leibold said UW-Oshkosh isn't having an issue with overdoses on campus, but law enforcement is starting to see drugs like fentanyl laced with other recreational drugs. Moreover, he said it's not a secret that opioid overdoses are on the rise in Winnebago County, the state and across the United States.

The Wisconsin Department of Health Services reported 1,226 opioid overdose deaths in 2020, a record for the state. DHS data shows 33 overdoses in Winnebago County in 2020. That's the most since at least 2014.

While Leibold said some people might say the campus is encouraging drug use by installing the kits, he said that's not the case.

"We're right in the middle of Oshkosh and we can't be naive to think that we're going to be insulated or immune to these types of events," said Leibold. "So, the idea is to just be prepared. That's why we have AED kits. That's why we have bleed kits, in case someone has severe bleeding. These are just ways to save lives."

The Nalox-Zone boxes at UW-Oshkosh were donated by Wisconsin Voices for Recovery, which is part of the UW-Madison Department of Family Medicine and Community Health.

Director Cindy Burzinski said the boxes were requested by UW-Oshkosh and the organization has deployed them in seven counties as well.

"There's definitely interest across campuses and across the community in general," said Burzinski.

The Nalox-Zone boxes are not just about responding to emergencies, she said, the medicine is also meant to be taken and used wherever needed in the community.

"And the thing that makes our boxes different is that we have an electronic monitoring system," said Burzinski. "So, we're able to track box access."

When a box is opened, said Burzinski, Wisconsin Voices for Recovery gets a notification. Staff reach out to the host location to see if the drug was used to reverse an overdose. The box is then refilled. Burzinski said there's also information about local resources for recovery-based organizations and nearby drug treatment centers.

Burzinski said the boxes have also been installed at other locations in Winnebago, Dane, Dodge, Wood, Milwaukee, Ozaukee and Sheboygan counties. She said kits outside the UW-Oshkosh campus have been used to reverse overdoses.

"We're doing a focus on harm reduction, which is a big part of it. However, safety is also a huge part of it, just creating a safer community," said Burzinski.