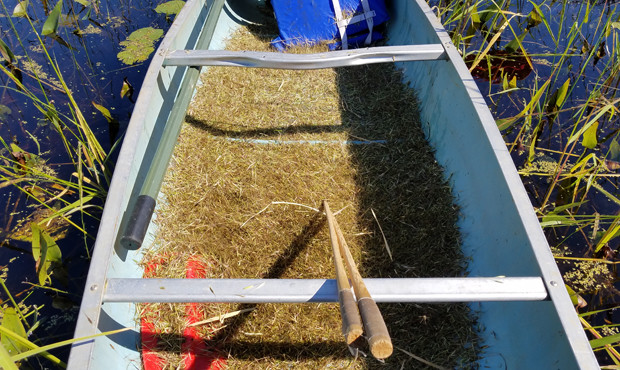 A canoe is filled with wild rice and the knockers used to harvest it after a ricing trip near the Lac du Flambeau Reservation. Photo courtesy of Sarah Dance

For many Native American tribes in the Great Lakes region, wild rice is a sacred gift.

But a 32 percent decline over the past century in the watersheds that breed wild rice across Wisconsin and Minnesota is impacting the cultural, economic and ecological outgrowths of the seed known to Native Americans as "manoomin."

Sarah Dance, a member of the Lumbee Tribe of North Carolina and a doctoral student at the University of Wisconsin-Madison studying environmental chemistry and technology, is looking at changing conditions that might be connected to the decline, with a particular interest in sulfide mining. 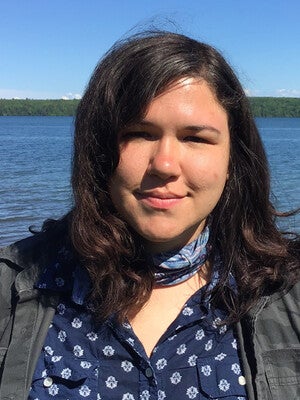 Dance said her hope is to identify recommendations to ease the threat to wild rice.

To conduct the experiment, she's growing wild rice in buckets with sediment and surface water from Allequash Lake in northern Wisconsin. Some of the buckets are controls, meaning their compositions won't be altered. In the test buckets, the conditions are consistent with water impacted by sulfide mining.

"I'm looking at the difference between how the rice survives and propagates in normal conditions and in conditions that are impacted by sulfide mining," she said.

Dance is unsure whether the data will be disseminated publicly, noting it may just be released to the tribes to help inform their work.

"It's very important that we have this multi-level effort to investigate the impacts with many different kinds of resources, many different diverse perspectives, and that includes from the tribes and research professors and graduate students," she said.

Armed with a desire to work with communities on environmental issues that are important to them, Dance set her sights on wild rice after learning about its impact in Wisconsin. She learned ways of connecting with the Native American communities through working as a student assistant with the Wisconsin Sea Grant.

"Through that I was able to build that skill set and then I went out and made some partners throughout the state where we could look at some of the conditions that they thought were impacting their wild rice in their local area," she said.

Conditions need to be right for wild rice to grow. Water that's too high or too low will kill the plant. Its vitality requires relatively low levels of sulfate in the overlying water and requires the right amount of nutrients without having to compete with other native or invasive plants.

Climate change is one of the major contributors to the decline of wild rice, Dance said. One of the reasons is because wild rice requires that the seeds be in frozen or near-frozen water.

"In a warming climate, it is struggling in southern Wisconsin," Dance said. Warming temperatures also contribute to increased storms and more invasive species that are out-competing the rice for nutrients. 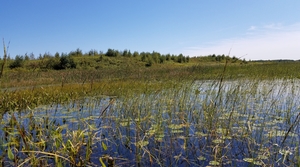 A new research project lead by a UW graduate student looks to bring together tribal and university researchers on the issue of wild rice protection and restoration. We hear from the student about the aims of the project, as well as the state of wild rice in Wisconsin.