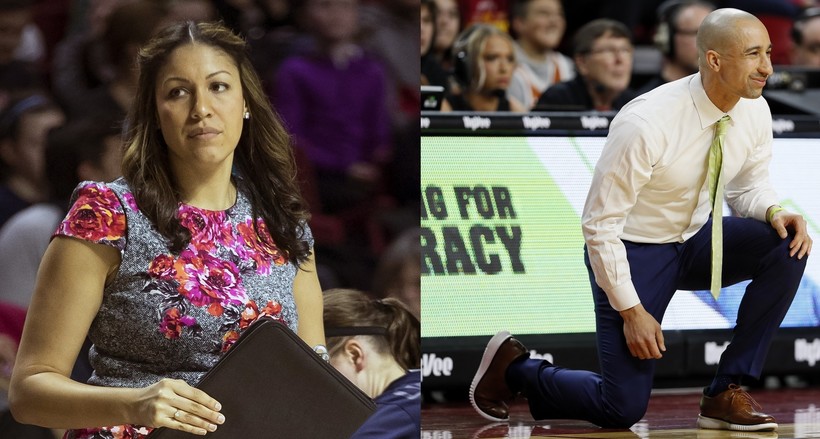 UW's Moseley Was Attracted To The Job Because Wisconsin Has Seen So Much Success In Other Sports
By Megan Hart
Share:

Both the University of Wisconsin-Madison and Marquette University are welcoming new basketball coaches.

Marisa Moseley, who will coach the UW-Madison women's team, and Shaka Smart, who will run Marquette's men's team, both spoke to the media Monday.

Moseley comes to Wisconsin from Boston University, where she played basketball as a student and changed the team’s trajectory as a coach. BU went 26-63 in the three years before her arrival as head coach. She leaves the team with a winning record.

Coming to Madison was an interesting proposition because Wisconsin has seen such success in sports other than women’s basketball, she said. The women’s ice hockey team won the national championship while Moseley was in talks with her new employer, she noted.

Moseley believes Wisconsin has all the tools to build a successful women’s basketball program, she said.

Before joining BU, she worked under Geno Auriemma for nine seasons at the University of Connecticut. During her time there, the Huskies won five national championships. At UConn she learned about the importance of working hard and building a strong culture, she said.

"Coach Auriemma had a phrase, 'We don’t do it until we get it right. We do it until we can’t get it wrong,'" Moseley said. "I think that’s something I really took away. We don’t just move on from something because the clock ran out."

At Wisconsin, Moseley becomes the second Black woman to coach in the Big Ten. C. Vivian Stringer has been at Rutgers since 1995, leading the Scarlet Nights to more than a dozen NCAA Tournaments.

Moseley is happy to be a role model for aspiring Black female coaches, she said. But she believes it’s important to emphasize that she’s earned the jobs she’s had, which include a tenure as an assistant at the University of Minnesota.

"I think that, in a role like this, I have an opportunity to show that (Black women) are capable of leading a Power Five program and that it can be successful and that other Black woman should get the opportunity to do that as well," Moseley said.

Just before Moseley discussed her future at Wisconsin, Smart was introduced at Marquette.

He was previously head coach at the University of Texas, which won the Big 12 tournament this year. During 12 seasons as a head coach there and at Virginia Commonwealth University, Smart led his teams to eight NCAA Tournament appearances, including the 2011 Final Four. Texas won the NIT in 2019.

Smart is originally from Madison. He was born in 1977 — the year Marquette won its national title. Head coach Al McGuire famously retired right after the game, and Smart remembers watching him as a commentator.

"Growing up in this part of the country, you couldn’t help but follow this basketball program," he said.

.@CoachShakaSmart acknowledges the impressive list of #mubb alumni, including the mentorship of @DocRivers. #WeAreMarquette pic.twitter.com/QEJGlpbCg3

Relationships are at the foundation of his coaching philosophy, Smart said. He thanked his former coach at Oregon High School in Dane County.

"I was raised by a single mom, and really my coaches in sports were the ones that filled the void of a father figure for me. I used to look at those guys like they were 10 feet tall," he said.

Smart arrived in Milwaukee on Sunday, and he’s looking forward to visiting his new players, he said.