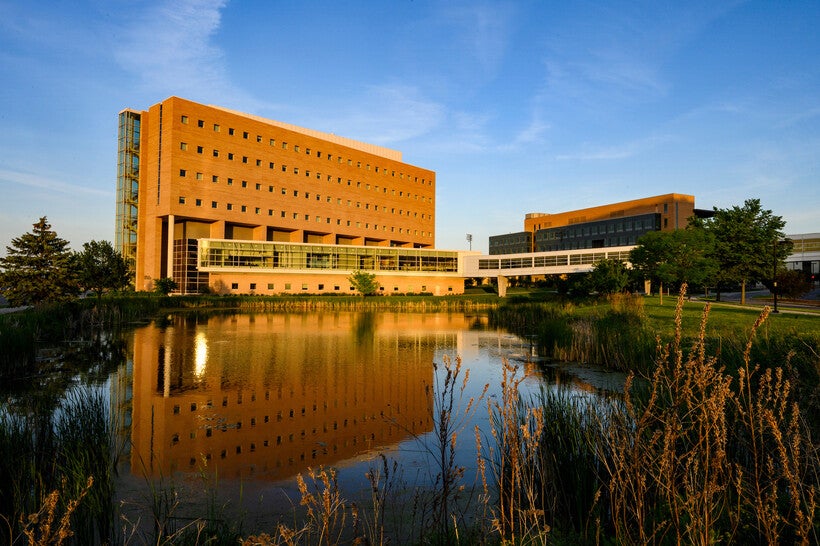 Rennebohm Hall is pictured at the University of Wisconsin-Madison on June 7, 2020. The building is home to the School of Pharmacy and will house the new Transdisciplinary Center for Research in Psychoactive Substances. Bryce Richter/UW-Madison

Researchers at the University of Wisconsin-Madison studying the use of psychedelic drugs to treat PTSD, substance abuse and depression are coordinating efforts through a new Transdisciplinary Center for Research in Psychoactive Substances.

Clinical studies on the therapeutic use of psilocybin, the active ingredient in psychedelic mushrooms, and MDMA, which is more commonly known as ecstasy, have been underway at UW-Madison since 2014.

UW-Madison School of Pharmacy professor Paul Hutson is the center's founding director. He told WPR the goal of the center is to build on ongoing pharmacological research into psychedelic compounds by bringing in perspectives from other fields.

"The other thing that we've got that I think is going to be making us a little bit more unique are individuals from the liberal arts that are going to be participating in the center's activities, looking at historical and cultural trends, and also at the impact of psychedelics or psychedelic tourism, for example, indigenous cultures," said Hutson.

He said research on campus has shown that MDMA in combination with psychotherapy can reduce symptoms of PTSD by as much as 300 percent in patients.

"The effects of adding MDMA to psychotherapy are truly dramatic," said Hutson. "And, we're hoping that this will, quite honestly, save lives because of the risk of suicide, self harm with PTSD patients."

Hutson said more research is needed, but such findings are likely to lead to an application with the U.S. Food and Drug Administration to approve MDMA as a treatment for the disorder.

"We know that MDMA tends to be a trust building drug, and in many respects it allows people to be a little bit more open and deal with the experience and involve themselves in the psychotherapy," said Hutson.

Studies conducted at other U.S. research universities, said Hutson, have shown MDMA can also be a very effective treatment for alcoholism, tobacco addiction and cocaine abuse.

"And they, too, are looking down the road at trying to get psilocybin approved by the FDA," said Hutson. "Because we're seeing, in the studies that have come before this, that a single dose of psilocybin appears to have the kind of effect on depression that one might expect from six months or more of traditional antidepressants."

Hutson said other UW-Madison studies are looking at using psilocybin to treat patients with opioid and methamphetamine use disorders.

Patients receiving doses of either psilocybin or MDMA are brought to a cozy room in UW-Madison's School of Pharmacy building. It's adorned with art, soft lighting a couch and two chairs. Test subjects are joined by two "guides," said Hutson, who ensure subjects are comfortable and safe during the eight-hour sessions. Hutson said the most common problem with psychedelics is people getting hurt by accident, which can happen when people are under the influence. 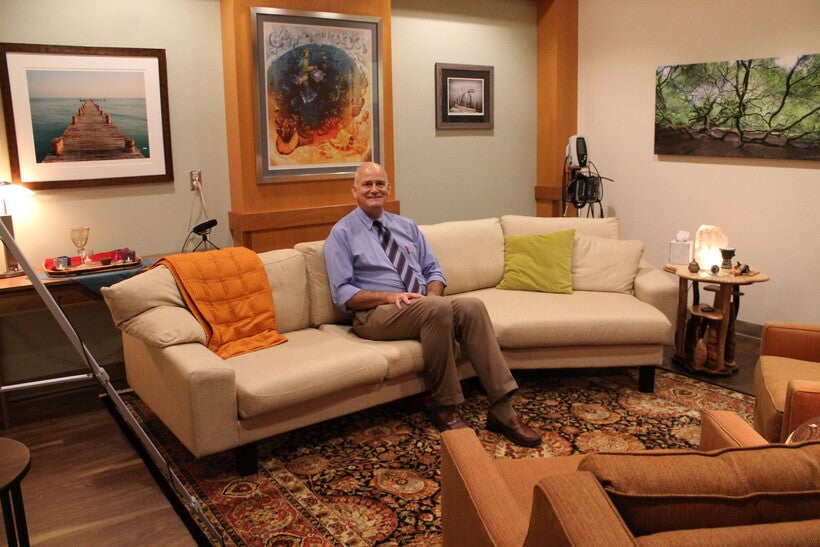 UW-Madison School of Pharmacy professor Paul Hutson sits in one of the rooms used when patients receive doses of either psilocybin or MDMA. The room is adorned with art, soft lighting a couch and two chairs. Test subjects are joined by two "guides," said Hutson, who ensure they're comfortable and safe during the eight-hour sessions. Photo courtesy of Paul Hutson

Another goal of UW-Madison's Transdisciplinary Center for Research in Psychoactive Substances is to improve the diversity of individuals participating in psychoactive drug treatment trails. Hutson said there's a lot of mistrust about medical research in a lot of communities in the wake of prior research, like the Tuskegee syphilis experiment involving Black men between 1932 and 1972.

Hutson said one of the greatest challenges in recruiting a more diverse group of volunteers for clinical research involving psychoactive treatments is their ability to take time away from work to participate.

"It's difficult also if they're single parents or if they don't have child care, if they're going to be gone for a full day getting their treatment, so we have to figure out how to make it more accessible," said Hutson.

Hutson said he and his colleagues are still working to find ways to make the research more inclusive.

In March, UW-Madison announced the creation of a new master’s degree program in Psychoactive Pharmaceutical Investigation. Cody Wenthur is an assistant professor in the university's School of Pharmacy and is directing the new program.

Wenthur said the goal is to develop leaders in pharmaceutical and biopharmaceutical industries seeing rapid growth in the study of psychoactive substances as treatment options for patients.

"These areas are expected to grow by leaps and bounds greater than 20 percent each year over the next decade," said Wenthur. "And we're hoping to take our proven expertise here at UW-Madison in this area and deliver that to students so that they can get a leg up in this industry."

Wenthur said the first cohort of students for the online program come from around the globe and start their studies Sept. 8.