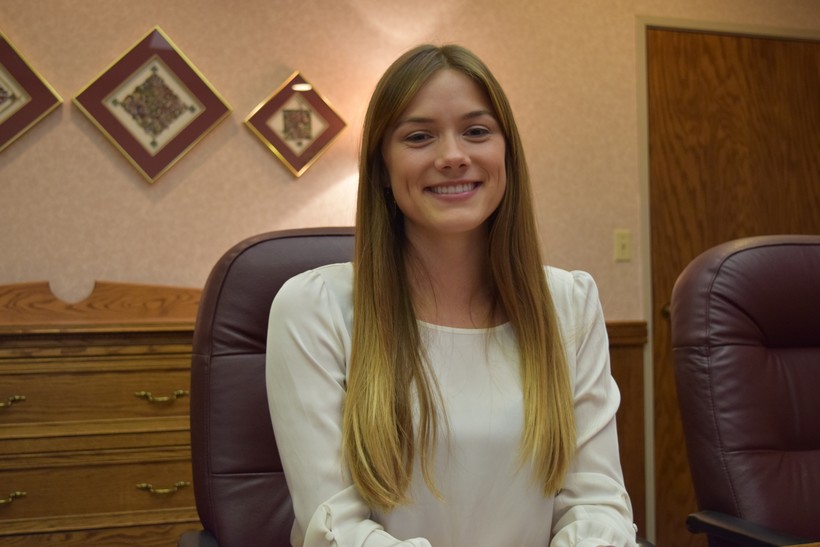 UW-La Crosse Student Caycee Bean said change is needed at the unveristy to make sure victims of sexual harassment are heard. Hope Kirwan/WPR

A University of Wisconsin-La Crosse student who accused a professor of sexual harassment is speaking out about his recent retirement.

Caycee Bean spoke to reporters in La Crosse on Thursday. The meeting comes two days after UW-La Crosse Chancellor Joe Gow announced former art department chair Joel Elgin was retiring instead of responding to a recently completed investigation into sexual harassment allegations made by Bean and several other people.

The investigation started after Bean made a public Facebook post about Elgin in September, claiming he sexually harassed her as a freshman and that UW-La Crosse officials didn't appropriately respond when she reported the incident in March.

At Thursday's press conference, Bean said she made the Facebook post after meeting with UW-La Crosse's director of human resources. She said she was frustrated by the lack of information the university gave her about the investigation.

"As I walked out of that meeting to my car, I crossed the street with Joel Elgin. I looked down the street and he was crossing the street at the same time that I was. And I was just so irate and furious that I got in my car and I just sat there until I had finished writing and I posted it," Bean said. "It came from a feeling of just feeling so betrayed and upset and just not heard that, no matter what even happened from that post, I just wanted absolutely everyone to know about this man. Because if UWL wasn't going to get rid of him, I just felt like I needed to tell the world because I knew what he was doing and I knew that I was not the only one."

Bean said she wasn't surprised when the university announced Elgin was leaving this week.

"It is kind of a let down in the fact that he still gets all of his benefits potentially," Bean said. "But ultimately, I’m satisfied that he’s not on a campus anymore and hopefully he never will be again."

She said she doesn't have plans at this time to press charges against Elgin.

In a statement on Wednesday, Elgin's attorney said he had planned to respond to the investigation’s findings until a university attorney "advised that Professor Elgin’s accumulated sick leave was at risk."

The attorney said the leave was worth thousands of dollars in health insurance premiums in retirement.

"Professor Elgin consistently received glowing reviews from his art students. Now, just one student, along with her minions, has 'canceled' Professor Elgin, his career and his reputation," said the statement from Elgin’s attorney.

His attorney said UW-La Crosse faculty should be afraid of students making "a bogus claim at anytime" and said the university "will cave to a persistent complainant and/or threaten to eliminate economic benefits."

UW-La Crosse has confirmed that other people came forward with information about Elgin’s conduct after Bean’s Facebook post.

Bean called Elgin’s response via his lawyer "ridiculous," and said the statement was meant to intimidate her and other victims.

"These girls aren’t my minions, like, I do not know these women," Bean said. "These are complete strangers who have just heard the word of this guy finally being caught and have a story to share."

Bean said 23 women have shared stories with her, including faculty and former students.

"There's been so many more than that who have come forward and said, 'You know what, I believe you. Like I've had this professor before, I’ve seen how he's acted in the classroom, this does not surprise me,'" Bean said.

In an email to UW-La Crosse staff and students on Tuesday, Gow said he hopes to release the findings of the investigation into Elgin and hold an open forum to answer questions.

"I found (the report) to be thorough and compelling enough to move the process of dismissing a faculty member to its next phase. I firmly believe the testimony of the individuals interviewed by the investigators and I thank them for their courage in coming forward to tell us about their experiences with Professor Elgin. On behalf of our university, I apologize to them for what they have been subject to," said Gow in the email.

Bean said she hopes the chancellor will also address why the university didn't do more when she initially reported the incident and failed to keep her informed about the process.

"My story the first time that I came forward with it to UWL was exactly the same as the second time. So that just shows that there’s something broken within the UWL system that needs to be changed and I don't know if it's the way that the system is working or if it's the people," Bean said.

She said support from students and the community has been overwhelming, and she encouraged other victims of harassment to come forward.