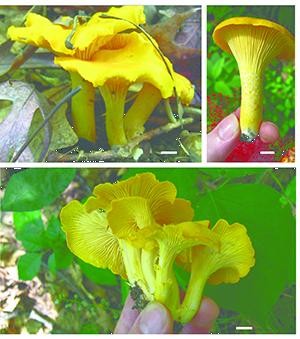 A University of Wisconsin-La Crosse (UWLC) professor and his team have found that a popular edible mushroom is not what people thought it was.

Chanterelles are some of the most sought-after mushrooms in the culinary world. They're bright orange and smell like apricots. UWLC biology professor and mycologist Tom Volk says foragers commonly find them in the La Crosse area, but people have been calling them by the wrong name.

Following a walk in La Crosse's Hixon Forest and months of research, Volk and graduate student Matt Foltz realized there were actually three unnamed chanterelle mushroom species growing in the forest. Each name reflects the unique colors of the chanterelle species.

Volk says there are 75,000 known fungi varieties in the world, but researchers predict there are actually 1.5 million. Up to 250 of those are edible and around 20 can kill people.

He says the world of fungi could use more research.

"We found these three species right in our backyard. People think that biodiversity is all in the tropics. Although there are a lot of new species there, there are certainly species right here that need to be looked at and worked on. We know most of the plants and we certainly know all of the mammals, probably about half of the insects, but fungi are very poorly known."

The chanterelle discovery results were published in the most recent edition of Mycologia, a mycology journal.