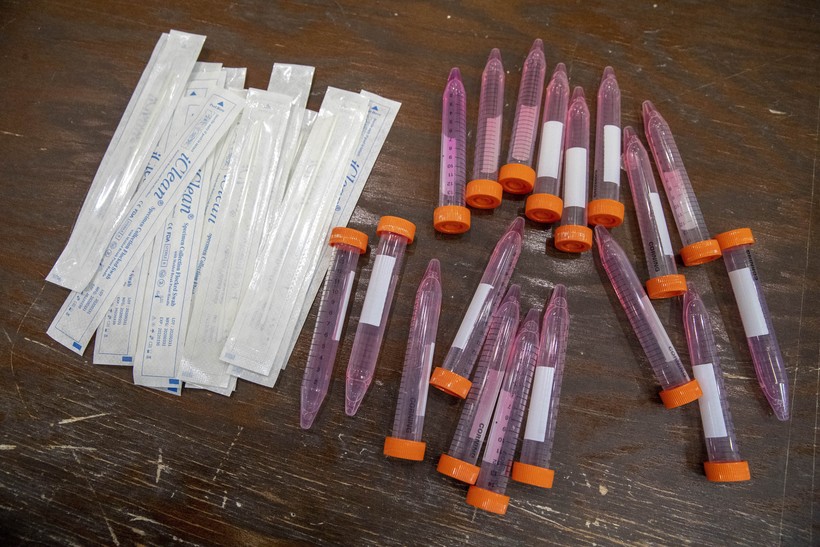 Test swabs and specimen tubes sit on a table at a COVID-19 testing site at the Abyssinian Baptist Church in the Harlem neighborhood of New York. Public health officials have said robust testing for the coronavirus is essential to safely lifting stay-at-home orders and business closures, but states are creating confusion in the way they are reporting the data. Mary Altaffer/AP

Antigen Testing Meant To Spot Outbreaks In Residence Halls, Keep Them From Spreading On And Off Campuses
By Rich Kremer
Share:

University of Wisconsin System campuses are still working to ramp up COVID-19 surveillance testing of students living in residence halls nearly two weeks after classes started at most state universities.

In August, UW System Interim-President Tommy Thompson announced that more than 350,000 tests would be ordered for all campuses except UW-Madison, which has its own COVID-19 testing program. The bulk of the order would be antigen tests, which detect proteins in the new coronavirus. The goal is for campuses to test students living in residence halls every two weeks in order to detect potential outbreaks and contain them.

"Our goal is to get to 400 tests a day, which would then allow us to get through the residence hall students every two weeks," said Thesing-Ritter. "So we are a few weeks away from being able to do that volume of testing, but we're making really good, slow and steady progress towards our goal."

Thesing-Ritter said in a perfect world, the surveillance testing would have started the first week of classes. But getting the first round of 516 antigen tests processed last week in light of a "short notice" about the UW System antigen testing plan is a good start, she said.

"I think given that we'd had a two-week notice getting a testing site up and running in two weeks and being ready to get our students tested as quickly as we were able to as a pretty tremendous task for our campus," said Thesing-Ritter.

On Sept. 6, UW-Eau Claire announced six residence hall wings would be quarantined for two weeks after 17 dorm residents tested positive for COVID-19. Campus residence life director Quincy Chapman told WPR the decision to quarantine the halls came from the Eau Claire City-County Health Department in consultation with the university. Five days later, the campus announced the quarantine had been lifted after a "comprehensive review of residence life policies" and "further investigation" of students who tested positive.

According to data from the Wisconsin Department of Health Services, Eau Claire County's number of reported cases of COVID-19 has increased by more than 23 percent since classes started, with daily reports rising significantly since students began moving into dorms in late August.

The University of Wisconsin-Milwaukee, which began classes Sept. 2, will begin its antigen testing of its nearly 2,000 dorm residents this week.

The campus testing dashboard showed 41 positive cases last week. But the data doesn't include the total number of tests or whether those testing positive were students or employees.

A daily report from UW System with test data from all campuses showed UW-Milwaukee conducted 57 tests on Thursday with 12 coming back positive for a positivity rate of 21 percent.

The UW data doesn't show a breakdown of what types of tests were used, and the overall data is reported differently than some campus dashboards.

On Friday, UW-Platteville spokesperson Paul Erickson said his campus is also working to ramp up surveillance testing of 3,000 students living in residence halls. In the meantime, Erickson noted, the majority of the campus test results have come from students who are showing symptoms of COVID-19 or those identified by contact tracers as having had contact with someone who tested positive.

Data on the campus's testing dashboard showed a total of 78 tests reported on Friday, with 14 positives among them. That works out to a nearly 18 percent positive rate.

The DHS has shown spikes in daily reported cases of COVID-19 in Grant County since students returned to campus. The total number of county cases has increased by 18.5 percent since classes started.

Antigen testing for UW-Whitewater's more than 3,900 dorm residents began last week, according to a campus spokesperson.

On Thursday, UW System data showed only 36 total tests had been conducted on the campus, with 18 coming back positive for a daily positive rate of 50 percent. According to the campus's own testing dashboard, there were 116 positives reported between Sept. 6 and Sept. 12. All told, UW-Whitewater has reported 96 positive cases out of 518 tests between Aug. 29 and Sept. 10, which works out to a 19 percent positive rate.

During a Sept. 9 Whitewater City Council meeting, interim-chancellor Greg Cook asked the board to pass ordinances limiting indoor gatherings to 10 people and capping outdoor gatherings at 25. Cook said UW-Whitewater was "not far behind" UW-Madison, which announced that all classes were moving online for two weeks due to major spikes in the number of positive cases.

Some campuses, including UW-Green Bay, UW-Parkside, UW-River Falls, UW-Stout and UW-Superior have posted relatively small numbers of positive cases via university or UW System dashboards, though total test numbers have also been small compared to other campuses.

UW-Stout started antigen testing this week. Classes began last Wednesday. The campus testing dashboard shows a total of 86 tests between Sept. 8 and Sept. 11, including 18 positives. That works out to a total positive rate of nearly 21 percent. Antigen test results have not yet been reported.

About 87K Wisconsin children have gotten COVID-19 vaccine, but some vaccinated parents are still hesitant when it comes to their kids
Young teens could work longer hours in Wisconsin under a GOP-backed bill
Packers return from bye with chance to clinch division
Water summit seeks to find permanent water source for Peshtigo residents struggling with PFAS pollution
Wisconsin's fall wolf hunt is on hold. Several lawsuits could affect whether it moves forward.
More WPR News

About 87K Wisconsin children have gotten COVID-19 vaccine, but some vaccinated parents are still hesitant when it comes to their kids
These pork products are being recalled over possible listeria contamination
Wisconsin reports first case of omicron virus variant
Health care providers are in limbo after federal court blocks COVID-19 vaccine mandate for staff
Wisconsin's fall wolf hunt is on hold. Several lawsuits could affect whether it moves forward.