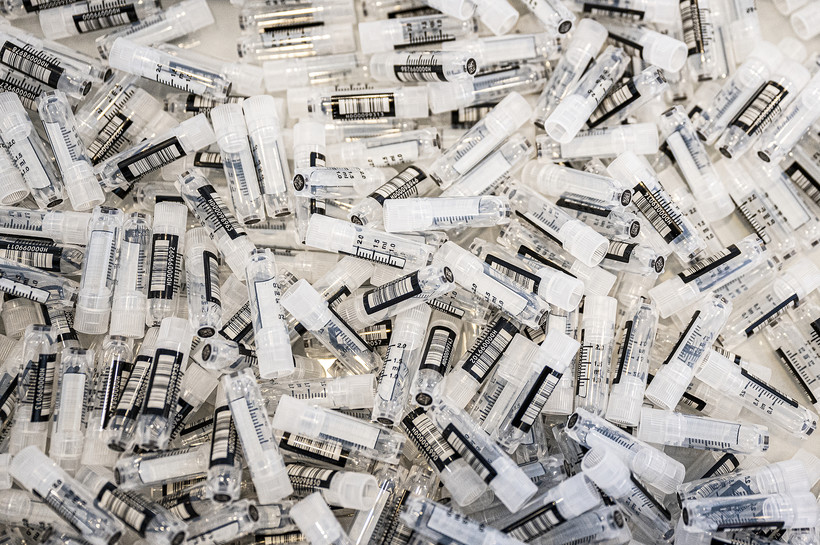 Saliva testing materials are pictured during a COVID-19 saliva test at the University of Wisconsin-Madison on Jan. 14, 2021. During the Spring 2021 semester, students will be required to take two saliva tests per week as part of the Safer Badgers COVID-19 response plan. Bryce Richter/UW-Madison

University of Wisconsin System campuses are planning to significantly increase COVID-19 testing during the spring semester. But many students at UW-Madison will be tested twice as often as those at the state's 25 other universities and branch campuses. In addition, new federal research shows tests used to detect outbreaks at UW System's other 25 campuses are more likely to miss positive cases than the type of tests being used at the state's flagship university.

On Thursday, UW-Madison announced it would require undergraduates living near the university to get tested for the coronavirus twice a week this spring. Undergrads living further away from campus, graduate students and employees will be tested once a week. 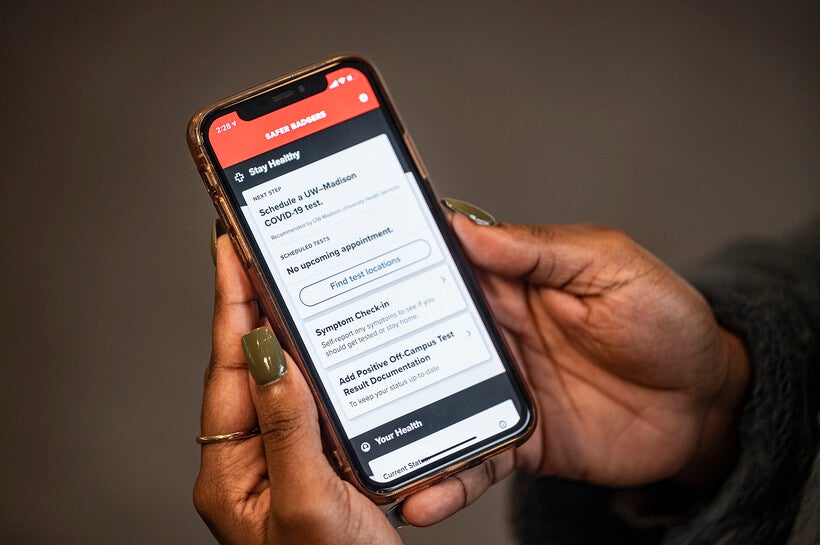 During a media briefing, UW-Madison Associate Vice Chancellor and Executive Director of University Health Services Jake Baggot said the campus will continue using what is known as PCR testing to identify cases of COVID-19. But he said in addition to nasal swabs, the university will also be using saliva samples to expand testing capacity.

The saliva based PCR test is called the Shield T3, developed by researchers at the University of Illinois. In an emailed statement, UW-Madison spokesman John Lucas told WPR the saliva and nasal tests have a sensitivity of more than 98 percent. Higher sensitivity rates mean tests have a lower probability of missing those with COVID-19.

Administrators, Thursday, were asked about early challenges related to the expanded testing regime including long lines. According to the Wisconsin State Journal, students took to social media to also complain about invalidated tests and increased time commitments. UW-Madison vice chancellor for student affairs, Lori Reesor, said she expects things to go smoother amid the start of the semester.

"So, there are a few bugs, but I think staff are working unbelievably hard," said Reesor. "We've been in pilot mode for a while. And so, I think we've gotten a lot of bugs out of the system."

The state's 12 other universities and their respective, two-year branch campuses will also be significantly ramping up testing. Those campuses will continue to use what are known as antigen tests for COVID-19 surveillance.

PCR tests are considered the gold standard for COVID-19 diagnosis because they are more accurate than antigen tests. But they're also more expensive and results take longer to process. Antigen tests, while less accurate, are able to provide results within 15 minutes.

In August, the UW System announced it would purchase 350,000 Sofia SARS Antigen FIA tests from supplier Quidel to screen students living in residence halls every other week. Those with positive results from the Sofia tests were quarantined and tested again using the PCR method for confirmation. Students and staff showing symptoms of COVID-19 were referred directly to PCR testing. Students living off campus were not subject to routine testing.

In a Friday interview with WPR, UW System Interim President Tommy Thompson was asked why the bulk of the state's universities were using antigen tests for surveillance while UW-Madison used the more accurate PCR tests. He said last year "nobody knew where to go" in terms of mass testing at universities, but he liked that antigen tests provided faster results.

"I made the decision I wanted to have results back as soon as possible," said Thompson. "I didn't want to wait 24 hours. That's why we decided to go with a quicker test then the PCR or the laboratory test, because if you don't get a result back in 24 to 48 hours, you have an opportunity to spread the disease to a lot of students."

Thompson said the objective was getting as many tests to students as possible, as frequently as possible.

Between Sept. 28 and Oct. 9, the Centers for Disease Control and Prevention studied the accuracy of the Sofia tests at UW-Oshkosh and UW-Madison. Researchers found the tests missed 20 percent of positive cases among symptomatic individuals and nearly 59 percent among asymptomatic carriers of COVID-19.

UW System officials have asserted the Sofia antigen tests were successful in identifying positive cases that would have otherwise gone unnoticed. The CDC study noted that antigen tests can be a useful compliment to COVID-19 surveillance at universities when coupled with confirmatory testing, which the UW System does.

When asked about the CDC findings Thompson said the current positivity rates at campuses speak for themselves.

"The net result is that both of the examples have worked very well," Thompson said. "Madison and the other campuses are all below 3 percent. That is fantastic when you think of the state at large as over 20 percent."

On Dec. 11, Thompson announced that students living in dormitories at all campuses other than UW-Madison will get antigen tests "at least once per week" during the spring semester. Students living off-campus along with faculty and staff will get them at least every two weeks.

To reach the expanded testing goals, Thompson said the system plans to purchase BinaxNOW antigen tests made by supplier Abbot to compliment its existing stock of Sofia tests.

In a statement sent to WPR, UW System spokesman Mark Pitsch estimated around 650,000 antigen tests will be conducted at campuses other than UW-Madison this spring.

The BinaxNOW tests were already used at campuses this fall during a community surge testing campaign spearheaded by UW System and the CDC. Thompson said the federal government has offered $65 million in federal support toward the effort.

As of Jan. 21, the surge testing campaign has administered 220,316 BinaxNOW tests, mostly for members of communities around UW campuses. The tests detected 17,714 positive cases of COVID-19.

On Friday, the CDC posted an analysis of community test results in Arizona collected using BinaxNOW. It found the tests missed nearly 36 percent of positive cases among symptomatic individuals and more than 64 percent of cases among those without symptoms when compared with PCR test results. The BinaxNOW tests, like the Sofia antigen tests, showed a high specificity rate, according to the CDC, which means they were not likely to produce false negative results.