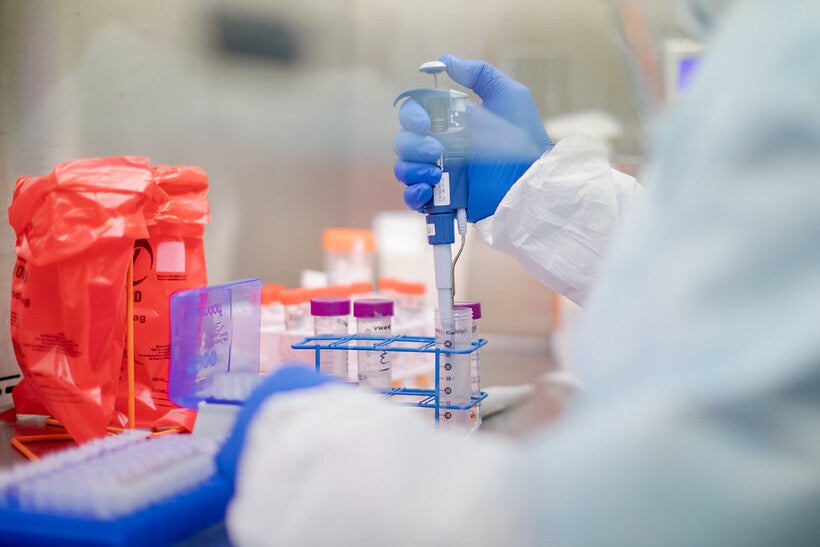 Pennsylvania Commonwealth microbiologist Kerry Pollard performs a manual extraction of the coronavirus inside the extraction lab at the Pennsylvania Department of Health Bureau of Laboratories on Friday, March 6, 2020. Governor Tom Wolf (CC-BY)

UW System Ordering Over 350,000 COVID-19 Tests For Students This Fall

University of Wisconsin System President Tommy Thompson says that the UW received around $32 million in order to offer COVID-19 testing to more than 350,000 students across the state, along with bi-monthly screening in residence halls.

However, a national health expert says the tests sought by the UW System might not be enough to flag potential outbreaks, especially if students are only being tested every other week.

Thompson says Gov. Tony Evers allocated $32 million to the UW System via the federal CARES Act relief bill. The funds will be used to purchase 34,000 RT-PCR tests, which detect genetic material contained within the living coronavirus strain. Health officials consider RT-PCR tests the gold standard for diagnosing those with COVID-19 symptoms, although plastic cartridges needed to complete testing are in short supply.

Another 317,000 antigen tests, which detect proteins contained in the virus, will be used to screen students living in dormitories every two weeks. The antigen tests are less accurate than RT-PCR tests but are less expensive.

During an interview with reporters on Thursday, Thompson said the UW System had been working to contract with a major hospital system, which he would not name, to provide RT-PCR testing for students. But he said a shortage of testing equipment — like plastic cartridges and reagents used to process samples — killed the potential deal.

"So, they completely backed off and said, 'In order to take care of our own patients, we cannot say we're gonna be able to help you, Tommy,'" said Thompson.

Because of that, Thompson said the system reached out to test supplier Quidel, which makes the less accurate antigen tests. He said they’ve placed an order for 317,000 tests, but eight other states are vying to get them as well.

"We were able to get in line and get a contract for 315,000 thousand tests," said Thompson. "Now, the problem is, is that the federal government can jump in front of us. But we think we're okay with Quidel."

Thompson said he was told by national health experts that the Quidel tests were around 96 percent accurate in detecting COVID-19. He said he expects to have 12 Sofia testing machines, which process the antigen tests, next week.

"We think we got a very valid, defensible plan that's going to take care of the health and welfare and safety of our professors, our instructors and our employees and above all, our students," he said.

UW-Eau Claire student health clinic director Pat Kress said her campus was planning to use the "gold standard" RT-PCR tests this fall. She said the campus had placed an order but the medical supplier told her it would be delayed.

"The company came back to us and said that they have no idea when they would be able to send it to us," said Kress "So, you know, we were hoping to get something in the first semester. Now, I think we'll be lucky if we get something in January. But I don't know. Nobody has said."

Kress said UW-Eau Claire is also working with an outside lab and local hospitals to increase available testing. She said the UW System’s plan to provide the less-accurate antigen tests to screen students in residence halls would still be useful for tracking potential outbreaks on campus.

"So, if you have a test, that's not quite as accurate, but still, the numbers tick up," Kress said. "You know that something is going on and we need to dig a little deeper (into) maybe a certain dorm or this or that to try and halt something in its tracks."

Dr. Omai Garner is the director of clinical microbiology for the University of California Los Angeles Health System. He and other national health experts have pushed for repeat testing using the antigen tests due to the supply chain issues tied to the RT-PCR tests. He said if the more accurate testing supplies were more widely available, the UW System would likely be using those.

He said the antigen test ordered by the UW System is only 96 percent accurate in detecting COVID-19 within one to five days of the onset of symptoms. He said because of that, the plan to only test dorm residents twice a month is not ideal.

"It's definitely better than nothing," said Garner. "You have the opportunity. It's just that a one-time asymptomatic antigen test… it's not very good sensitivity. And the idea here is, how many asymptomatic students can you catch and mitigate outbreaks? Well, now you're only doing that once every two weeks, so it becomes much more difficult to catch and mitigate outbreaks that way."

UW-Madison has announced its own testing plan that will be partially funded by $8 million from the governor’s office. On July 17, the university announced it would provide free COVID-19 testing for all students and employees including a mandatory screening program for residence halls.

Other campuses in the UW System have announced testing options for symptomatic students, but not for employees.