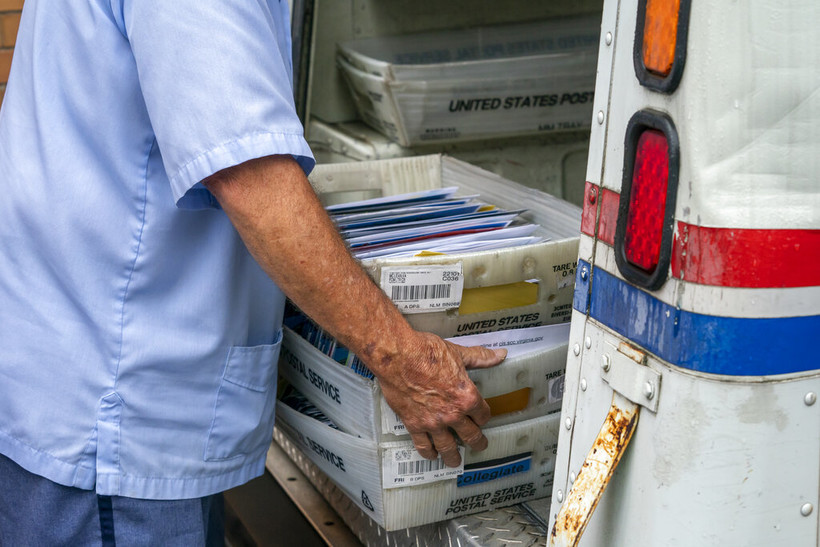 In this July 31, 2020, file photo, letter carriers load mail trucks for deliveries at a U.S. Postal Service facility in McLean, Va. The success of the 2020 presidential election could come down to a most unlikely government agency: the U.S. Postal Service. J. Scott Applewhite/AP Photo

A mail carrier in South Milwaukee believes the way the United States Postal Service has handled a positive COVID-19 test has put employees and the public in jeopardy.

The carrier, who doesn’t want his identity revealed for fear of retaliation, said Friday morning post office leaders from Oak Creek and Northern Illinois told about 30 carriers in South Milwaukee that someone from the South Milwaukee post office had tested positive for coronavirus.

The employees in South Milwaukee were told they were not going to be tested by the health department, and they were expected to sort and deliver the mail Friday and beyond.

"The conversation felt hostile," the carrier said. "We are probably 3 feet from each other at all times when we are inside the building. The other issue is the mask policy has not been very well enforced within the post office."

The carrier plans to get tested.

"To have us told that we have to get tested on our own, rather than reassure us that they are going to get us tested… this could be a big deal if we’re not careful," he said.

Bob Sheehan, a spokesperson for USPS, confirmed in a statement that an employee at the South Milwaukee post office tested positive for COVID-19.

"We believe the risk is low for employees who work at the South Milwaukee Post Office, but we will keep our employees apprised as new information and guidance becomes available," Sheehan said, adding that the safety of employees is USPS’s highest priority and USPS follows guidance from the Centers for Disease Control and Prevention.

"The CDC and the United States Surgeon General have indicated that it is unlikely to be spread from domestic or international mail, products or packaging," Sheehan said.

A representative from the South Milwaukee Health Department did not respond to requests for comment. The city released a statement from City Manager Tami Mayzik saying the health department does not provide testing for businesses.

"To our knowledge, one local USPS worker has tested positive for COVID 19," according to the statement. "This does not constitute an outbreak. It is our understanding that close contacts have been notified and are quarantining. USPS employees have access to testing similar to other people through their personal health care providers and the special testing clinics that have been set up."

As of Monday, South Milwaukee had 470 positive coronavirus cases and 57 probable cases, according to the health department’s Facebook page. The city had nine COVID-19-related deaths.

On Sept. 4, the city had 416 cases, according to the Facebook page.

Even if more South Milwaukee postal employees get sick, it would likely go unknown without the postal carrier coming forward. This week, a judge in Waukesha County temporarily blocked the state from going through with its planned release of data going back to May about which Wisconsin employers had at least two cases of COVID-19.

The order comes in response to a lawsuit filed Thursday seeking to prevent the state from releasing that data by the state's largest business group, Wisconsin Manufacturers and Commerce, in conjunction with chambers of commerce in Muskego and New Berlin.

"There’s a lot of things up in the air, and trying to figure out if we are all infected, have we already passed it onto our loved ones," he said. "And we deal with the public all day."