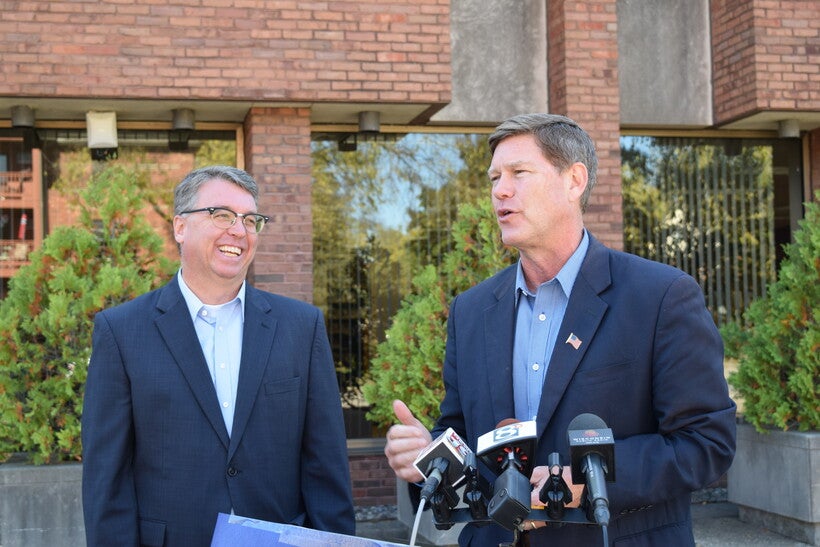 Retiring U.S. Rep. Ron Kind has endorsed a candidate running for his seat in 2022.

The news comes a day after Eau Claire business owner Rebecca Cooke entered the race, joining Pfaff and Navy veteran Brett Knudsen on the Democratic side. The 3rd Congressional District is expected to be the most watched race in Wisconsin in next year's election, after Kind announced this summer he would not be seeking reelection.

During a press conference in La Crosse, Kind said he was glad to endorse Pfaff, saying he believes Pfaff shares the same values as the voters in his district.

“He’s deeply rooted in our community here. He is one of the most pragmatic and hardworking people that I've ever known in my life and I know that he recognizes that we have a broken political system today. It's dysfunctional because it's too polarized,” Kind said.

Pfaff previously served as Kind’s chief of staff and worked for the U.S. Department of Agriculture during the Obama administration.

He was appointed to secretary of the state Department of Agriculture, Trade and Consumer Protection by Gov. Tony Evers, but was fired by the Republican-controlled Senate in 2019 after continued conflict between lawmakers and the administration. Pfaff was elected to the state Senate in 2020.

When asked why he chose to make an endorsement almost 10 months before the primary race, Kind said his longtime relationship with Pfaff made the choice simple.

“I think one of the real distinguishing characteristics in this upcoming race is who’s been here? Who was born and raised here? Who has been working here every day and who shares our values?” Kind said.

"I thank Congressman Kind for his endorsement, his friendship and for his service to western Wisconsin and our nation," said Pfaff in a press release. "Ron exemplifies so much that I strive for — hard work, respect for others, listening and to never forget where you come from and who you work for."

Both Pfaff and Kind did not comment on Pfaff’s Democratic opponents in the election, instead painting the race as a choice between the state senator and Republican candidate Derrick Van Orden.

Van Orden narrowly lost to Kind in the 2020 election and announced in April that he would be running for the seat again.

“He's someone that would go to Washington to burn the place down, to blow the place up,” Kind said. “Why in the world would we send another person like that out in DC to participate in the carnage and the paralysis that’s affected our nation? I know that Brad will give us something different.”

In reaction to the endorsement, Republican candidate Derrick Van Orden released the same statement he's previously made about Pfaff and other Democratic candidates, calling him "another Pelosi-Approved rubber stamp for her radical agenda."

Fellow Democratic candidate Knudsen said in a statement the endorsement shows Pfaff represents "no substantive change" from Kind, who has held the seat for 25 years.

"For a path forward, we have to have someone willing to take a stand for progressive policies that unite the people. The endorsement empowers the march forward for uniting workers across the district for real effective change in our campaign," Knudsen said.

Cooke said in a statement that the congressional seat must be earned and not "given from one politician to another."

"We need someone with a fresh perspective and real world experience who has dealt with the challenges families across western Wisconsin are facing and can deliver solutions," Cooke said. "The people of the district will decide who their next congressperson is, not, with all due respect, the politicians."