Wisconsin Hospital Report Shows $1.2B In Uncompensated Care In 2018
By Shamane Mills
Share:

The amount of unpaid medical bills continues to rise at Wisconsin hospitals, but remained steady nationwide in 2018.

Uncompensated care — a combination of medical bad debt and charity care — rose 7.6 percent in 2018 compared to the previous year, according to an annual report compiled by the Wisconsin Hospital Association.

Bad debt refers to debt a patient cannot or will not pay, whereas charity care is when hospitals offer care to patients who fit certain criteria at no cost.

Hospitals across the country had $38.4 billion in unpaid bills; the same as the previous year.

Unpaid medical bills dipped after the Affordable Care Act went into effect, but have continued to push upward in recent years.

"It’s lower than pre-ACA but it has been on the rise. There are several factors that are causing that," said Brian Potter, senior vice president at the Wisconsin Hospital Association. 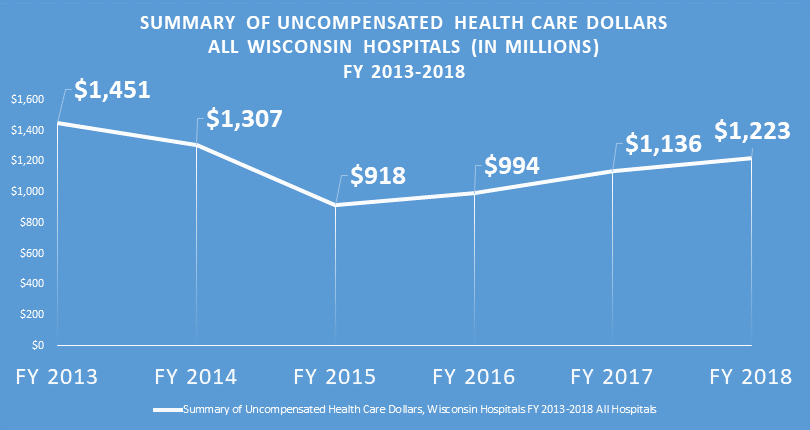 Patients generally have higher out-of-pocket costs for health insurance, including older residents with Medicare which doesn’t pay as much as commercial insurance. There’s also been a drop in the number of people using the marketplace to buy private insurance on the federal exchange Healthcare.gov.

"Using a successful national strategy adopted in both red and blue states, Wisconsin can reverse this trend on rising bad debt and help reduce the number of un- and underinsured Wisconsinites — many of whom are children — by expanding Medicaid for BadgerCare Plus," said Bobby Peterson Public Interest Attorney of ABC for Health. "We need to create programs and policies that promote seamless and comprehensive health care coverage and care that includes strong consumer protections."

Hospitals in Milwaukee County accounted for nearly 30 percent of the state’s uncompensated care.