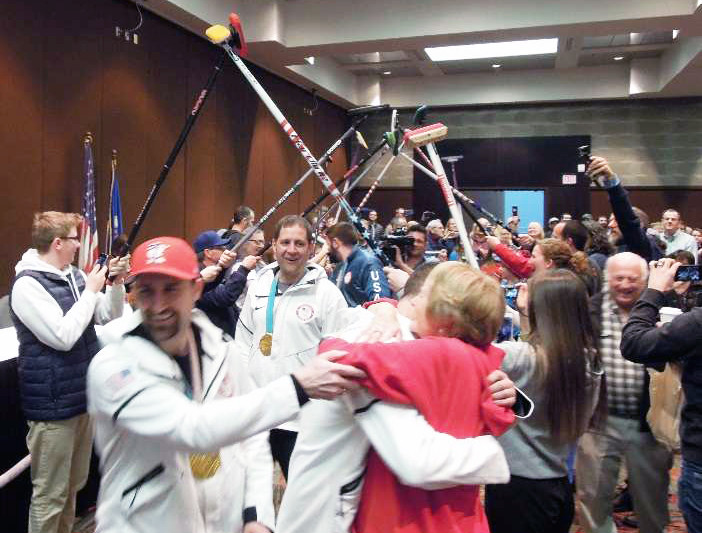 Members of the U.S. men's curling team enter the Duluth Entertainment and Convention Center under a canopy of curling brooms. Eliot Sweere/WPR

With its brooms, stones and quirky culture, curling can sometimes be the butt of Olympic jokes, including at the recent 2018 Winter Games. But, nobody was laughing as nearly 1,200 people cheered on members of the U.S. men’s curling team while they showed off their Olympic gold in Duluth Tuesday evening alongside members of the U.S. women’s team.

Bagpipes played and the crowd cheered as team members entered beneath a canopy of curling brooms at the Duluth Entertainment and Convention Center. The men’s team brought home Olympic gold after coming from behind to defeat Sweden 10-7 over the weekend. Team captain John Shuster of Superior said his teammates never gave up on him or the games even as they faced a 2-4 record and were just one loss away from elimination.

"I don’t ever plan on putting this thing in a safety deposit box or putting it on display in my house because this medal is mine, and, yeah, I possess it," said Shuster. "But, it is something bigger."

While the Olympics were an unforgettable experience, Duluth’s John Landsteiner, the team's lead-off curler, said it doesn’t hold a candle to the reception back home.

"The Olympics are great and all, but this is way cooler than the Olympics right now," he said. Men’s curling team vice skip Tyler George of Duluth said representing the U.S. at the Olympics was an amazing experience.

George said their performance on the world stage is what drove them to bring home gold because of how much it meant to the community back home. Superior Mayor Jim Paine said the men’s curling team represented the sport and the cities of Duluth and Superior well. He said their gold medal win belongs to the entire Twin Ports community.

Team members said they were overwhelmed by the support from friends and family back home on social media. "Being a part of Team USA was honestly unbelievable," she said. "I think I can speak for all of us when we say we feel so grateful and honored to represent the United States and be a part of Team USA and also represent Duluth and all of you guys. We hear all of your cheers from home and feel all of the love you give us while we’re away competing and it means the world to all of us."

Women’s U.S. curling team member Aileen Geving of Duluth said she’s always had a passion for curling, but the Olympics changed everything.

"I’ve always had fun doing it, and I’ve always made friends,” she said. "I’m not somebody who can usually sit still."

Community members, parents and children were also unable to sit still as they lined the room, waiting for signed autographs and photos with the Twin Ports’ Olympic athletes.

Meanwhile, the fourth member of the U.S. men's team, Matt Hamilton, showed off his new gold hardware to hometown supporters at the Madison Curling Club in McFarland. Hamilton's sister, Becca, played on the U.S. women's team and the two competed together in the Olympic mixed doubles tournament, finishing seventh.