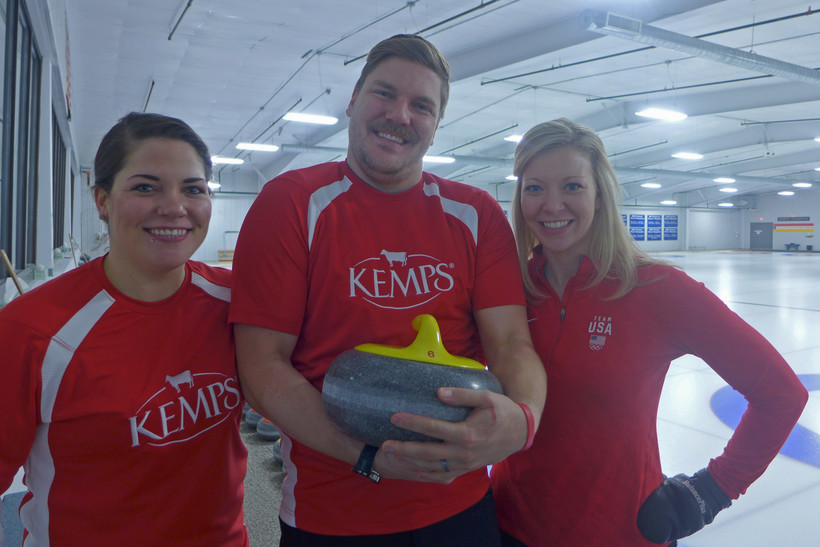 This year, the Madison Curling Club is sending three athletes from McFarland. It’s a place with a long history of cultivating Olympic qualifiers.

One of them is Nina Roth, who’s been curling since she was 10 years old.

In curling, players take turns lunging down the sheet of ice while pushing a 42-pound rock. They sweep the ice with a special broom to help glide the rock to a target, known as the house. The team that has rocks closest to the center of the house gets the points. It’s similar to shuffleboard or even bocce ball. "The reason they call it curling is because the rocks actually do kind of make a turn at the end and every sheet of ice is different. It's going to curl more or less," said Roth.

Roth is the skip on the women’s Olympic team, which is kind of like the captain.

"We (the skips) are placing the broom so that our teammates have something to aim at," said Roth. "We're calling the strategy, so depending on where the other team is placing their rocks, we're making offensive or defensive moves. It's a big responsibility, but it's great."

Roth spent a lot of time practicing at the Madison Curling Club up until the Olympics. She said it’s like her second home.

"Growing up in Madison, we have a lot of Olympic curlers that came through this club. So I grew up playing with a bunch of them and admiring them," Roth said. "Some of them were actually my coaches. I was very, very fortunate. So, to finally be an Olympian along with them is really, really cool."

Roth was coached by Steve Brown, an Olympic coach who’s part of a Madison curling dynasty.

Another first-time Olympian is Roth's teammate, Becca Hamilton. The two have curled together since they were teenagers.

"Once I was drug out on the ice, I didn’t look back," said Becca. "I was down here every single day before school and after school, playing in multiple leagues at night. I was hooked." Becca isn’t the only Hamilton heading to Pyeongchang, South Korea for the Olympics. Her brother, Matt Hamilton, is competing on the men’s curling team. And together, Matt and Becca are competing in a brand new Olympic event: mixed doubles curling.

"About four years ago they announced it was going to be an Olympic sport, and that's when we metaphorically stood back and looked at each other and were like, 'Yeah, this is something we got to do,'" said Matt. "The brother-sister thing, we’re going to have an advantage as far as what we know about each other and how we play. It was kind of a no-brainer."

The Hamiltons have been getting a lot of attention outside of Madison. They’re making headlines and even appeared on "The Tonight Show Starring Jimmy Fallon."

And with the attention, comes more money. Team USA’s curlers have received corporate sponsorships and have even appeared in advertisements, for products like Cheetos.

This is huge for the athletes, since travel and equipment can be really expensive.

When not curling, the Hamiltons and Roth have average day jobs. Becca works for Dick's Sporting Goods. Matt tests home appliances for Spectrum Brands. Roth is a nurse.

The sponsorships help make up for the fact that each of them is missing a month of work to participate in the Olympics.

"And also, all the time and effort we're putting into training and when we're not at work, it helps get by on a day-to-day basis," Becca said. "A lot of curlers from different countries, this is their job. They get a salary to curl. We don't get that yet in the U.S."

"That would be just dreamy," added Matt.

Then the Hamiltons, along with Roth, could focus their time on curling and training the next generation of Olympians to come through the Madison Curling Club.

Hear a full interview with Becca and Matt Hamilton on WPR's "Central Time."