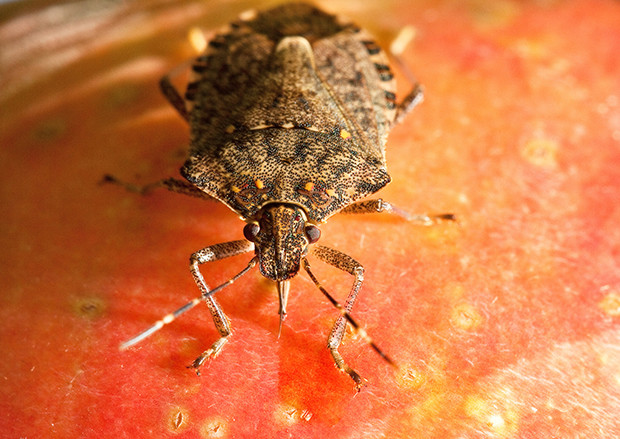 A brown marmorated stink bug feeds on an apple, one of its preferred crops.

The Uncertainties Of Preparing For Brown Marmorated Stink Bug

Once found only a four-hour ferry ride across Lake Michigan, the brown marmorated stink bug poses a growing threat to Wisconsin orchards and vegetable crops. The invasive species has established a breeding population in portions of Wisconsin during the last several years and while not yet an agricultural pest in the state, it’s clearly could become one. Since the late 1990s, the bug has caused tens of millions of dollars in damage to crops in the eastern half of the U.S., and it's spreading west

In 2015, the brown marmorated stink bug became an agricultural pest in Michigan, the country’s third-largest producer of apples. That's the bug's preferred crop, considering how it causes damage to agriculture in the U.S.

Michigan State University entomologist Howard Russell said how much damage can be blamed on the brown marmorated stink bug is difficult to determine — it definitely ruined a lot of apples in Michigan last year, but the visible, rot-spotted damage it causes looks similar to the effects of a plant disorder called bitter pit.

"We'll have a better handle on that this year as numbers of the bug increase in the fruit-growing areas," Russell said.

The U.S. Apple Association estimated the bug destroyed $37 million worth of apples across Pennsylvania, Maryland, Virginia and West Virginia in 2010. That figure just factors in the value of the apples lost that year, but not the added operational costs the bug caused for farmers and distributors.

Stink bugs probe fruit in the field while grazing, creating small holes that expose their flesh to air and microorganisms. The damage often doesn't show up until an apple is in cold storage and the holes have escalated to visible rot, said Christelle Guédot, a University of Wisconsin-Madison entomologist and fruit crop specialist with the University of Wisconsin-Extension. That means before anyone learns the apples are ruined, money has been spent to pick, transport and refrigerate them.

Although Wisconsin isn't one of the biggest apple-growing states, it still produced about 40.7 million pounds in 2014, according to the Wisconsin Department of Agriculture, Trade and Consumer Protection. Perhaps more importantly, though,Wisconsin apple producers tend to be concentrated in  southern and eastern parts of the state, overlapping with counties where the brown marmorated stink bug has been spotted.

Apple growers around the country have spent years calibrating their use of pesticides. Their goal is to target specific pests more efficiently, select chemicals and spraying in an effort to minimize damage to beneficial insects.

When the brown marmorated stink bug shows up in an orchard, the grower's entire pest-control plan goes out the window. The bug also tends to hit orchards hardest in August and September, when apple growers are harvesting. That's also the time of year when, as University of Connecticut fruit crop and pest management expert Mary Concklin wrote in 2011, "the sprayers have been put away for the season." This means the late-summer appearance of the brown marmorated stink bug can complicate pest-management practices and interrupt the workflow of harvesting and shipping apples.

"The bug is so devastating that people are going to be spraying pretty much on a calendar basis," Russell said. This in turn means more spraying and "more trips to the orchard," he added. The costs can add up fast.

Certified organic farmers are in even more of a bind when a new invasive pest shows up. In Wisconsin, Joe Fahey, owner of the 15-acre Washington County apple farm Peck & Bushel, said he's been worrying about the brown marmorated stink bug for several years. As an organic farmer, Fahey can use pyrethrins, a class of insecticides naturally created by some species of flower (synthetic pyrethroids are a manufactured analog and not permitted in organic farming), as well as set traps baited with natural pheromones or spray apples with kaolin clay.

"We really don't have any knock-down kill stuff," Fahey said.

Using kaolin clay, though a popular and effective protectant in organic farming, is another example of how managing the bug can slow growers down during the crucial period when they're trying to get fruit to market. The clay is a chemical irritant to many pests, and when applied properly, it coats fruit with a chalky layer that discourages insects from eating the fruit or laying eggs on it.

"We're spraying white powder over our fruit, and it makes things more difficult when we go to process and wash everything," Fahey said.

Rutgers University entomologist Anne Nielsen and her collaborators have also explored non-pesticide strategies that organic farmers can use to manage the brown marmorated stink bug. These include planting sunflowers and sorghum near orchards as "trap crops" to draw the bugs away from the actual cash crops, in an effort to misdirect the bugs while they are overwintering.

Scientists with the U.S. Department of Agriculture have spent nearly a decade researching the possibility of importing the parasitic wasp, Trissolcus japonicus, to control brown marmorated stink bug population. (Some of the wasps have already made their way to the U.S., in small numbers). So far, this effort has not progressed beyond lab-based experiments, and Nielsen said it’s not clear if wasps released in the U.S. would follow the stink bugs into crop fields.

"In Asia it's very efficient in terms of egg predation, but what we don't know about the U.S. population yet is if it will move into crops, or if the populations will be constrained into the wood edge," she said.

For Wisconsin's 2016 growing season, apple growers will be keeping an eye out for the brown marmorated stink bug and possibly monitoring with traps, Guédot said. Apart from maybe stocking up on different insecticides and traps, there isn’t a whole lot more that orchards can do. She noted that native stink bugs do occasionally cause problems for fruit growers, but it’s more of a "spotty problem" because those species have natural predators keeping their numbers in check.

In the near term, Wisconsin fruit growers should be more worried than farmers who grow field crops like corn, soybeans and grains.

Bryan Jensen, a UW- Extension pest-management specialist, noted that a few blemishes don't ruin a soybean or ear of corn that is going to be processed into something else. But a comparably damaged apple or peach won't pass muster with buyers for grocery stores who want their fruit to look as close to flawless as possible. Of course, a stink bug problem can cut into a corn or soybean grower's yield, but the threshold is higher for when the insect starts to really harm a farmer's bottom line and instigate changes in management practices.

Fahey hasn't heard a lot of concern about the brown marmorated stink bug from fellow Wisconsin apple growers. He said this is perhaps understandable, especially because conventional growers have broad-spectrum pesticides at their disposal if the bug shows up in their orchards. But he hasn't heard many success stories from organic apple farmers dealing with the bug in other states, and he worries about how his orchard might fare against it.

"We're kind of hoping that our colder climate kind of reduces the population from year to year versus some of the southern states, where it seems to be the most problematic," Fahey said.

Sara Ecker, who manages the 40-acre orchard at Ecker’s Apple Farm in Trempealau County, said she’s been having an email conversation recently about the brown marmorated stink bug with fellow apple growers around the state. "They all said the same thing — the words 'on the radar,' all of them use that term," Ecker said. "Everyone is aware, but no one is throwing the baby out with the bathwater."

Ecker has used monitoring traps for brown marmorated stink bugs in the past, and she hopes to take part in a monitoring program that Christelle Guédot, the UW-Extension entomologist, is running this summer. But Ecker said she's feeling optimistic about the 2016 apple season.

"I used to be more of a sky-is-falling type person," Ecker said, referring to the time about seven years ago when she first started learning the ropes in her family's orchard. Since then, she's learned that "there are always always challenges and something new is always coming down the pike." She stresses that adjusting to new challenges is simply what farmers do, and points out that Wisconsin growers will have 20 years worth of experience and research to draw on when the bug shows up.

"Even the places that have been hit hardest by this in the mid-Atlantic, they're coming out on the other side," Ecker said.

Even knowing the damage the brown marmorated stink bug can cause, UW-Extension experts like Bryan Jensen and Annie Deutsch, an agricultural agent in Door County, said growers should stay informed and prepare. They aren't ready to sound an alarm just yet, though

"Farmers are very resilient. They're going figure out what to do when the problem arises. I would say, if there's just fear surrounding this, that's not helpful," Deutsch said.

"We've hopefully learned from everyone to the east of us," she added.