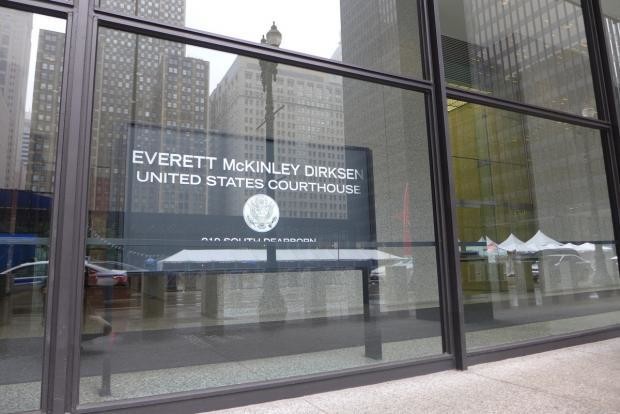 The Dirksen Federal Building in Chicago houses the 7th Circuit Court of Appeals.

The U.S. Senate Judiciary Committee has signed off on the appointment of a Madison lawyer to the nation's oldest federal appeals court vacancy, but it's not clear that the full Senate will follow suit.

Senators voted 13-7 to advance the nomination of Donald K. Schott for a spot on the 7th Circuit Court of Appeals in Chicago.  All Democrats voted for Schott as did four Republicans, including Senate Judiciary Committee Chair Chuck Grassley of Iowa.

Democrats pressed Grassley on why he was holding the vote when Republican leaders have vowed to stop other judicial nominations this year.

"If we're finished with filling vacancies from Supreme Court on down, say it," said Sen. Dick Durbin, a Democrat from Illinois.  "That I think is an honest approach. This, to me, deceives people into believing they have a chance when history tells us they don't."

Grassley said that in 2014 the Senate approved several judges the month after the election.

"So let's not try to predict the future," Grassley said.  "We don't know what the future's going to hold."

President Obama nominated Schott in January after he received a majority vote from a special panel established by Wisconsin Sens. Ron Johnson and Tammy Baldwin.  Johnson objected to Obama's first 7th Circuit nominee in 2010, but earlier this year, he cleared the way for Schott's nomination to proceed.

“I signed the blue slip recommending that the Judiciary Committee consider the nomination of Don Schott, which it reported out favorably today," Johnson said Thursday.  "I congratulate Mr. Schott on his nomination’s progress.”

Baldwin has been more aggressive in her support, pushing Republicans to take the next step and confirm Schott.

"The people of Wisconsin and the entire 7th Circuit deserve a fully-functioning court," Baldwin said in a statement yesterday.  "It is my hope that Sen. Johnson will join me in calling on Majority Leader (Mitch) McConnell to schedule a floor vote so the Senate can confirm Don Schott without undue delay.”

The 7th Circuit Court of Appeals has weighed in on several high profile Wisconsin issues, from voter ID to John Doe investigations to collective bargaining.  Most of the sitting judges there were appointed by Republican presidents.

Even though 7th Circuit's vacancy is more than six years old, it's been overshadowed this year by the vacancy on the U.S. Supreme Court.

Senate Republicans have promised to block any Supreme Court nominees by Obama, saying they should be left to the next president and Congress.  University of Richmond Law Professor Carl Tobias says that's not to say that Republicans will block lower court nominees like Schott.

"Much will depend on McConnell and whether he chooses to allow a debate and vote," Tobias said, "and on Sen. Johnson, who could prevail on McConnell to hold them."