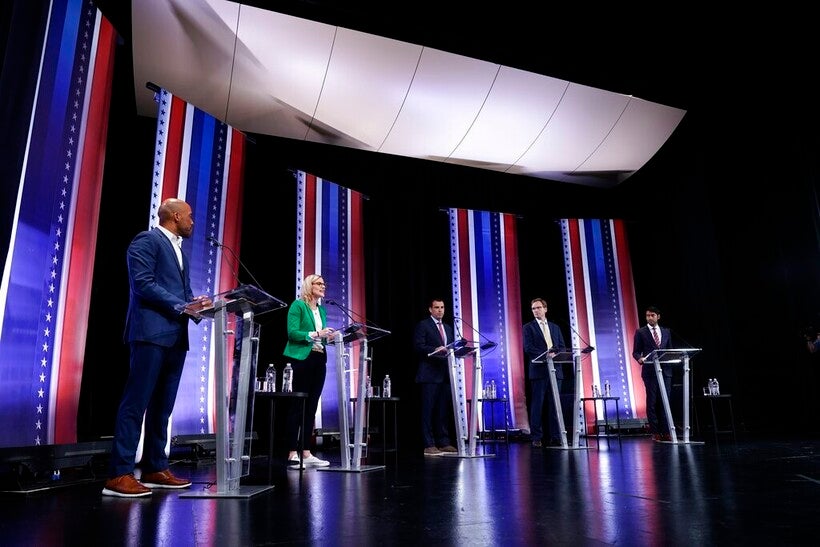 U.S. Senate debate: Democratic hopefuls focus mostly on Johnson, not each other

Only inter-party attack ends with State Treasurer Sarah Godlewski saying she won't 'be lectured by men' on importance of elections, abortion
By Rich Kremer
Share:

Democratic U.S. Senate hopefuls mostly held their fire on one another during the first and only candidate debate ahead of the Aug. 9 primary election. Other than a couple of interactions with each other, they focused on their platforms and attacked two-term Republican incumbent Sen. Ron Johnson.

Godlewski called for suspending the federal gas tax to lower the price of gas, which has fallen recently in Wisconsin but still averaged $4.52 per gallon earlier this month. She also spoke generally about lowering the price of prescription drugs.

Olikara said as Senator, he would push for expanding student loan debt forgiveness programs and call on young borrowers to serve with AmeriCorps in order to qualify.

Lt. Gov. Barnes used the question to highlight his middle-class upbringing in Milwaukee and said he would push to expand the federal Earned Income Tax Credit and make the Child Tax Credit, created as part of the 2021 American Rescue Plan, permanent. Barnes chided oil and pharmaceutical companies he said were "using inflation as a smokescreen to continue to jack up prices."

Lasry, the Milwaukee Bucks executive, called for raising wages and moving more manufacturing to America and pointed to a $15 minimum wage for workers at the Fiserv Forum. The stadium built after the Wisconsin Legislature passed a bipartisan bill directing $250 million in taxpayer funds toward its construction.

Nelson has attacked Lasry and Barnes for their support of using public money on a private venture, but the issue did not come up Sunday night.

All candidates were asked how inflation has impacted their own families, but none gave a direct answer.

Barnes shared a story about his mother having an abortion prior to his birth and reiterated his support for eliminating the U.S. Senate filibuster rule in order to codify Roe protections into law. When asked if he would support using federal land to perform abortions, Barnes said he "would support any option that is within reach" to make sure abortion access is protected.

Lasry referred to his wife's role working as Chief of Staff for Planned Parenthood of Wisconsin and also called for killing the filibuster to "protect a woman's right to choose to make her own health care decisions."

Nelson doubled down on being the only Democrat in the primary calling for the Supreme Court to be expanded in order to dilute the current conservative majority.

Nelson then blamed the recent U.S. Supreme Court abortion ruling on Democrats, and Godlewski in particular, for not turning out to vote in 2016.

"Because we didn't turn out in 2016, we gave three appointments to Donald Trump and now women, workers, the environment will be suffering for decades," said Nelson.

Godlewski worked for former Senator Hillary Clinton's 2016 presidential campaign and didn't vote in 2016 because she wasn't sure she met residency requirements. She fired back at Nelson, saying that as the "only woman on this stage" she wasn't about to be lectured "by any men" about how important the 2016 election was.

"I traveled the state, organizing women to make sure that he (Trump) would not win," said Godlewski. "So, I don't need to be lectured about how important this really is."

The panel of candidates were asked how they would address rising crime, particularly gun violence and mass shootings.

Barnes called for "doing the things that we know prevent crime from happening in the first place" such as boosting school funding.

Lasry, Godlewski and Nelson said they would support banning the sale of assault weapons if elected to the Senate.

Money has been flowing into Wisconsin's U.S. Senate race with millions raised and spent by Democrats and Republican Ron Johnson.

Campaign finance reports filed with the Federal Elections Commission on June 15 show Johnson raised nearly $6.2 million between April 1 and June 30 via his Ron Johnson for Senate committee. He spent just more than $6.2 million during that period and ended with $3.6 million cash on hand.

In the Democratic field, Lasry brought in more than $7 million between April 1 and June 30, $6.5 million of that were loans from Lasry himself. The Bucks executive spent more than $6.7 million during that time and ended the period with nearly $1.3 million cash on hand.

Lt. Gov. Mandela Barnes' FEC filing showed he raised more than $2.1 million, spent more than $2.2 million and was left with nearly $1.5 million cash on hand at the end of June.

Lasry was the only Democrat to out raise Johnson between April 1 and June 30.