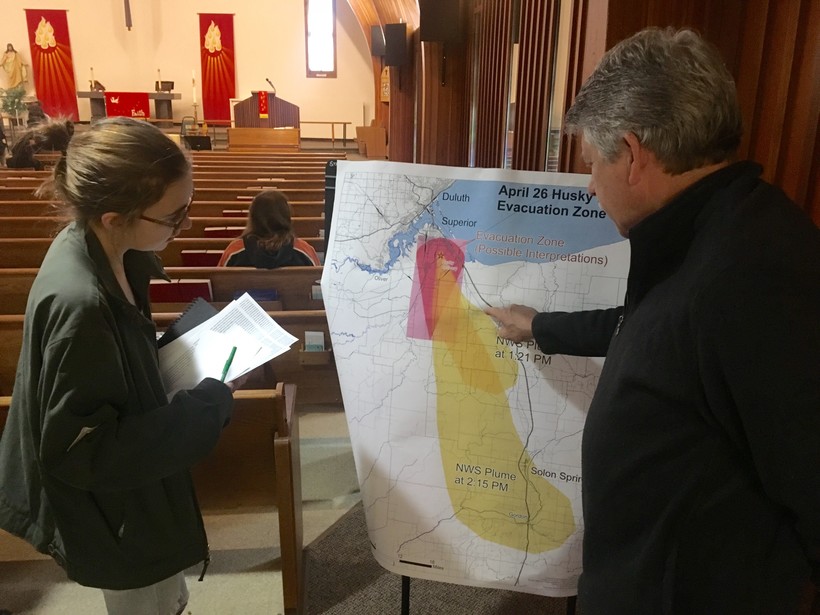 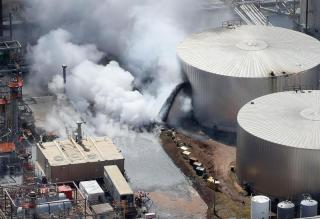 Twin Ports residents shared their doubts about environmental monitoring in the wake of explosions and fires at the Husky Energy oil refinery in Superior last month. They voiced a lack of trust in government and company officials who are overseeing air, water and soil quality.

People attended two meetings in Superior this week to share their questions and concerns about public health following the incident. Linda Degraef lives nearby the Husky refinery and attended Wednesday’s meeting at Zion Lutheran Church. Degraef wants the company to take responsibility.

"I want to know what they’re doing to make this a better community," said Degraef. "They have to restore their reputation with us."

"Since the fire we have been monitoring both air and water quality, and providing our data to the agencies that have oversight and responsibility for the appropriate reporting levels and standards," said Husky spokeswoman Kim Guttormson in an email. "These agencies have the expertise on the standards that are in place and what different levels mean, making them the best source for any context around results."

Results from GHD’s air monitoring have been posted almost daily on the Douglas County website. Still, that’s not good enough for Ingrid Johnson-Evavold, who lives 10 miles south of the refinery and attended Monday’s meeting at Superior Middle School.

"There’s a conflict of interest there," she said. "I won’t be satisfied by them saying everything is going to be OK."

An EPA spokeswoman said in a statement Thursday that the agency determined the facility was using adequate air monitoring resources.

The agency said the data has not shown contaminants of concern in the community. Even so, University of Minnesota-Duluth professor Steve Sternberg said during Wednesday’s meeting that agencies weren't telling the whole truth when they've discussed preliminary findings related to chemicals burned in the fire, specifically related to soil.

"Once it’s on the soil, it’s almost impossible to detect because it’s going to be in very tiny concentrations. It’ll be below their detection limits, but it still can be dangerous at that level," said Sternberg.

He said regulators don’t have the tools to adequately detect any harmful compounds and advised people to take precautions 30 miles downwind from the refinery and to avoid growing gardens this year.

However, Douglas County officials have said planting gardens and working with the soil is safe, but they advised using gloves and thoroughly washing food. Lorena Rios, an associate chemistry professor at the University of Wisconsin-Superior, said at Wednesday’s meeting she plans to collect soil samples for future testing.

Ginger Juel, of Duluth, said her family has a cabin downwind from the refinery. She feels there’s a lack of public oversight on air, water and soil quality tests.

"I don’t have a lot of trust from the regulatory agencies here or the mayor for that matter," Juel said. She added that officials are telling people everything is fine while tests are ongoing.

Connie Antonuk with the Wisconsin Department of Natural Resources said there have been no impacts to Superior’s drinking water to date. She said the state is asking for additional test samples for bacteria and volatile organic compounds, the results of which will be shared on the Douglas County website.

In an email Thursday, a spokesman for the DNR said they’re ensuring the quality of data that’s being monitored.

"Through our state oversight we believe the company and its consultants are doing the testing properly and according to protocol/state standards, and we will continue to monitor the process to ensure accurate sampling and test results," the agency said.

Superior Mayor Jim Paine said at Monday’s meeting all the evidence they have available at this time shows people are not in any danger. He also noted it's his job to represent the people.

"To take your questions, to try and get answers for you to speak on your behalf whether it’s to you, to the press or other government agencies," said Paine.

"We need to do the best job we can to answer people’s questions so they have the best information available," said Milroy.

"They need to know not only what those numbers are, but what do the numbers mean and what are the changes over time," said Bewley.

Husky’s Guttormson said they’re doing everything they can to address people’s concerns and process the roughly 2,500 claims that have been submitted, about 60 percent of which have been resolved. The company plans to hold an open house with community members in the coming weeks, but a date has not yet been finalized.