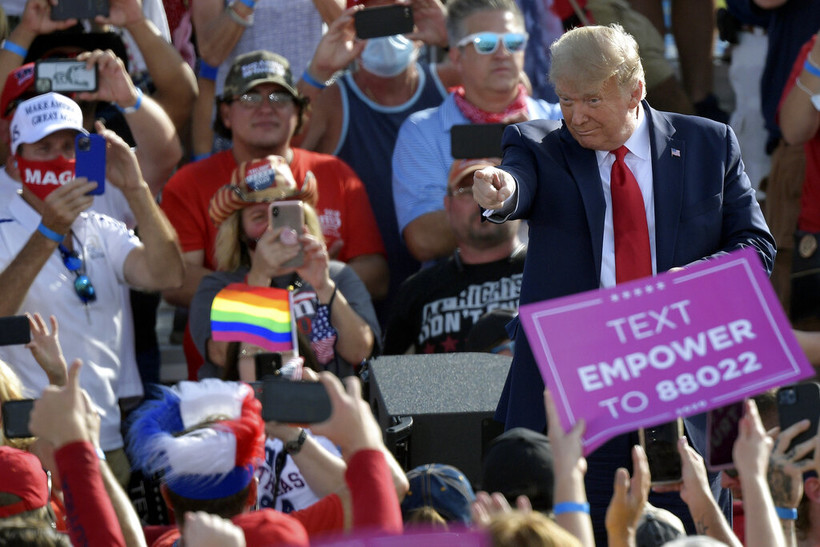 Trump To Rally In Janesville As Pandemic Worsens In Wisconsin

Saturday's Campaign Event Comes After Trump Canceled Oct. 2 Rallies Due To His Own COVID-19 Diagnosis
By Rob Mentzer
Updated:
Saturday, October 17, 2020, 10:25am
Share:

President Donald Trump's campaign rally in Janesville on Saturday comes as the pandemic is at its worst point in Wisconsin.

The 6 p.m. event at the Southern Wisconsin Regional Airport will be the sixth visit that Trump has made to Wisconsin in 2020. It comes two weeks after he canceled two rallies in Wisconsin, planned for Janesville and Green Bay, when he contracted COVID-19 and was subsequently hospitalized.

On Monday, Trump returned to the campaign trail in Florida and he's since held events in Iowa, North Carolina and Georgia. But none of those states is experiencing the rapid increase in new coronavirus cases that Wisconsin is. In the last week, the state has repeatedly broken its own records for new cases and hospitalizations from the disease. On Tuesday, it recorded 34 deaths, the most ever in a single day.

According to data from the Rock County Health Department, active cases there have increased by 48 percent in the last week, from 693 on Oct. 9 to 1,030 on Thursday. Over the last two weeks, about 22 percent of the county’s tests have been positive. Health experts have said it isn't safe for businesses to be open if positivity rates are higher than 5 percent. Rock County Health Department's website, mirroring guidance from the Centers for Disease Control and Prevention and other agencies, classified "attending a large music concert," "going to a sports stadium" and "attending a religious service with 500-plus worshipers" as high-risk activities. Trump rallies typically draw thousands of attendees, with no social distancing.

The Janesville Gazette reported that those attending the rally won't be able to park at the airport, but instead will park at Blackhawk Technical College, several miles away from the site of the rally. They will take shuttle buses to the airport, creating additional infection risks as attendees may be put in close contact in an enclosed space.

In a statement, Trump's Democratic opponent, former Vice President Joe Biden, said Trump is "knowingly downplaying the severity of the virus. At virtually every turn, he has panicked and tried to wish it away, rather than doing the hard work to get it under control. ... My administration will trust the science, lead by example, speak the truth to the American people, and help Wisconsin families and small businesses build back better than before."

Ahead of planned rallies two weeks ago, elected officials and a liberal doctors group called on the president to cancel his Wisconsin visits to help reinforce public health officials’ calls to Wisconsinites to stay home. On Friday, Dr. Ann Helms, of the Committee to Protect Medicare, said holding a rally in Wisconsin was irresponsible, and that Trump's rhetoric about his own illness was unfeeling.

"President Trump tells people not to be afraid of COVID-19, but he hasn't looked into the terrified eyes of our patients who can’t breathe," Helms said.

In a video Trump made shortly after his hospital stay, he told Americans not to let the coronavirus "dominate your life."

Polls show Trump trailing in Wisconsin, which is regarded as a key swing state in the presidential race. Trump narrowly won the state in 2016, but he lost Rock County, which voted for Democrat Hillary Clinton by a margin of 52 percent to Trump’s 41 percent.