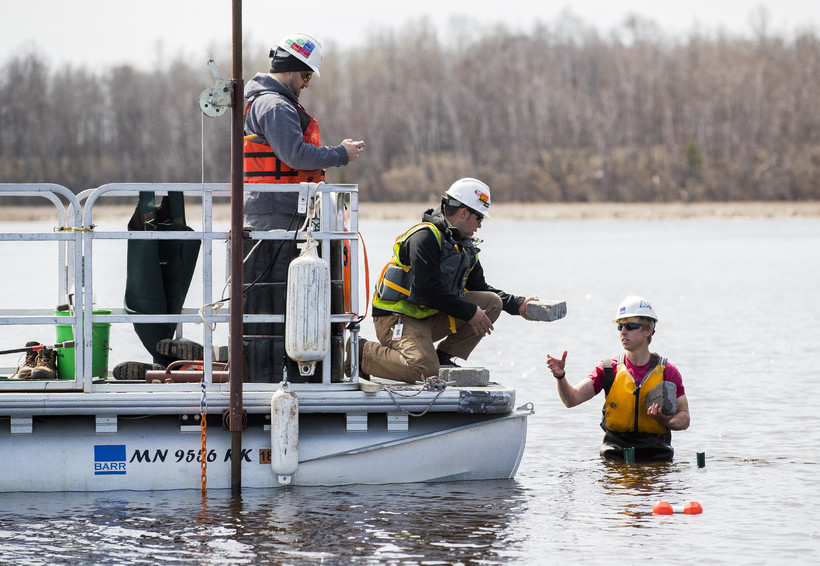 Working for U.S. Steel, employees from Barr Engineering install instruments that measure groundwater seepage and flow between the sediments and St. Louis River.

Long-standing plans to clean up the headwaters of Lake Superior have been thrown into doubt by Trump administration budget priorities. Now, Minnesotans are wondering how to fill a multimillion-dollar hole.

Federal officials have been working for years to address a century's worth of industrial pollution in more than 40 areas around the Great Lakes.

The St. Louis River estuary, which flows past Duluth, Minnesota, into Lake Superior, is the second largest of those projects. But the money has been zeroed out in the president's 2018 budget plan.

One hundred years ago U.S. Steel built a massive mill along the banks of the St. Louis River, about 10 miles southwest of downtown Duluth. It even built an entire neighborhood to house the workers — dubbed Morgan Park, after J.P. Morgan.

For decades the plant provided great jobs. But along with logging mills and other industry that once lined the river, it also left behind a legacy of pollution. "They pumped all their sludge and stuff from the coke ovens," says Rob Maas, as he steers his fishing boat upriver to the site of the old Duluth Works.

Maas worked there a half-century ago, making barbed wire that was shipped to Vietnam. He raised his kids just blocks from the river.

"I used to come down here and fish with them off the point just to catch fish, but … if you cooked them, your house stunk," he recalled. "They just smelled terrible. You could tell they weren’t healthy or clean."

Since then the river has made a remarkable comeback. Water quality improved tremendously in the 1980s after a sewage treatment plant went online.

Maas, who's 71 and retired, said he fishes the river more than 200 days a year. He's even able to eat much of what he catches.

But toxic contaminants still remain trapped in the river's sediment.

"And so this whole delta area is contaminated sediment," said Mike Bares of the Minnesota Pollution Control Agency, pointing out where the steel mill once stood.

One of the byproducts of steelmaking was coal tar, which washed into the river.

"And it’s up to 17 feet thick in some places. … Of contaminated sediment," Bares said.

"It’s really hard to see contamination that’s under the water, but this is what it’s all about," Bares said. "It’s the aquatic ecosystem, and it really is causing some major issues."

Bares said the pollution kills microscopic critters living in that muck that form the base of the food chain. Clean that up, and all the bigger fish and wildlife can thrive.

That prospect has Maas excited. "Because I use it. I use it every day.

"I have people who come and fish with me from California, Las Vegas, Florida — all over the country. And they can’t believe, when you’re out here, you don’t even know you’re by a city." It's taken several years, but state regulators, the U.S. Environmental Protection Agency and U.S. Steel have finalized a plan to clean up the sediment.

It calls for the EPA to cover a little over half of the $69 million price tag, with U.S. Steel picking up the rest.

But now the cleanup work is in jeopardy. President Trump's proposed budget to Congress calls for cutting the $300 million Great Lakes Restoration Initiative.

Dredging and capping the U.S. Steel pollution is just one part of a broader plan to clean up the entire St. Louis River estuary by 2020.

Nelson French of the Minnesota Pollution Control Agency said the plan has been 30 years in the making, but relies on federal dollars to leverage state and private funding.

"We’re just at a juncture where the feasibility studies have been done, the designs are about to start, and we now have this uncertainty thrown at us," French said

If funding comes through, work on the U.S. Steel project is scheduled to begin next fall, according to the EPA.

And the city of Duluth is banking on it. It has ambitious plans to revitalize the riverfront to spark neighborhood and economic development.

Duluth's Director of Public Administration Jim Filby Williams said that's dependent on the river first getting cleaned up. "The foundation of all we hope to achieve for our community along the river is completed restoration of the river."

A restoration that's now in doubt.

GLRI projects
Create your own infographics

Editor's Note: Dan Kraker is a reporter for Minnesota Public Radio. This story is part of a series from Great Lakes Today, which is funded through a grant from the Corporation for Public Broadcasting.