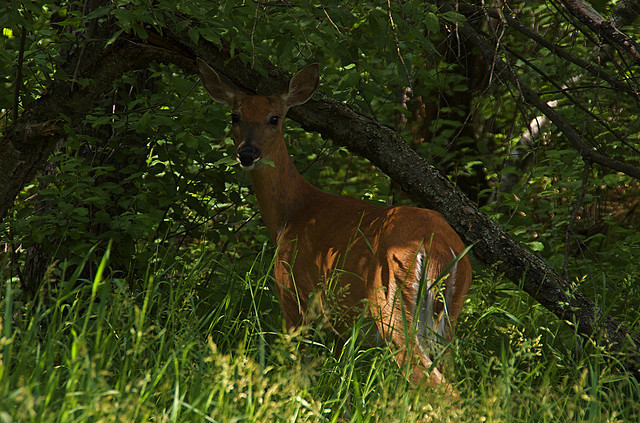 Some Native Americans want to begin off-reservation hunting of deer at night, in a large section of Northern Wisconsin. The state wants a federal court to block the plan.

The recently-started wolf hunting season in northern Wisconsin allows shooting at night. That's disappointed the Great Lakes Indian Fish and Wildlife Commission, or GLIFWC. But the agency says the wolf hunting law should then open the door to the state's Chippewa tribes being able to hunt deer at night off-reservation, in the ceded territory of the North. The nighttime deer hunt could begin next Monday night, after the state's gun deer season is over. But DNR attorney Quinn Williams says nighttime deer hunting would be unsafe.

Furthermore, Williams says the DNR doesn't think that GLIFWC has the legal authority to authorize nighttime deer hunting off-reservation. He says federal judge Barbara Crabb ruled on the issue more than 20 years ago, when tribes said a state law allowing shining of coyotes at night should allow deer shining, too.

GLIFWC spokeswoman Susan Erickson says the tribes are not asking for shining, rather the use of light at the point-of-kill. In an email to WPR Erickson says, "Essentially they are asking for the same regs as the wolf hunters have - at the same time and in the same manner."

Attorney Quinn Williams says the DNR hopes now-reserve judge Crabb will hear the state's new lawsuit, which asks that the DNR be able to enforce a state prohibition on off-reservation deer shining. It's unclear if that hearing will be held prior to Monday night.