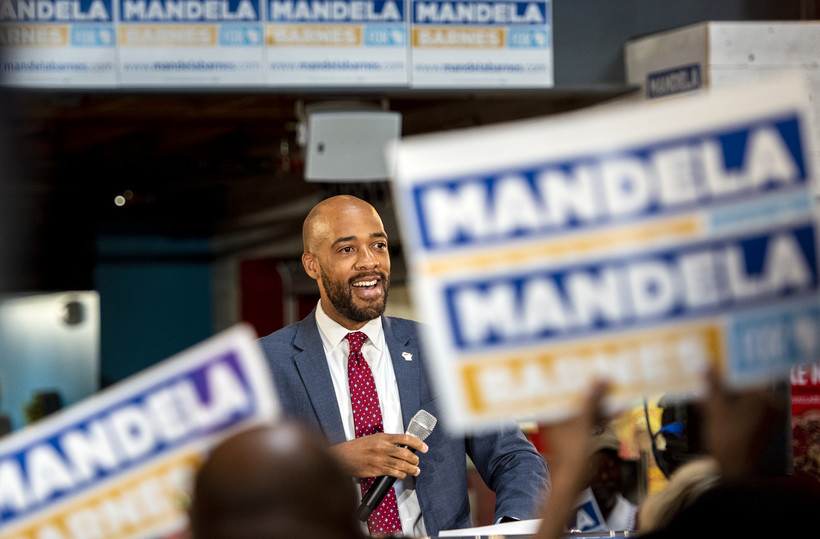 Frontrunning candidates in the Democratic Senate primary made their cases against Republican U.S. Sen. Ron Johnson on voting rights and other topics in a virtual forum Thursday.

With a rule in place preventing candidates from engaging with, addressing or referring to one another, the candidates largely focused their attacks on Johnson.

"While Ron Johnson wants to divide us, the thing he doesn't understand is we all have so much more in common with each other than any of us do with a self-serving, out-of-touch multimillionaire like him," Barnes said.

Godlewski said eliminating the filibuster was the first step to expanding voting rights.

Lasry called voting rights "one of the defining issues of our generation." Barnes, meanwhile, said the issue has continued to become more urgent. He called for the expansion of mail voting and same-day voter registration.

"Our democracy is still on the line," Barnes said. "We have to protect the right to vote with everything we have."

Candidates in the forum were asked how they would work to combat right-wing extremism, white supremacy and antisemitism. An audit from the Anti-Defamation League earlier this year found antisemitic incidents in the United States reached record levels in 2021.

"We absolutely have to fight antisemitism with everything we have, we have to call it out when we see it forcefully, and we have to crack down on disinformation," Barnes said.

Lasry brought up bipartisan legislation Gov. Tony Evers signed last year that requires schools to provide education on the Holocaust and other genocides.

"Education is going to be one of the most important things we can do to ensure that we don't see what happened in the past," Lasry said. "I think this is an incredibly serious and sensitive issue."

Godlewski called the increase in violence and antisemitic actions "horrifying."

"There is, let me be clear, no room for hate in this country," Godlewski said. "We need to be able to fund these nonprofit organizations that are working diligently to develop leaders in our communities that are fighting this hate, and are working to kind of train the next generation."

Nelson said antisemitism and other interrelated issues need to be identified quickly, emphasizing his support for enforcing hate crime laws.

"Antisemitism has been here for a long time," Nelson said. "We have to recognize that this is not something that is unfortunately new, and that we can learn from history and know that it is absolutely urgent that we take action on it."

Democrats in Wisconsin have long argued for expanding Medicaid access, something the GOP-controlled Legislature has blocked. The Democratic candidates in Thursday's forum focused on ways of making health care more affordable to Wisconsinites and all Americans. Johnson has repeatedly voted to repeal the Affordable Care Act created under former President Barack Obama. Johnson said earlier this year Republicans should be ready to repeal and replace it if they win the presidency and Congress in 2024.

Lasry said health care "should be a universal right for everyone." He advocated for the availability of a "public option."

"It's not just a moral issue, it's also an economic issue," Lasry said. The lack of universal health care in the U.S., he said, "makes it really hard for us to spur innovation."

Barnes said he supports Medicare for All, in addition to intermediate options such as lowering the eligibility age for Medicare.

Nelson said Medicare for All would take care of many of the issues Americans face in the health care system.

"One half of county expenditures are focused on health and human services," Nelson said. "If everyone had access to health coverage ahead of time, it would take a lot of pressure off of those services, and with … more and more cuts from the federal government and less support from the state, we are seeing that we need to conserve these resources."

"I remember a time in my 20s where I used to say my car has better health insurance than I do, and I don't want to go back to those days," Godlewski said.

A significant chunk of voters remain undecided, however. The poll found 36 percent of respondents said they haven’t made a decision.