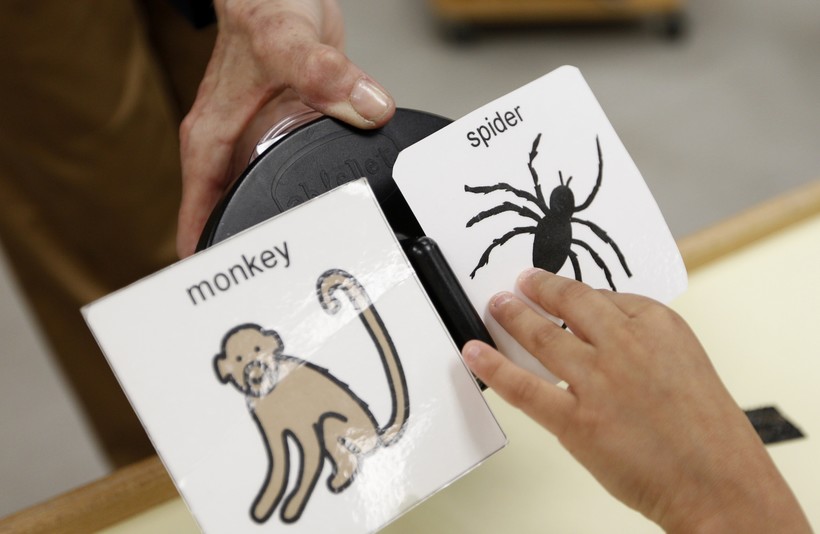 In this April 3, 2012, photo, teacher Bev Campbell holds up images of animals and insects for identification by students in her special education class at Amelia Earhart Elementary School in Hialeah, Fla. Lynne Sladky/AP Photo

That's a giant increase to the current base funding for special education which is less than $369 million.

The state funds special education through a reimbursement method, and according to DPI, reimbursement rates in Wisconsin have not kept up with inflation or demand.

DPI and public education advocates argue local school districts have had to make cuts elsewhere in their budgets in order to meet the needs of students with disabilities.

"As districts are forced to dip into their own general funds to cover the special ed costs that aren’t covered by state or federal reimbursement, they’re having to take it away from other kinds of programming," DuBois Bourenane told WPR.

Still, Tom McCarthy, spokesman for DPI said the department is optimistic about the request, partly because the landscape for how people want to see special education treated is becoming part of the public discussion.

According to the department, Evers will be rolling out four major budget requests this year. Special education funding is his second. The first was a request looking for $60 million for mental health resources in schools, which among other programs would help pay for pupil services staff and parent peer specialists.

As Gov. Scott Walker seeks re-election, he’s been campaigning as an "education governor" because of the additional funding he’s set aside for public schools and technical colleges.

But critics, including Evers, have argued previous budgets have not made education a funding priority.