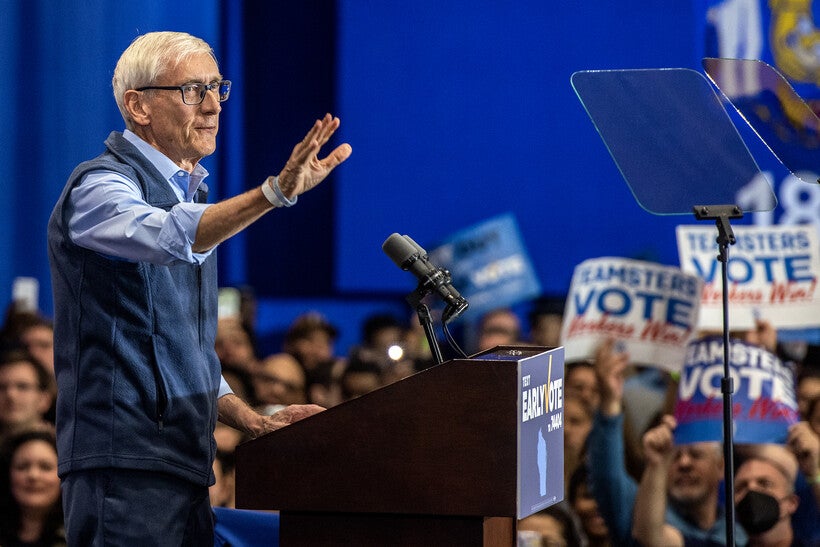 Evers campaign is criticizing transfers from GOP after donations from Michels' family
By Sarah Lehr
Share:

Democratic incumbent Gov. Tony Evers is continuing to outraise and outspend his Republican challenger Tim Michels ahead of the Nov. 8 election, according the latest campaign finance reports filed by each candidate's committee.

Evers, who got an early start on fundraising and had money in his account at the start of the year, has raised nearly $27.7 million so far this year and spent close to $37 million. Michels, a construction executive whose family owns Michels Corporation, took in about $25 million total and has spent nearly $24.5 million so far in 2022, according to a pre-election campaign finance report.

Much of Michels' bid has been self-financed — he's contributed nearly $19 million to his own campaign, disclosure reports show.

But donations from Michels' close family members are drawing criticism from the Evers' campaign.

Michels' brothers Patrick and Kevin Michels, both of whom are executives at the Michels Corporation, gave a total of $1.5 million to the Republican Party of Wisconsin on Sept. 28. That includes $1 million from Patrick and $500,000 from Kevin. The next day, the state GOP gave $800,000 to Michels' campaign followed by another transfer of $600,000 into the Michels' committee a week later on Oct 6. The transfers were first reported by WisPolitics.com.

Although individual donors may only give up to $20,000 to a candidate's campaign finance committee, political parties in Wisconsin can accept unlimited contributions.

Sam Roecker, a spokesperson for the Evers campaign, said the transfers cast doubt on whether Michels can truly cut financial ties from his family's business if he's elected. The Republican hopeful has pledged to divest from the Michels Corporation, a company that's received major state contracts in the past.

"I think there are a number of ethical and legal questions that Michaels has refused to answer throughout this campaign," Roecker said. "There's really no way for him to divest himself and take him out of that equation when the governor in Wisconsin is responsible for signing new road contracts."

The Michels campaign did not immediately respond to a request for comment.

In all, Michels' committee got close to $3.3 million from the Wisconsin Republican Party over the latest seven-week reporting period. That includes over $2 million in monetary donations plus $1.2 million in contributions of goods or services, known as in-kind donations. Patrick and Kevin Michels also contributed to the Michels' campaign directly, having given the maximum amount of $20,000 each in September.

The Democratic Party of Wisconsin, Evers' largest donor, has given $11.3 million in total cash and in-kind donations to the governor's reelection campaign so far this year.

The latest reports, which were due Monday to the Wisconsin Elections Committee, only track fundraising and spending done through candidates' campaign committees. They don't include spending by outside groups, like political parties or super PACs, on the race.