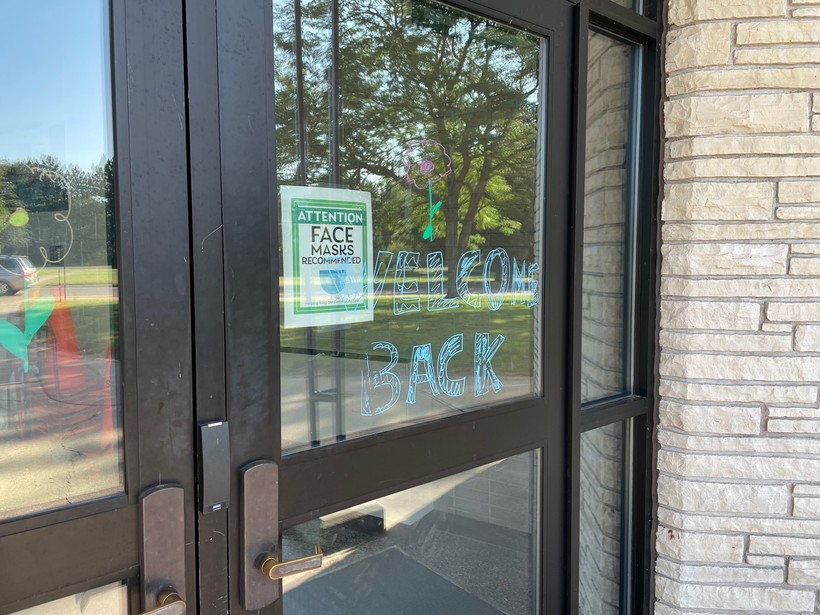 A sign reading "face masks recommended" is posted on a door at the Tomahawk school complex, which also bears a "Welcome Back" message to students. Rob Mentzer/WPR

Less than a week before school started, parents in the Tomahawk School District got a letter.

"The purpose of this communication is to inform you that all students and staff ... will be required to wear a face covering" inside school buildings, it said. "We believe that (this) mitigation tactic as we return to school provides the best chance of maintaining in-person learning five days a week for the highest number of students."

The Aug. 26 letter was signed by district administrator Terry Reynolds. Two days later, Reynolds had resigned from his position and the Tomahawk School Board had reversed course, making masks optional for all students.

Reynolds' resignation hasn't been enough to stop an effort by district parents to recall six school board members they say were too supportive of public health restrictions. It's the latest example of how efforts to control the spread of COVID-19 in schools have become the focus of heated public debates and local activism by parents.

In Tomahawk, the tension over the issue was months old. The northern Lincoln County city is home to about 3,000 people, and the school district also includes rural communities in Lincoln and Oneida counties. About 1,150 students and close to 200 staff members attend Tomahawk's elementary, middle and high schools, which are all housed in a single building just off the Wisconsin River.

Some parents opposed a mask mandate during the 2020-21 school year, but district officials said parent surveys showed a majority supported it. After the Wisconsin Supreme Court struck down the statewide mask mandate in March, parents and students called for the district to end its mask requirement, too. In May, a group of students walked out of class to protest the policy, leading to threats from the school administration to charge them with truancy.

"It flared a lot of tempers that we decided to continue" the mask policy, said Kay Kissinger Wolf, the school board president.

But as COVID-19 cases declined in Wisconsin, the board voted to make masks optional for summer school. Kissinger Wolf, a nurse who has lived in Tomahawk for 45 years, said her personal view is that teachers and younger students who aren't yet eligible for the vaccine ought to wear masks at school. She has had parents in the community thank her for promoting masks in schools, but she has also been the target of a huge amount of vitriol. 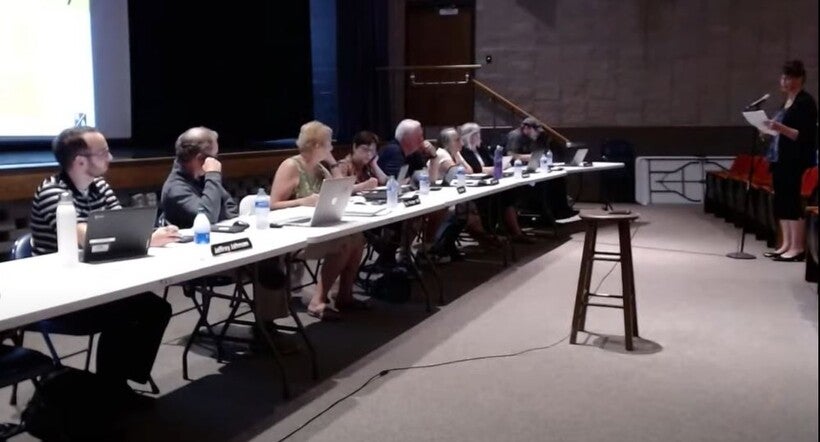 Public anger at COVID-19 mitigation measures in schools boiled over during an Aug. 10 meeting of the Tomahawk School Board. Screenshot

Despite the board's move to make masks optional, at an Aug. 10 school board meeting, one parent presented a petition she said was signed by more than 700 people in the district who opposed not just mask mandates but also "mandatory COVID testing in school" and having the school "being used for any COVID vaccine propaganda and/or COVID vaccine clinics for students." Another speaker said there was "overwhelming evidence" that the community opposed "our school being an arm of the health departments or the CDC."

In reality, the population is close to evenly divided, at least when it comes to getting the vaccine. According to state data, as of Wednesday, about 49 percent of Lincoln County residents have received at least one dose of COVID-19 vaccine.

Wolf has been on the school board for 13 years. She said it has been years since any of the board's seats were contested in a spring election. The district, which has seen enrollment decline in the last five years, has faced financial shortfalls. Those troubles were made worse after spending referendums were defeated in November by 51 votes and in April by 34 votes.

The pandemic, she said, has only made it harder to explain the district's needs to the public.

"This last year, with COVID, it's been hard to relate to one another," she said.

Conservative Parents Are Launching School Board Recall Efforts Across The State

Tomahawk isn't the only place in Wisconsin where school boards have become the focus of public debate.

A campaign to recall a Waupaca School Board member this month fell short of the required number of signatures; a parent launched the effort after board member Pat Phair cursed during a public debate at which he advocated for a mask requirement. Those opposed to mask requirements are attempting to recall school board members in Stevens Point and Wisconsin Rapids. In suburban Milwaukee, organizers in late August turned in signatures they said would be enough to force recall elections for most of the Mequon-Thiensville School District. All of those efforts came after parents in the districts opposed mask policies or other COVID-19 mitigation measures those districts took.

Nationally, some efforts to change the makeup of school boards have been supported by "a loose network of conservative groups with ties to major Republican donors and party-aligned think tanks," the Associated Press reported. But it's clear from Tomahawk that there is plenty of organic anger in some communities, too. 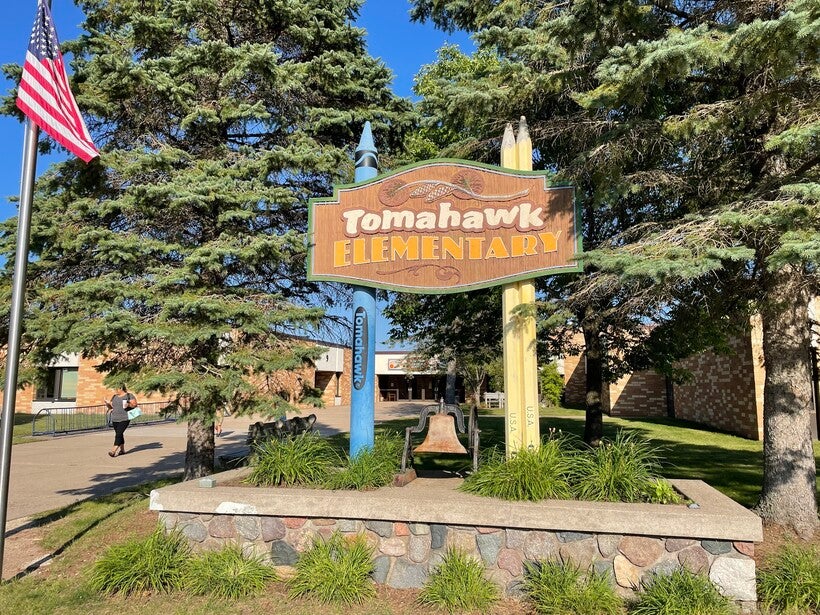 The anti-mask demonstrations in Tomahawk were protesting "a) for their freedoms, and b) for parents to make the medical decisions for their children," said Jodi Hoban, a parent in the Tomahawk district and a leader of the effort to recall school board members.

Hoban, whose 15-year-old daughter participated in one of the student walk-outs in May, said she objects to limiting the choices that parents and students can make, even if that means increasing the ability of COVID-19 to spread in schools. The 43-year-old is skeptical of the vaccine and said she supports her elderly father's decision not to get vaccinated or take other mitigation measures. She also doesn't wear a mask.

"Sometimes people get sick and they die, and some people will survive," she said. "Now, I feel bad for those people who can't survive COVID because their immune systems are compromised. But on the same token, I look back at what my second grade science teacher taught me: Everything is part of evolution."

Hoban hasn't been involved in local or party politics before, but she now said she's willing to run for school board herself and has other potential candidates lined up if she's able to gather the roughly 1,300 signatures needed to trigger recall elections for six of the school board's nine members.

"And if the recall doesn't succeed," she said, "there's always April elections."

She said the recall effort isn't just about the school's COVID-19 policies. She cites the failed referendums as evidence that the community lacks trust in the district's leadership. She claims Reynolds broke the law by referring students for truancy offenses in May. And she said fixing the district's crumbling infrastructure is a major community priority.

Reynolds declined an interview request from WPR. In a brief emailed statement, he said, "I believe that it is always best to leave well, and at one's own personal choice and terms, which I did."

Wolf confirmed Reynolds' resignation was voluntary. She declined to share details of the board's closed-session discussion.

But residents say it's not hard to connect the dots.

Reynolds, who had been Tomahawk administrator since 2015, had previously said he would retire at the end of the school year. The school board announced what they referred to as his "immediate voluntary retirement" in the same letter to parents that announced the board's unanimous decision to overturn the mask requirement Reynolds had favored.

His letter to parents came as new COVID-19 cases were rising sharply across the state, prompting large school districts including Appleton and Green Bay and smaller ones including Marshfield and Wisconsin Rapids to require masks for students. But it also amounted to a unilateral action by Reynolds. He sent the Aug. 26 letter to parents after reaching out to Wolf but before hearing back from her.

As of Wednesday afternoon, Lincoln County has "very high" COVID-19 case activity, according to state data. According to the Wisconsin Hospital Association, as of Wednesday, the 17 hospitals in the north-central region of the state had a total of three ICU beds available and no available room for intermediate care.

Across Wisconsin, some parents have spent the first weeks of school nervously watching for announcements of new positive cases near their children. The Tomahawk School District has set up a "COVID-19 Updates and Information" page on its website. The site doesn't list any information about positive cases in the district.