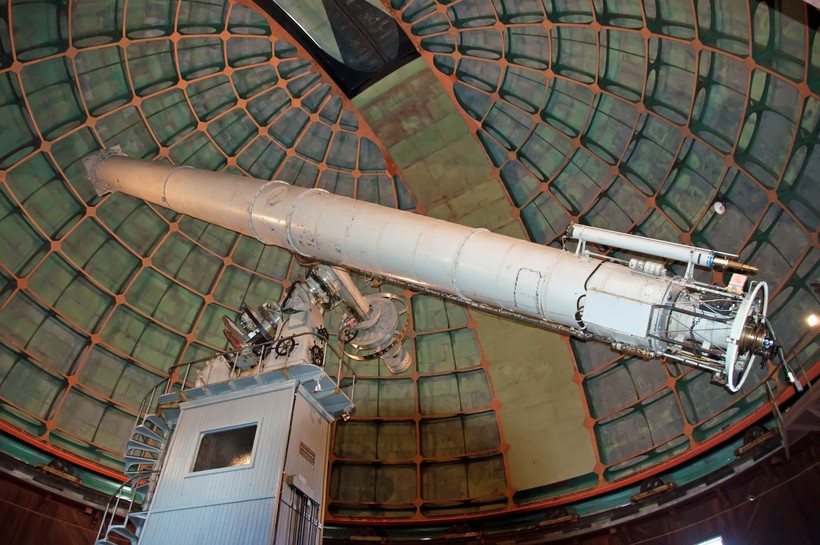 The Yerkes Observatory's 40-inch telescope was the largest refracting telescope ever built. The University of Chicago no longer uses the observatory for teaching and research, and is selling the 77-acre facility. John 'K' (CC BY-NC-ND)

Officials Hope To Reopen The Observatory To The Public In The Summer
By Alana Watson
Share:

The birthplace of modern astrophysics and the largest refracting telescope in the world is set to reopen in Wisconsin under new ownership after being closed since 2018.

The University of Chicago donated the Yerkes Observatory to a foundation dedicated to preserving the facility.

The Yerkes Future Foundation took over ownership of the observatory and roughly 50 acres of surrounding land on Friday, May 1. It was previously owned by the University of Chicago’s Department of Astronomy and Astrophysics. The university opened the observatory in 1897 and closed it to the public on Oct. 1, 2018.

David Fithian, executive vice president of  the University of Chicago, said in a press release that the Yerkes Future Foundation will provide an appropriate new chapter for the observatory.

"We are delighted that this process is concluding in a way the brings long-term benefits to the Williams Bay community and future visitors to Yerkes, while serving the future of astronomy and astrophysics research and education at the University of Chicago," Fithian said in a statement.

The observatory has been in its current location since the late 1800’s according to Dianna Colman, president of the Yerkes Future Foundation.

Well-known scientist and astronomers have spent time in the observatory such as, Otto Struve, Edwin Hubble, Carl Sagan and Albert Einstein.

Colman told WPR that the foundation’s next steps are assessing the building and the grounds to pinpoint what needs to be repaired, refurnished and landscaped.

The retractable telescope sits close to Lake Geneva and the 40-inch telescope is able to focus on various objects in the sky because of its movable floor.

The foundation is also starting the process of hiring an executive director and sending invitations to different colleges, universities, scientists and astronomers to collaborate and visit once the space is ready for visitors.

"Today’s a big day," Colman said. "It really is because it marks a shift not only from the amazing work that the University of Chicago did for so many years, but it marks a shift truly bring home the observatory to Wisconsin."

The foundation is still waiting on permits from the Village of Williams Bay where the observatory is located.

One permit would allow them to create additional parking spaces on the property and another would allow mixed-use of onsite buildings for different events and research.

Williams Bay officials have to meet and approve certain permits before the observatory can be open for visitors. Village president William Duncan said he hopes to start having those meetings toward the end of May.

Duncan told WPR he’s relieved and is excited for the foundation to bring education and outreach opportunities to Williams Bay.

"People are ecstatic," Duncan said. "Long term residents and others are just very, very pleased that the main observatory and about 49 to 50 acres of the land around it will be shifting to the Yerkes Future Foundation."

There is no officially opening date for the observatory. The COVID-19 pandemic has delayed the process, but the hope is it will open sometime this fall.

"It’s got a huge history and a great reference point for so many different people who’ve been through there. It’s just a very, very special place," Colman said.