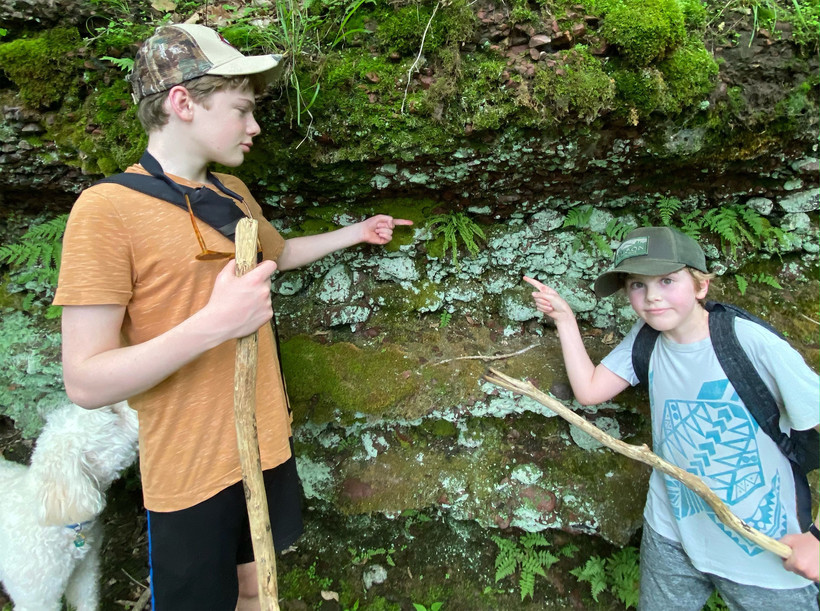 Rare Plant Monitoring Program volunteer Ben Redding went hiking at a state natural area in Sauk County last summer and rediscovered a population of the rare maidenhair spleenwort not seen at the site in 90 years. Photo courtesy of Ben Redding

Rare fern population not seen in 90 years spotted by citizen scientist and his sons in Sauk County last summer
By Diane Bezucha
Share:

Monona resident Ben Redding was hiking with his two kids and their dog in Sauk County last summer when they spotted something unusual.

"We were checking out some cool rock formations, and we were just walking along a little deer path, and I looked along the rock ledge and I noticed this tiny fern," Redding said.

He thought it looked like something he’d seen in his fern book — a cliff-dwelling fern called maidenhair spleenwort.

Unlike some ferns which grow from the ground, this variety grows out of rock faces.

"It’s got like a black stem ... and these little leaves on it. And I know it kinda grows on vertical rocks," Redding’s 14-year-old son Miles said.

As a volunteer with the Wisconsin Department of Natural Resources’ Rare Plant Monitoring Program, Redding is used to identifying unusual plants, so he snapped a few photos and shared them with program coordinator Kevin Doyle.

But it wasn’t until they were back home that they learned their little fern was a big find.

While populations of maidenhair spleenwort are scattered throughout the state, including in north-central Wisconsin, Door County and the Wisconsin Dells, none have been seen in this exact location for 90 years.

"We were pretty excited," Redding said. 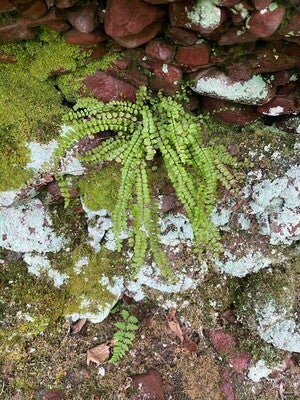 Maidenhair spleenwort is a rare native fern that usually grows on vertical rock faces. This particular population in Sauk County has not been seen in 90 years. Photo courtesy of Ben Redding

An 'army' of plant volunteers

The maidenhair spleenwort is one of more than 300 rare plant species monitored through a citizen science program managed by the DNR since 2013.

The DNR’s Bureau of Natural Heritage Conservation maintains a database of rare plant (and animal) populations, tracking trends in population size, habitat condition and threats. The bureau does some of their own surveys, but has limited capacity, so it relies on nearly 70 volunteers like Redding to monitor about 5,000 known rare plant populations throughout the state.

Redding joined the program during the pandemic when he and his family were looking for a way to stay active and started frequenting state county parks and natural areas.

"That kind of opened up a whole new world of exploration for us," Redding said. "It's been really fulfilling because not only do we get to look for cool plants, but that takes us to places that we wouldn't normally think to go explore."

Now Redding and his sons Miles and Wes, 10, go on regular weekend "adventures" looking for plants like twinleaf and putty root.

Kevin Doyle, a DNR botanist who coordinates the rare plant monitoring program, said volunteer-collected data has been incredibly valuable to conservation efforts, especially with the ability to use smartphone GPS to pinpoint locations.

"We have a really precise understanding of how many plants were there, what the threats are to the population, what the habitat is — all this great information that we're able to capture because we have this army of volunteers that are going out and keeping an eye on these things for the DNR, but really for the conservation community at large," Doyle said.

After completing an online training and signing a confidentiality agreement, volunteers choose a plant population (species and location) they feel comfortable monitoring and Doyle sends them the details of what to look for.

Volunteers visit their site(s) and complete at least one population assessment each year, providing data on:

Doyle said volunteers can submit all the data, including a picture and GPS coordinates, from their smartphone while they’re in the field.

"Without checking in on these things, we don't know what's in trouble," Doyle said. "And so these volunteers do that sort of foundational work to go out and just collect data on how big the population is, where is it, is it increasing or decreasing, what are the threats?"

But the news is not always good. Last year there were 64 previously documented populations that volunteers were not able to find.

The DNR uses all of this data to assess the status of populations and plan appropriate research and conservation actions. This includes everything from habitat restoration to hand-pollinating genetically isolated species such as the eastern prairie fringed orchid.

And Doyle said many volunteers have become invested in not only finding rare plants but assisting with efforts to conserve them. He mentioned one volunteer who went out looking for a rare plant, couldn’t find it and noticed how degraded the habitat had become.

"So she contacted the property manager, and now she's a volunteer steward out there cutting brush and restoring the wetland where the rare plant was (originally) found," Doyle said. "Hopefully as the habitat improves, the plant could come back."

He added: "It's cool to see (volunteers) involved in both sides of it."

Part of what makes the monitoring program so fascinating for Redding is the highly specific micro habitats of many of these rare plants.

The area where he found the fern seemed like an ideal habitat that should have been brimming with them, But Redding said they searched for hours and only found one population.

"It's one crack in one rock wall and that's where the entire population is," Redding said.

But these highly specific habitats are also what leaves some plants imperiled.

"If a plant is kind of scattered all over the state, it's buffered from any one particular threat," Doyle said. "Whereas a plant that is only limited to one specific spot is a little more vulnerable to one specific, catastrophic event, like a tornado or a flood."

This is why having a crew of willing volunteers regularly monitoring plant populations is so important.

"It raises awareness about the importance of habitat preservation and all the different types of niche habitats that there are around us in Wisconsin," Redding said.

For Redding and his family, it also provides an opportunity to explore and enjoy the peace and solitude of nature. One of their favorite places is Pine Hollow State Natural Area.

And they're not always looking just for plants.

Wes added: "Yeah, sometimes there’s, like, bones in them."

Their recommendations to other adventurers in search of caves are to look closely at cliff faces and follow bobcat trails.

Whatever you might be looking for, Redding just encourages people to get outdoors.

"There are so many places within an hour of Madison or within an hour of anywhere in Wisconsin, to go out and explore — places that practically no one has heard of, but they're not that hard to find," Redding said. "Get out and check out all the public lands in Wisconsin because there are amazing things to see."