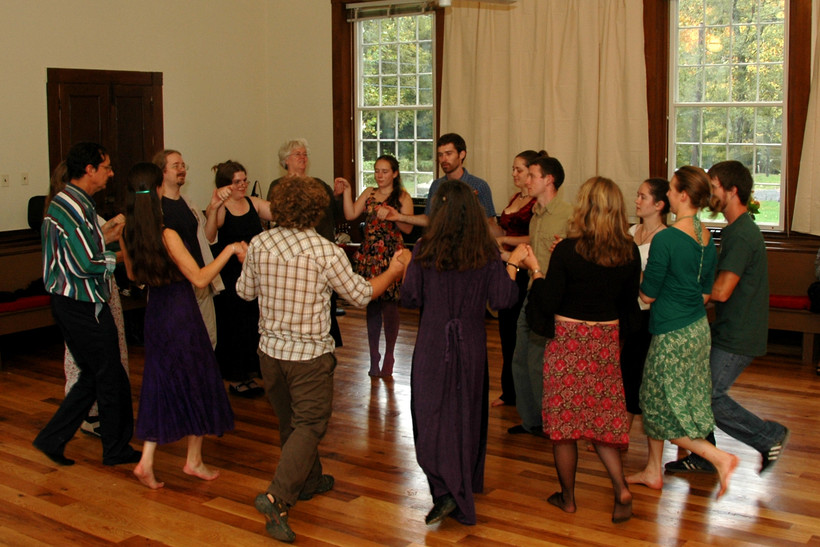 In The Time Of The Coronavirus, Music Can Unite Us In Life And In Death

'Will The Circle Be Unbroken' Keeps Us All Together
By Dan Robinson
Share:

When I was a child, we would celebrate Memorial Day with a service at the local cemetery for veterans who had died, including my grandpa. I don’t know that it never rained, but my memories are filled with sunny days with a little breeze, and the first warmth that hinted at summer.

Those memories are also filled not only with the decorated graves of the veterans but all the graves in our small town’s cemetery. That weekend, people made sure the resting places for their loved ones were tidy and filled with flowers.

While I know that Memorial Day is traditionally a day to remember all the veterans who have died, I also think of it as a day to remember all who have died, in war and in peace, those we know and those we don’t. That seems especially important now as we face the effects of a pandemic that has killed tens of thousands of Americans and hundreds of thousands of people around the world.

Those staggering numbers are filled with the individual stories of people who are mourned by their loved ones, who in turn are looking for solace. Music in general, and folk music in particular, can offer solace and comfort. One of the best examples is the song, "Will the Circle Be Unbroken."

Originally a hymn, A.P. Carter brought the song to his wife Sara and her sister Maybelle, the original Carter Family, and they reworked it a bit and recorded it as "Can the Circle Be Unbroken." It was a hit for the Carters, the first family of roots and country music, in 1935, and has become a staple of the country music repertoire, including at the Grand Old Opry in Nashville. Here’s a 1927 recording of the Carters singing the song.

The song’s verses tell the sad tale of children who are mourning the death of their mother, even as she is taken away by the undertaker. But more often, the song’s performers and the listeners focus on the words of the chorus:

Will the circle be unbroken,
By and by, Lord, by and by?
There’s a better home a waitin’
In the sky Lord, in the sky.

That certainly is the spirit of the song during its most iconic performance, as part of the Nitty Gritty Dirt Band’s seminal album by the same name, "Will the Circle Be Unbroken," recorded with Mother Maybelle Carter and a host of country music stars in 1972:

The song has become so well-known and beloved that NPR focused on it as part of its series, American Anthem: Music that Challenges, Unites and Celebrates.

Across generations and communities, the song serves as a touchstone for people reaching into their past but also singing for the future. Mavis Staples performs a great example of this during her 80th Birthday celebration in May 2019 at the Apollo Theater. On this recording, she shares that this is the first song her father, "Pops" Staples, taught her family, who famously performed as the gospel, soul and R&B group the Staple Family Singers. But Mavis shared the stage last year with musicians decades younger than her, passing the song onto a new generation.

Perhaps the spirit of the song for our times is best captured in the tune, "Daddy Sang Bass," which incorporates the lyrics and melody of "Will the Circle Be Unbroken." The words start off with:

I remember when I was a lad
Times were hard and things were bad,
But there's a silver linin' behind ev'ry cloud.
Just poor people that's all we were
Tryin' to make a livin' out of black-land dirt,
But we'd get together in a family circle singin' loud.

Daddy sang bass, mama sang tenor,
Me and little brother would join right in there.
Singin' seems to help a troubled soul.
One of these days and it won't be long.
I'll rejoin them in a song.
I'm gonna join the family circle at the throne,

Though the circle won't be broken
By and by, Lord, by and by.
Daddy sang bass, mama sang tenor,
Me and little brother would join right in there
In the sky, Lord, in the sky.

To bring this full circle, here’s the 1969 performance of "Daddy Sang Bass," by Johnny Cash at San Quentin Prison in California, where he’s joined by Mama Maybelle Carter, Johnny’s wife June Carter Cash, and other members of the Carter family.

Yes, times right now are hard, but singing together and uniting our circle can help us make it through.

How does redistricting work — and where does the process stand in Wisconsin?
Milwaukee, Madison officials push back on new GOP election probe
COVID-19 booster shots for Moderna, Johnson & Johnson begin in Wisconsin. First dose for young children could be next
UW Health: Stress from the pandemic and skipped doctor appointments contributing to sicker patients
Assembly Republicans pass housing bills, but table vote on homelessness criminalization
More WPR News

COVID-19 booster shots for Moderna, Johnson & Johnson begin in Wisconsin. First dose for young children could be next
In Wisconsin, recall efforts add to pressure on school boards in the wake of COVID-19
Defense use-of-force expert will be allowed at Rittenhouse trial
GOP Senate leaders announce new investigation into Wisconsin's 2020 election
Wisconsin apple orchards seeing a shortfall this year